The Ninja Turtles' ever faithful, ginger human liaison, April O'Neil. Does she make a good addition to Playmates' Turtle figure line up? See after the jump. 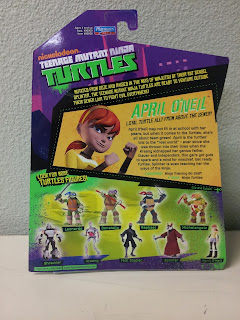 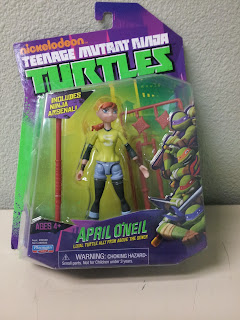 April, like the rest of the line, comes on a Turtle Green and Purple card glued to her plastic prison. 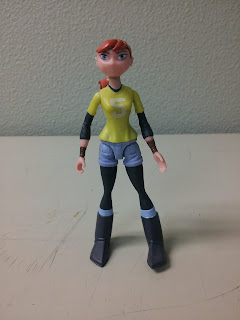 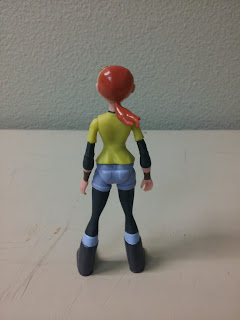 First things first. I absolutely hate this redesign of April. Completely and totally hate it. Back to the figure itself, though. Good news, her sculpt is nice. Unlike the turtles, she looks pretty close to the animation she's based on including awkwardly large eyes. The paint is nice and clear, though, no blemishes that I can see. 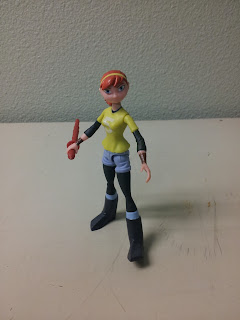 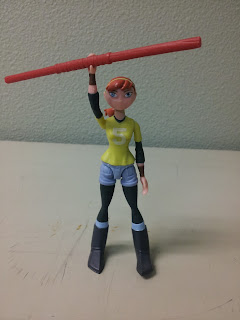 Bad news. She is horribly unposable. She has eight joints: ball and hinge at the hips and shoulders, swivel wrists and waist, ball head. Nothing below the waist. No knees or ankles. Incredibly disappointing. Her right hand is the only one that can hold anything, and her grip is worse than a fish handshake.

She also comes with her selection of weapons. April will apparently be sporting a bo, one bigger than Donatello's, hell, it's bigger than she is. Included as well: practice swords, two shuriken, smoke grenades and what could be a weirdly shaped piece of plastic or an actual weapon, I'm not sure. 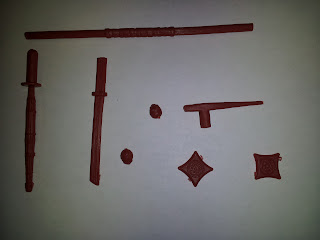 That reminds me, for the uneducated like me, it would have been nice to have a list of some sort included saying what all of these accessories are supposed to be.

In all, unless you're a completionist, April is a completely skippable figure.

Posted by ElfangorTheAndalite at 7:30 AM