Does the Ben Stiller/Vince Vaughn/Jonah Hill bro-fest The Watch inspire laughter or demands for your money back?  Click on the jump to find out!  This review originally appeared on SandwichJohnFilms.com. 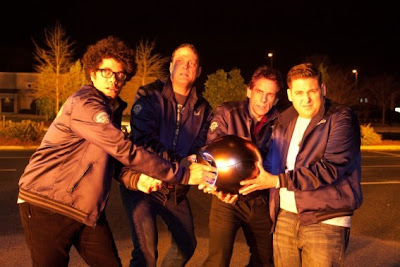 The Watch is the kind of film which mirrors the times in which we live: it's gross, raunchy, and even a bit degrading at points.  Yes, I'm saying society has become dependent on these facets to get anyone's attention.  Add any other adjective/adverb that Google will spit out if you wish to complete the experience.  The problem has been that Hollywood hasn't consistently come up with truly funny raunch, giving us 3-4 terrible efforts for every Hangover or Ted.  The transition to this new lower-brow form of entertainment has not been without its bumps.  Luckily The Watch doesn't fall into the abyss of terrible mishaps; instead, it's a hilarious romp through the world of alien invasions, low sperm counts, male genitalia, and underage drinking.  Ok, that doesn't sound as appealing as I write this, but follow me on this one.

Evan (Ben Stiller, There's Something About Mary) is the manager of a Wisconsin Costco; an organizer of various social clubs, his life is boring, predictable, and he likes it that way.  All of that changes when his night guard is murdered, inspiring Evan to announce the formation of a neighborhood watch to find the killer.  Instead of landing a few organized volunteers ready to lend a hand, he gets the party animal Bob (Vince Vaughn, Swingers), the head case Franklin (Jonah Hill, Superbad), and the fashionable Brit Jamarcus (newcomer Richard Ayoade).  The guys are more ready to bro it up than fight crime, and Evan can't control their hi-jinks.  It's not until the team comes face to face with the killer (who happens to be an alien) that they learn about a world-wide invasion that will soon destroy the Earth, if a communications array being assembled underneath Evan's Costco isn't put out of commission.  Together with his wife Abby (Rosmarie DeWitt, United States of Tara), Evan and his crew try to save the world, all while dodging alien goo, half-eaten corpses, and Franklin's fascination with underage girls.

The writing team of Jared Stern, actor Seth Rogan, and Evan Goldberg have created a ridiculous but ultimately humorous premise that also allows for Vaughn and Stiller to ad-lib often, creating some of the movie's funniest moments.  There's just enough cheesy dramatics to offset the raunch-fest of alien genetalia and homosexual suggestions which permeate the script.  Yet unlike other failed comedies this year, The Watch pushes just enough buttons to cause laughter (albeit based on gross premises) without crossing the lines which That's My Boy didn't realize existed.  Vaughn has basically played the same character since Mr. and Mrs.Smith, sometimes with less-than-expected results.  Not here: Vaughn is back to hisWedding Crashers form, strutting for the fans like a peacock in search of a mate.  Stiller plays a terrific deadpan to Vaughn's antics, and both Hill and Ayoade fire off several hilarious moments of their own.   Even the casting of an uncredited Billy Crudup (Watchmen) as Evan's new weird neighbor pays off as the team learns that this alien suspect is actually running a large orgy in his basement.  Agreed, the suspension of belief one must undertake to enjoy The Watch is high, but the payoff for doing should reward audiences.  Director Akiva Schaffer (SNL's The Lonely Island) squeezes every bit of pulp from the script while still allowing his actors the ability to stray off course a little for the sake of themany laughs he and writers have concocted.  He also employs some funny Matrix-like edits near the end of the film, as well as many other gags which gladly don't appear in the trailers.

This is the fifth movie for Stiller and Vaughn, and with Schaffer and Hill joining the fray, this could spell good fortune for those of us who enjoy well-constructed dirty humor films.  This team is fun to watch and the subject matter just preposterous enough to set an early tone.  The Watch doesn't take itself too seriously, and nor should audiences.  Even with the filters off it still might offend, but I guarantee you'll laugh along the way.  In a year that's seen its share of truly terrible over the top films, The Watch proves you can make a raunchy film without sending society over the edge.  The Watch is rated R for almost everything but nudity and has a runtime of 98 minutes.
Posted by Matt Cummings at 12:00 PM