Punisher was one of the first figures in the Marvel Universe line, and I couldn’t have been happier. From the first time I saw him, the Punisher was one of my favorite Marvel characters. He wears black, he has a big skull on his shirt and he has a big arsenal. If that’s not enough for you, then you shouldn’t be reading comics. We’ve gotten a few versions already, so my initial thought was, “do I really need another Punisher? The first one was pretty good, right?” So, did I need it? Read the review to find out! 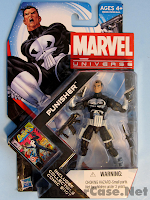 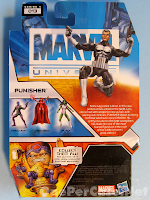 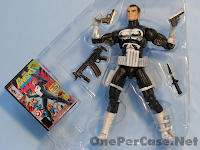 I think the picture on the card could have been better. It’s not bad, I just don’t think it’s as good as it could have been. Maybe Hasbro was hesitant to have a picture of a guy blasting guns, but c’mon, he’s the Punisher. Yes, he’s still the Punisher… not “Marvel’s Punisher”. Thanks for that. He’s packed with guns, his mini-comic cover shows him holding guns, so why not go for the trifecta? Overall though, not a bad look. The mini-comic cover features good “Acts of Vengeance” artwork (a fun series, if you haven’t read them). Of course, that wacky MODOK is on the back taunting us. MODOK, if you really want people to collect them all, make them easier to find! 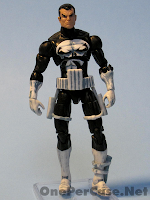 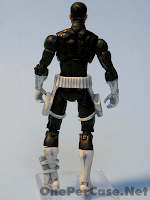 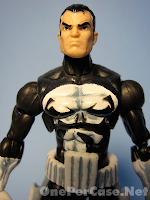 I really dig this sculpt. The head is very well done, and easily the best looking Frank Castle face we’ve gotten to date. He’s got working holsters, a sheath for his knife, a decent looking belt and a mean sneer to give him some attitude. The bad part of the figure is the overdone paint wash. I’m not opposed to washes, but this is just too much. I think the highlight/lowlight of the wash is on the skull logo. It’s just too much. 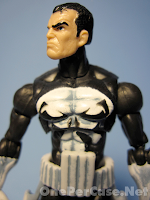 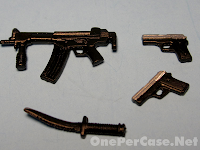 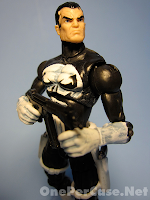 Given the general lack of accessories in the Marvel Universe line, I was glad to see Hasbro didn’t cheap out on the Punisher. What’s the Punisher without a good arsenal? He’s packing a pair of pistols, a sub-machine gun and a small knife for backup. My knife came out pretty bendy, but since it’s just going to sit in the sheath on his boot, no big deal. The pistols fit well in the holsters and decently in his hands. The submachine gun works well as a two-handed weapon. Overall, he can carry all his weapons at once, so that’s a win for me. 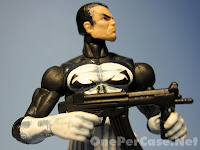 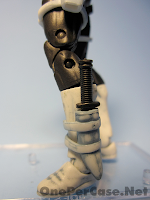 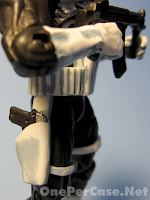 Articulation-wise, the Punisher delivers well. It’s the basic Marvel Universe articulation, and nothing costume-wise to get in the way, which renders him mighty flexible. His arms bend well enough to hold his submachine gun in a natural pose, which is always a plus. 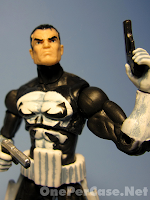 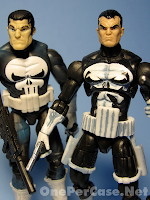 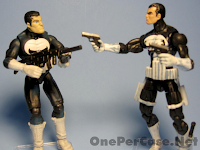 So my concern was, “I already have a Punisher, do I need another?” Well, looking at them side to side, you can really see what improvements there have been to the Marvel Universe line over the years. The sculpt is more detailed, the articulation has increased, and even the weapons have improved. The bottom line is, yes, the new Punisher figure is well worth the upgrade. Too much paint wash, but otherwise, a winner. 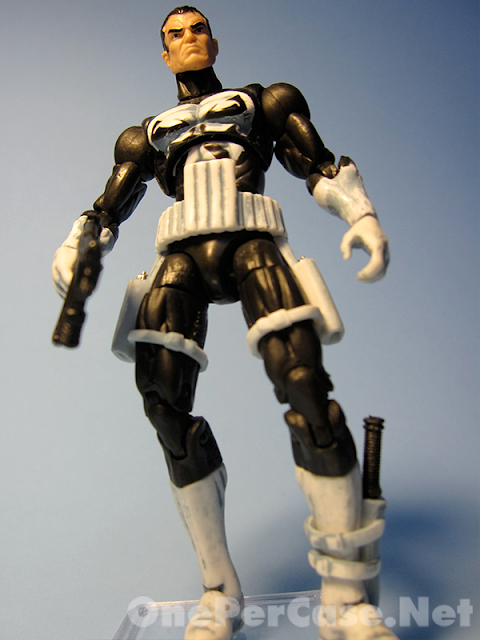 And if you're a Punisher fan, remember, check out this great short featuring Thomas Jane!
Posted by Brett X at 10:11 AM