Sergei Kravinoff has long been a thorn in the side of Spider-Man. Long story short, Kraven was a crazy big game hunter who wanted to bag Spider-Man to show everyone that he’s the greatest hunter in the world. In case you couldn’t tell that he’s a great hunter, he clothes himself in dead animals to prove a point. Well, now Hasbro has given us a Kraven the Hunter. Like all figures, it’s got plusses and minuses. But which does it have more of? Read the review to find out! 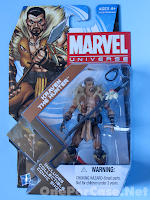 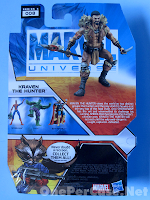 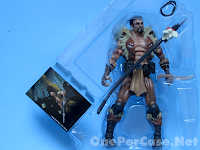 The picture Hasbro selected for the packaging art isn’t my favorite, but it’s good. Just something about the face that bugs me. Not really sure where the image for the comic shot came from. Since I don’t care for the mini-comic covers, I won’t bother doing the research to track it down. In a nutshell, it’s a nice enough cover, but I would have preferred some Steve Ditko art, but I’m 12¢ like that. Once again, that rascally raccoon is on the back telling me to buy more toys. If he’d seen my garage, he’d know I don’t need a medium sized mammal pointing a gun at me to make me buy more toys. 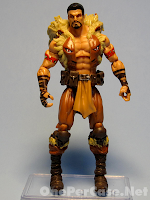 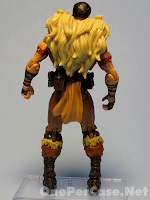 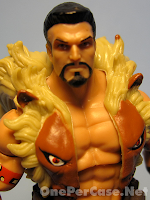 Let’s start by looking at his accessories. In addition to his removable vest, Kraven the Hunter comes with a necklace, knife and spear. That’s about the most you’re going to get these days from a Marvel Universe figure. Typically it’s one or less. The necklace looks ok, but doesn’t lie very well. Also, not sure how I feel about an accessory that I have to remove the figure’s head to put on. Not that it’s a chore, but I guess there’s a part of me saying “I shouldn’t have to take apart a fully assembled figure”. The knife, while fairly plain, hold well in his hand. The spear looks good and holds well, but the plastic is overly malleable, which makes it tough to straighten out. Wavy spears are for Lamar Latrell, not Kraven the Hunter. 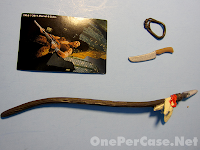 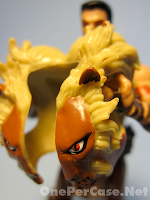 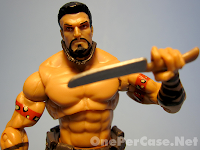 Once of the first things that stands out about Kraven the Hunter is all of the unique tooling for his costume. This wave of Marvel Universe really trims down on the parts reuse, which is always a plus. From the vest that stares back at you down to the skull knee pads, there’s a lot to like about Kraven. The fur on the back of the vest isn’t super intricate, but just detailed enough to look nice. His arm bands and forearm wraps look legit, and the belt, pouches and loin cloth have some great detailing. The kneepads and leg wraps/boots are about as much as you can hope for in a 3 ¾” scale figure. 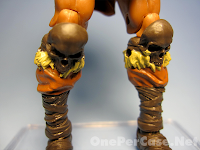 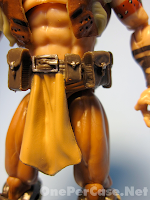 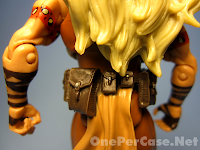 The head sculpt is a nice representation of Mr. Kravinoff. He’s complete with slicked back black hair, goatee and eye makeup. Ok, so he might not need the reddish color around his eyes, but I don’t think it detracts any from the figure. His scowl gives him a bit of a cocky look, which is good for the self-proclaimed world's greatest hunter. Really, this is a solidly sculpted figure. 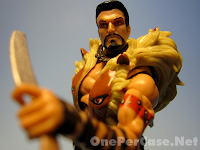 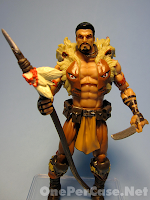 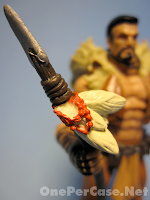 Kraven’s got your basic run of the mill Marvel Universe points of articulation. Since the vest has no sleeves (hence, a vest), it doesn’t interfere with arm movement. Similarly, the loin cloth doesn't hinder leg movement much, and only gets in the way if you try to make Kraven crouch too much. Not really a lot else to say here. A hunter needs to be able to move, and Kraven can move well. 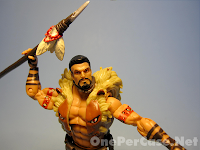 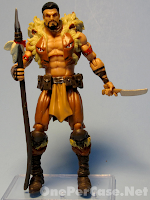 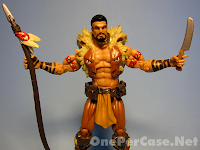 All in all, this another Marvel Universe figure well worth tracking down. We still need more bad guys in the Marvel Universe line, and Kraven the Hunter is a great addition. This wave is just starting to hit some parts of the country at Meijer’s, so hopefully he’ll be somewhat widely available soon. 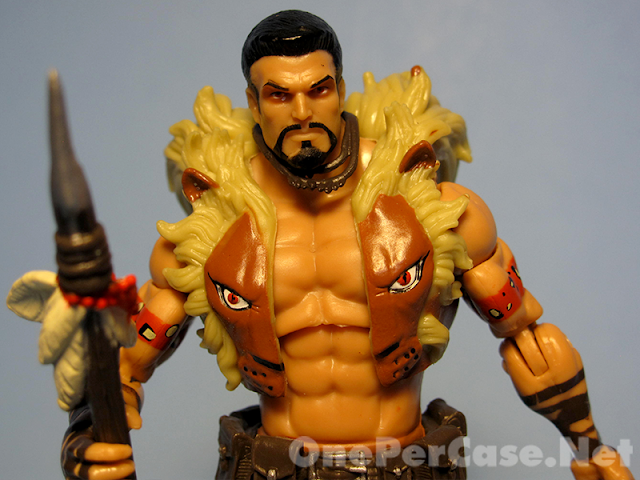