This is the figure I’ve been waiting for since I first heard that a 3 ¾” Marvel line was on the way. Ever since I laid my eyes on Thor 337 as a kid, I was blown away by the fact that there was an alien Thor. Wait, I thought only the man worthy of the power could lift the hammer, but this alien has it! What could be cooler than that? Well, a few years into the line, Hasbro has finally delivered a Beta Ray Bill for all to enjoy. So was he worth the wait? Read the review to find out! 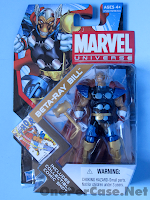 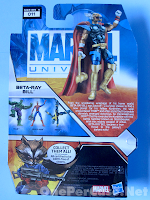 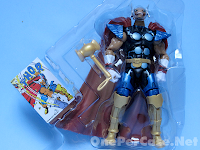 This is a great looking packaged figure. The artwork is fantastic, the golden/white nameplate looks regal, and Hasbro picked the proper cover art for our token “collectible comic shot”. I’m still not a fan of the mini-comic cover, but at least they used an iconic Beta Ray Bill solo shot. On the back, for some reason Rocket Raccoon is goading us into buying more figures. Well, keep picking characters like Beta Ray Bill, and you got yourself a deal, little man. 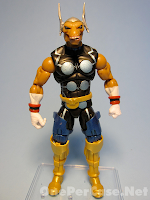 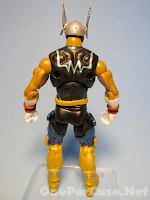 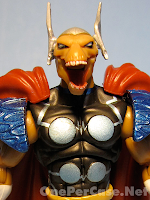 The first thing that stands out on this amazing design is the articulated jaw. Hasbro, I cannot thank you enough for not cheaping out on this, which certainly would have been easy to do. Past that, we’ve got the standard MU articulation that we’re all more than familiar with at this point. A little wonky looking at some parts, but very flexible. Great thing, because there’s a lot I want my Beta Ray Bill to do. 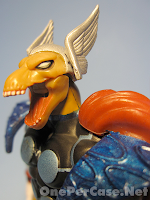 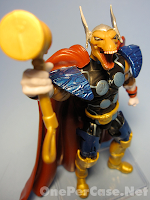 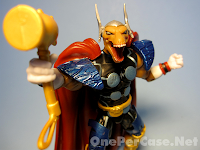 Technically, I suppose you can count the cape as an “accessory”, since it is removable. It attached by way of a couple of pegs in Bill’s back, and stays in place reasonably well. Since it’s made of a rigid plastic, it can knock around a little if you get into any serious poses, but overall it stays on. The attached shoulder guards look nice, but once again they can interfere with poses, as his upper arms will get blocked a little. 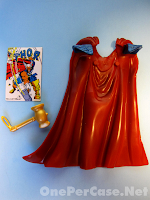 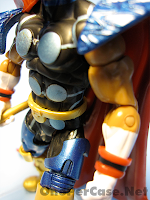 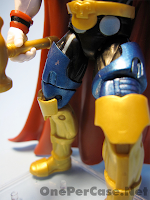 The “true” accessory is, of course, Stormbreaker, which is Beta Ray Bill’s version of Mjolinir. The mold is good, the color is good, and it stays in Bill’s hand well. That’s the trifecta of goodness when it comes to an accessory. 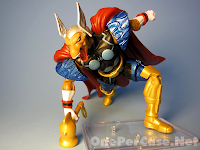 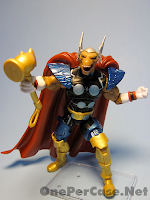 Beta Ray Bill has the face only a mother could love. Well, a mother or a raving fan boy. The head sculpt is quality work, and once again the articulated jaw is a great addition. Hopefully it doesn’t get floppy over time, but for now it holds well. The helmet looks fantastic, and who doesn’t love a good winged helmet? The upper body, as you may guess, borrows heavily from the Thor mold. I can’t really fault Hasbro for that, and if you do, you’re a picky bastard. I really think his arms should be a little bigger, but they’ll do. Gloves looks great, hand holds the hammer, and his boots look amazing. Again, I think the legs could use a little more bulk, but they still look great. Overall, this is amazingly solid work on the sculpt. 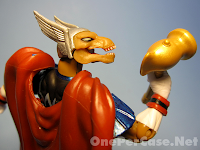 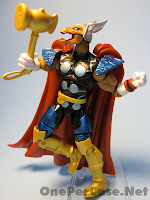 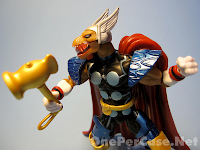 I built up a lot of hype for this figure. This has been one of my favorite characters for over two decades now, and so I knew I would give it more scrutiny than most figures. Kudos, Hasbro. You’ve done well by Beta Ray Bill. On behalf of the Korbinites, I thank you! If you have any interest at all in Marvel figures, go out of your way to find this figure. You will not be disappointed. 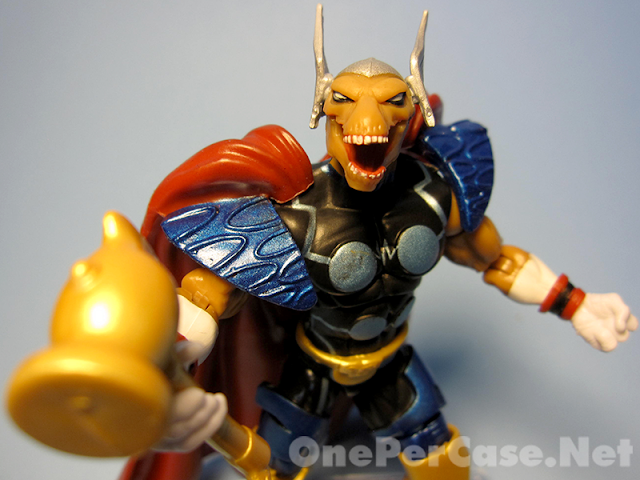