Probably one of the lamest X-Men characters of all time ever. Her mutant powers include shopping at the mall, tickling people with fireworks from her fingertips, and generally being annoying. Is the figure any better than the character? The answer to that question and many more, after the jump.

Yeah so I don't like Jubilee. Never really have. She's annoyed me as a character pretty much since the first issue I read with her in it. Then the cartoon made me hate her even more. She's a part of the still-a-long-ways-off-from-being-released-in-the-US wave 21, or at least what I believe to be wave 21, but it doesn't have a wave number listed on the case I got from Robot Kingdom in HK. I suppose the wave numbers could have shifted since being announced at NYCC 2011. Who knows. I don't think even Hasbro knows any more. Either way, the wave includes only 3 figures. Last week we looked at Professor X, now we look at his student and wave-mate, Jubilation Lee. Dumbest. Name. Ever. (No offense if any of our readers are actually named Jubilation Lee.) 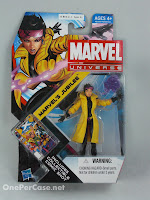 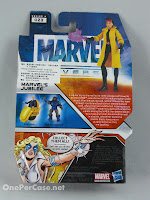 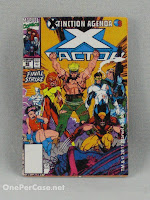 I have to admit, Jubilee's packaging and card art actually look really good. The yellow and black for the name card is fitting, and unlike some of the other artwork in the 2012 series, this drawing of Jubilee is pretty awesome. The comic cover choice is a bit odd though. It doesn't seem particularly iconic for Jubilee. It's like they just chose the first cover they found in a random long box that had her on it. Dazzler is once again on the back of the card, this time bragging about her roller skating skills. Again, you'll see Asian language stickers on the card back pictured here, since this figure came from Hong Kong. 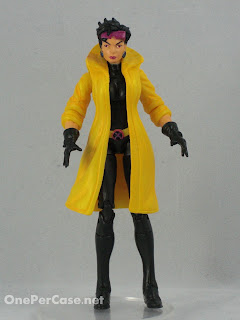 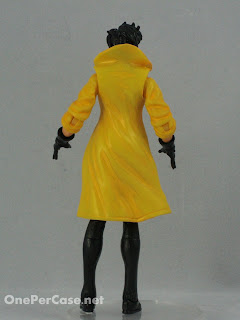 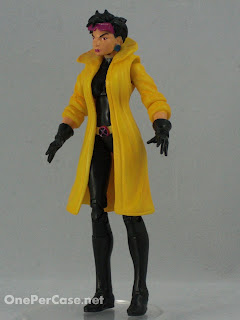 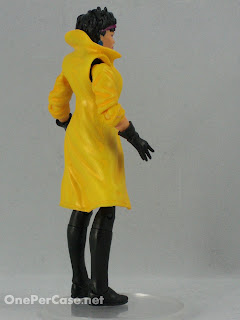 As a figure, Jubilee isn't horrible. Thankfully, she at least uses the newer female body first used on X-23, with new arms, head and jacket. So her articulation is great. Thigh-swivels, rocker ankles, the whole shebang.  Unfortunately, the jacket hinders her hip articulation a bit.  But that's to be expected on figures that wear long jackets. The new head sculpt is good enough and looks like Jubilee, but watch out for the eyes. Every sample I've seen so far (online and in person) has had a terrible case of what I've scientifically and medically designated as "the derp". That is, her eyes are looking off in different directions. It ruins an otherwise good looking face. Some are worse than others, but none are great. Of the two Jubilees that came in my case, I chose to open the one with the least derpy eyes, but I would still assume that this poor girl is the result of inbreeding, or growing up under power lines, or being hit in the face with the ugly stick too many times as a child. 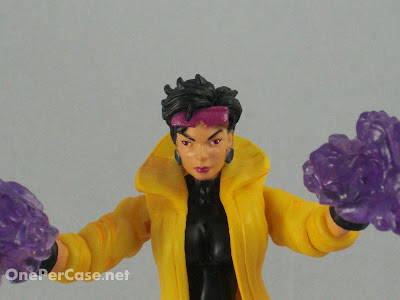 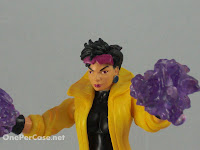 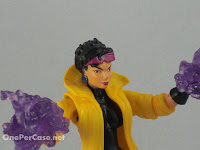 The sculpt for the new jacket and arms is also pretty decent, but Hasbro did something with the paint on these pieces which really pisses me off. They did the same thing on the Target-exclusive tiger-stripe Wolverine (pictured below). They used a yellow wash on the yellow plastic, which looks good and brings out the detail in the sculpt, but for some reason constantly results in stuck joints. On the Wolverine, it's not a huge deal, it just makes it hard to bend the knees. But on Jubilee, it results in stuck elbow joints, and while I was trying to move her right elbow, the arm snapped off clean at the joint, with the elbow peg still in the bicep socket, Fantastic. Out of the package for a minute and a half and SNAP. I don't know if it's the yellow plastic, the yellow paint wash dried in the joints, or a combination of both, but any time you see this combo on an MU figure, be CAREFUL. So, I opened the second Jubilee from my case, swapped the less derpy head onto her, gave her both blast effects, and dumped the now armless Jubes into my fodder bin. 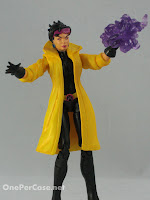 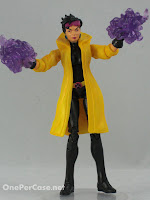 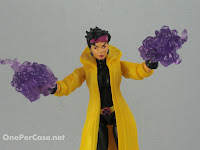 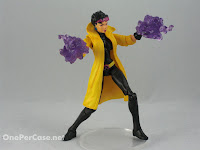 So yeah, don't expect your Jubilee to come with two of these blast effects. That's the minor benefit to an otherwise unfortunate quality control issue. The blast effect is nice, though. It's a new sculpt and fits well on either hand. This figure would've been that much better if it included two of these in the package. 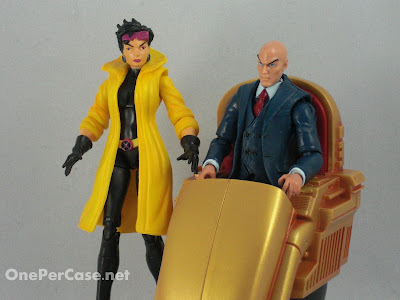 I don't hate this figure as a whole, I just wish I could like it more than I do.  The QC issues, on top of the fact that I personally am not a fan of the character, add up to something squarely between "decent" and "craptastic" for me.  If you want to add this figure to your collection, the wave is currently available in Asia and Mexico, and will apparently be available in the US and other locations sometime between tomorrow and early 2013. 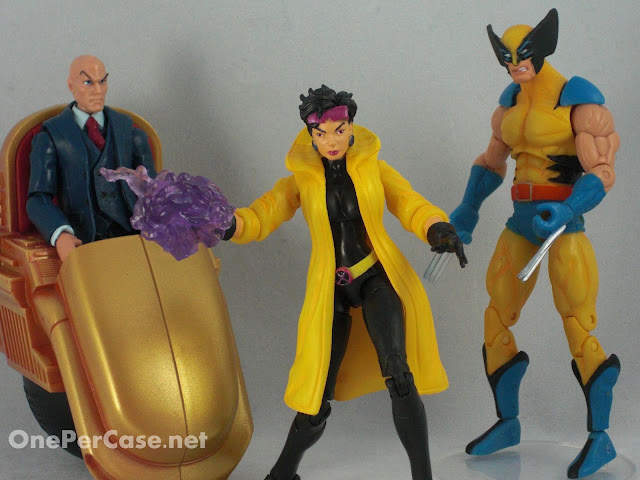