Included in my Wave 21 case from Hong Kong was this variant of the yet-to-be-released Future Foundation Spider-Man, slated for Wave 19. Is he worth tracking down? Duh. How could anyone NOT want a figure with a paper bag on its head. More after the jump.


So the regular white-with-black-markings FF Spidey isn’t out yet, and early indications are that the initial Wave 19 cases will also include this variant (this sample came in a Wave 21 case from Hong Kong). We’ve seen the black-with-white-markings comic pack version, so now let’s take a look at the original “Spidey in a Fantastic Four costume” interpretation.

For those not in the know, this obscure rendition of the wall crawler was long lobbied for by certain high profile action figure journalists as well as a certain (now former) head of the Marvel Universe line at Hasbro. And 4 years into the line, we now have what has to be the first action figure ever produced with a paper bag over its head. If you haven’t noticed, the humor of such things is not lost on us here at One Per Case. 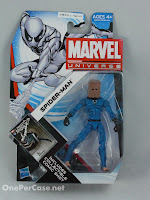 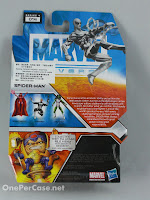 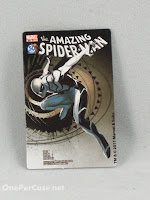 The figure’s packaging obviously depicts a very different costume than what is included here, and to some casual fans, the connection between the two costumes will surely be lost. The artwork looks great, but with there being such a big difference between these two costumes (there is literally NOTHING shared in common between the two), I almost think it would’ve been better for Hasbro to have at least referenced both costumes on the back of the package, if not create a whole new card back for this version. I just foresee too many confused consumers scratching their heads over this one in the toy aisle without there being some obvious connection or explanation on the back of the package. But hey, at least the card art looks good. 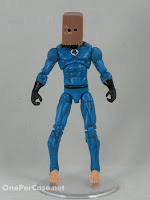 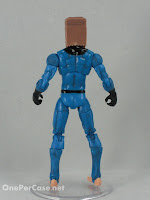 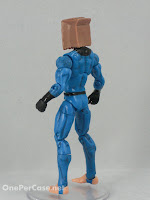 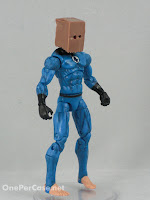 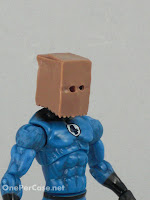 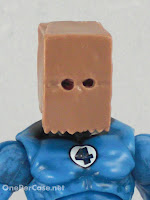 The figure uses the same mold as the comic pack FF Spidey, which in turn was previously used on Jim Lee Cyke, Steve Rogers, Daredevil, Bullseye, Namor, etc. It’s my favorite body sculpt in this line to date, with all the latest and greatest articulation, including thigh and calf swivels, ankle rockers, and just about every other POA you’d hope to see on a 3 ¾” figure. But, as I’ve mentioned before, this is the wrong body to use for Spidey. Spider-Man should be less buff, more slender, and smaller looking than Steve Rogers. The figure looks great, but it doesn’t look like Spider-Man. Another recurring complaint: No thwippy hand. How is this guy supposed to be believable as Spider-Man without at least one hand posed as if he were about to shoot web in your face. 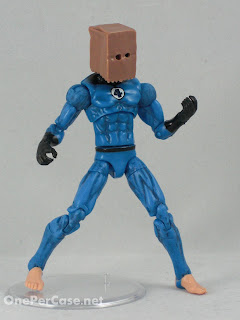 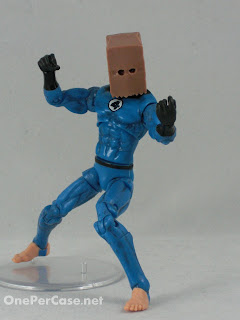 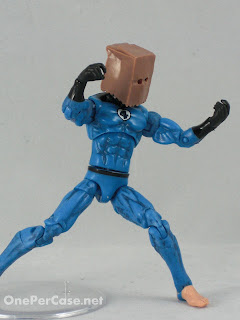 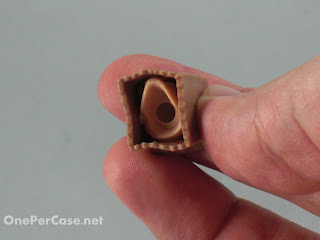 This particular version swaps out the normal booted feet for retooled bare feet from Namor (without the wings). The only new piece of tooling is the head, and the bag over it. This figure actually features a brand new Peter Parker head sculpt, unpainted, with the bag glued on over it. I haven’t risked ruining my only sample of this figure to remove the bag yet, but other people have, and trust me, it’s there. That’s a pretty good indication that Hasbro will eventually re-use the head to give us an unmasked Peter Parker. So, bonus points for new head sculpt with obvious future potential. 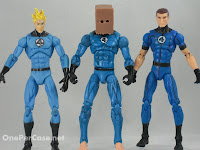 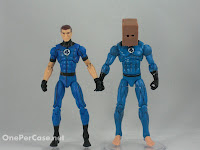 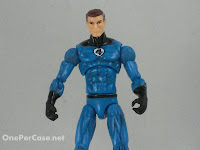 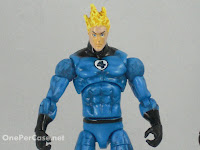 The paint on this guy is pretty solid with no real blemishes or mistakes visible on my sample. The lines are straight, the shading is done well, but, the one thing that bugs me is that this is once again a unique Fantastic 4 paint job. It doesn’t really match any of the previous F4 figures, so having this Spidey pose with Johnny, Reed and the rest of the gang makes him look a little out of place. But I think it’s the best looking F4 paint job yet, so now I want more of these figures to turn into Johnny and Reed (though the body is probably too buff to be Reed, as well), and of course, Thing and Sue to match. 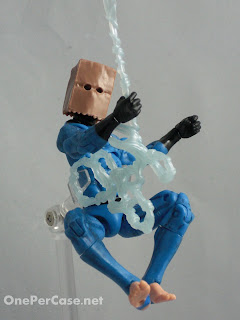 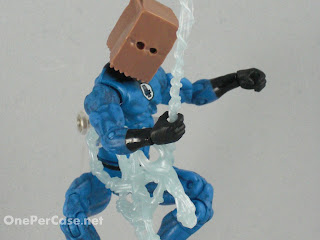 Surprisingly, this figure didn’t come with any sort of web accessory. Or any accessory for that matter. The comic pack one came with (the admittedly lame) web accessory from the Series 1 Spidey figure (which is what I used for these photos), so I kind of expected this guy to come with it, too. But nope. I’d really like to see the awesome web accessory that came with the SDCC movie Spidey a couple years ago re-used in this line. And of course, at least one swappable thwippy hand. Those accessories should be no-brainers. But alas, there was nothing in the bubble. 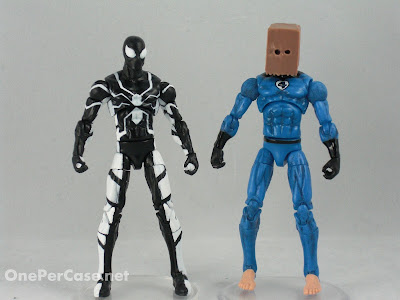 The lack of a Fury File, figure stand, and accessories, with only a cheap cardboard art print and a new head sculpt on a re-used body, make this guy suffer a little in the “value for your dollar” department. BUT, this guy is still a pretty awesome figure, because, come on, paper bag head. Duh. Early indications are that this guy won’t be too hard to find, at least at first, being packed two per case in the initial Wave 19 assortment, and at least once more in the Wave 21 case. There’s a Wave 19 Revision which may or may not include the regular FF version of this figure. So actually, the regular version may be the hard to find one. At least at first. But as with many other notable variants in this line, once this guy ships, he’s likely not to return. So snap him up when you see him. Especially if you want a couple extras like I do. 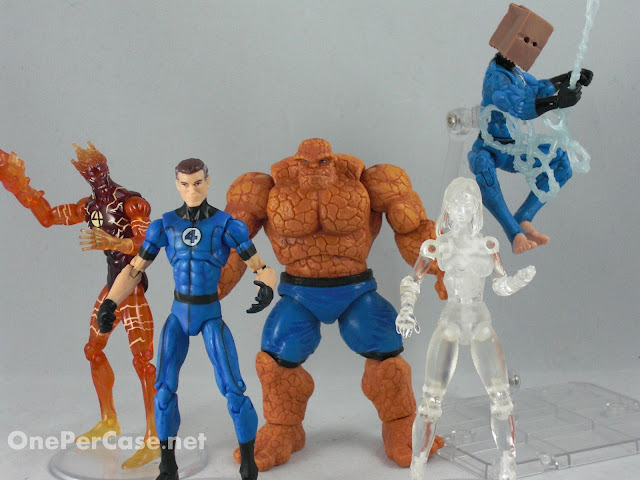