Here's the second of the two Disney Store exclusive Marvel Select figures based on The Amazing Spider-Man.  Previously, we looked at the unmasked Spidey,  and the non-exclusive Lizard.  Now we review the metallic version.  Is it worth plunking down another $20+?  Find out after the jump.

This figure was harder to find than his unmasked counterpart.  While that one was readily found in my local Disney Store on multiple occasions, I never once saw this version in stores, and had to resort to waiting and buying him once he went up on the Disney Store website. 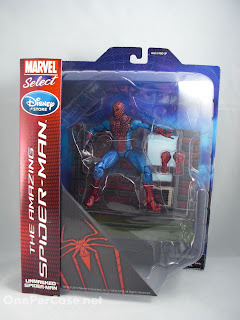 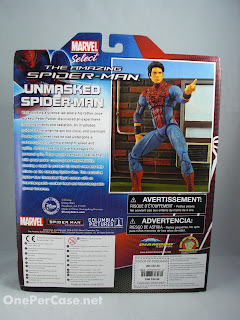 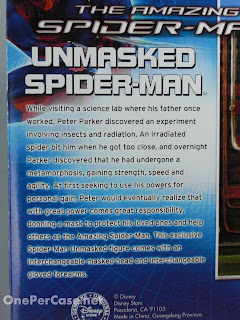 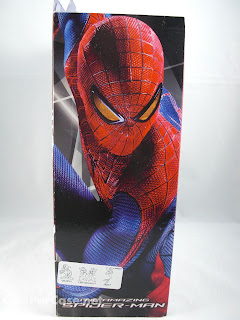 Here's my theory on why:  This figure erroneously comes in the same packaging as the unmasked figure.  The  front of the bubble says "Unmasked Spider-Man" while the back of the card depicts the unmasked, non-metallic figure.  And this wasn't just a one-off error.  I ordered two of these, and they both came this way.  So I'm thinking this might have something to do with this figure being held back and only sold online.  Just a hunch.  Despite being completely wrong, the packaging is pretty nice though, as I mentioned in the review of the unmasked figure. 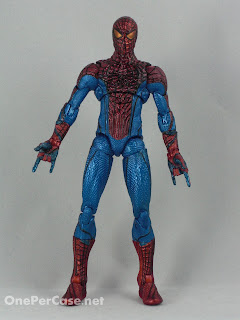 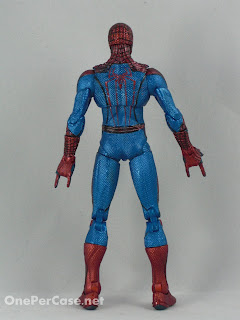 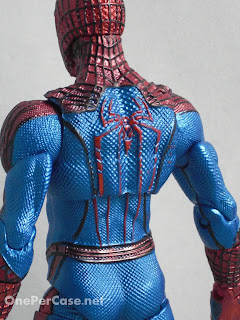 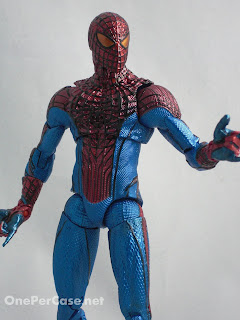 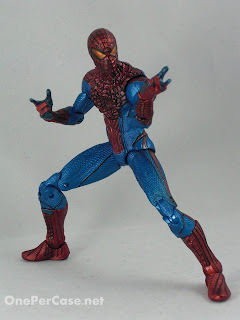 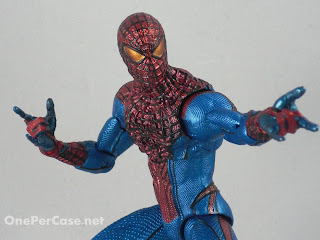 The figure itself is basically the same as the regular non-exclusive release, but with metallic paint, which I think makes him look better and somewhat more movie accurate.  The regular and unmasked versions were too lightly colored.  The paint is pretty well applied, though like the unmasked version, the black lines get just a little sloppy in a few places, most notably on the lower half of the face.  But my biggest complaint with the paint isn't with how it was applied, it's with the fact that it caused almost ALL of the joints on my figure to be stuck.  I had to use a hair dryer to completely disassembled the figure to un-stick all the joints and free up their range of motion. 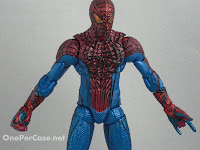 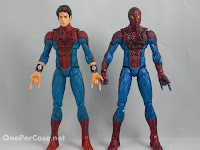 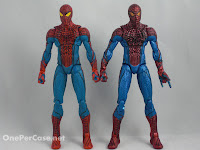 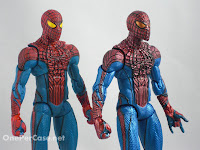 But while I had the figure disassembled, I was also able to remedy my second complaint with the figure, and this is actually something I also noticed with the unmasked version after I published that review; his shoulders were assembled backwards.  After poking around a few forums, it looks like this is actually a common problem on most samples of the ASM Select figures.  It's not super obvious right away, but you can tell by checking to see if the red and blue areas match up with the corresponding sections between the chest and shoulders when the arms are in a relaxed, arms-at-sides pose.  So I swapped the shoulders around to be correctly oriented.  After re-assembling the figure and restoring his range of motion, I'm much happier with him.  It's just annoying because I shouldn't HAVE to fix a figure out of the package.  I expect this from Hasbro, but I expect a higher level of quality control on a $20 specialty figure from Diamond Select. 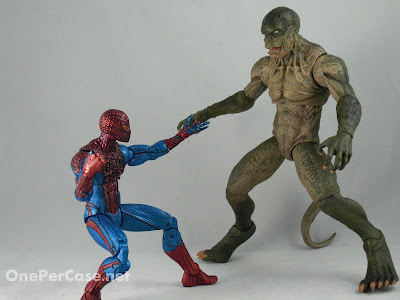 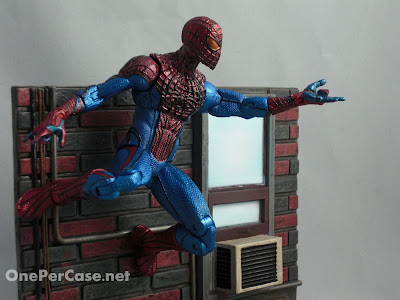 Still, I think this figure is superior in many ways to Hasbro's offerings.  The sculpt and articulation (which is identical to the unmasked version) are superb, and rival Hasbro's versions.  At least, as best I can tell... since their 6-inch ASM figures STILL haven't been released in the US.  But that's a rant for a different soap box. 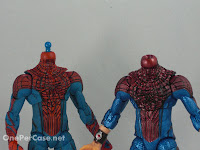 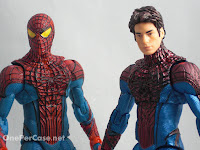 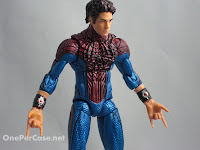 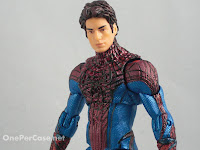 While I'm generally impressed with this figure, after fixing it's minor flaws myself, it still leaves a bad taste in my mouth for one main reason.  The metallic and the unmasked figures should have been combined into one release.  I would have rather just had to buy one figure with the premium paint job AND all the swappable hands and unmasked head.  After seeing the metallic figure in person, I have no desire to display the non-metallic version.  I'd rather just snap the unmasked head/hands onto this version from time to time.  Which is technically possible, but I shouldn't have had to spend an extra $24 after CA sales tax to do it.  And I say "technically possible" because for some reason, when I pull the masked head off this figure, it pulls out the double-ended ball-bar from the neck, whereas on the unmasked figure, this bar stays in the neck.  This means that I have to just set the unmasked head on the neck with no ball snapping into the socket to secure it.  Annoying. 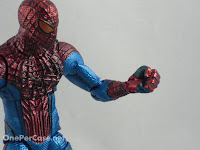 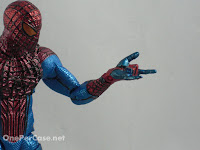 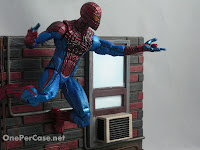 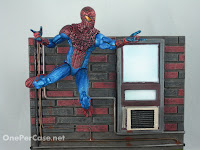 This figure includes the same wall/window diorama base as the others, and the same swappable hands as the mass-release version, meaning we get the fists AND the gloved thwippy hands!  Hooray for thwippy hands! 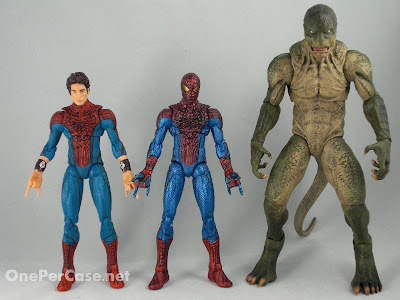 Over all, if you don't mind spending a little bit of time to fix the figure up after opening it, it's a great figure, but I'd really suggest just picking one (unmasked or metallic) and sticking with it.  It stings a bit having to pay the price for both of them just to get all the parts that could easily be included in one for the same price.  If you decide that this is the one you want, he's available from the Disney Store website, and may be in some retail Disney locations. 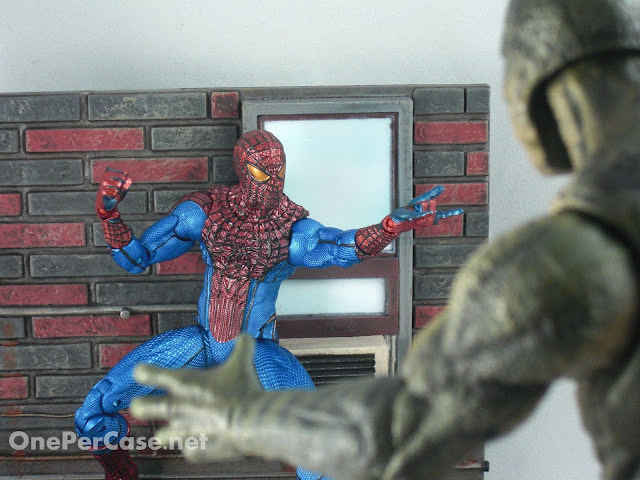