Does the long-awaited Hot Toys Tron: Legacy Light Cycle satisfy or disappoint?  Click on the jump to find out! 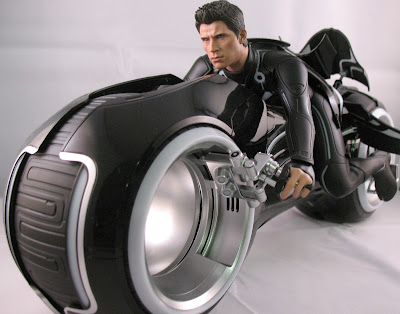 Unless you were locked in your Mistress' basement in 2010, you probably went to the theatres to see the terrific Tron: Legacy.  Unfortunately, the success of the follow-up to the 1982 Buena Vista film did not translate into success in the toy aisle.  Plagued by a disappointing line of 3 3/4" figures (some of which never made it to shelves), American collectors were let down while UK fans got received much better products.  Soon after the toy line was eliminated, Hot Toys answered our prayers: they and Sideshow would produce a line of collectibles including a Sam Flynn Light Cycle.  The pictures and video looked amazing: a 15" light cycle with a 12" Sam figure energized the community, leading to a successful pre-order. 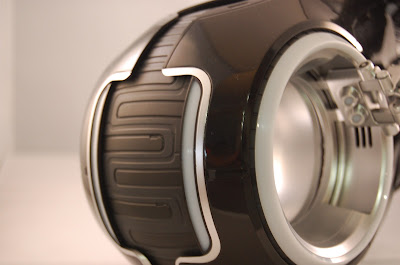 Then we waited...and waited...and waited.  Deadlines were missed, and distribution dates became as hard to keep up with as Rinzler's dual Identity Discs.  Nearly two years had passed, leaving many to wonder if the collectible would be produced at all.  It wouldn't be until July 2012 that Hot Toys would finally release it for sale, leaving many to wonder what took so long.  Does the release quell concerns, or add another frustrating chapter to the merchandising mayhem that was Tron: Legacy? 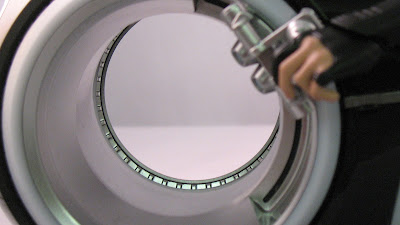 The answer is yes and no.  While the item is a beautiful piece from Hot Toys (complete with a few surprises), it's not without its faults.  Measuring at a staggering 7"x6.3"x16.5", the vehicle weighs nearly 4 pounds, but is surprisingly delicate, which means this little beast requires a soft touch to both unpack and display.  But after doing so, it's clear that the Hot Toys boys took their time to create a nice  piece. 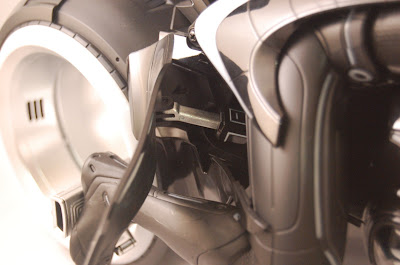 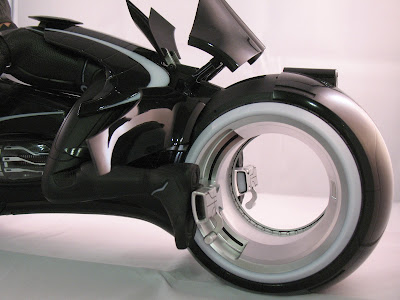 The vehicle is made of a high quality plastic, most of which feels well put-together.  I say 'mostly' because the movable rear air brakes were very troublesome to open and maneuver.  Other sections  (such as the back support surrounding Sam) were also made of the same flimsy plastic which bends too much for my comfort. Getting Sam into position was also a hassle, and I had to take several breaks from trying to work him into place.  Having said that, much of the plastic is well-scultped, painted, and durable, especially around the wheels and main body.  It was surprising to learn that the front wheel actually moves, not that I will be rolling it on the floor.  The air brakes should have been made from another material or a few more layers of plastic should have been added to toughen it. 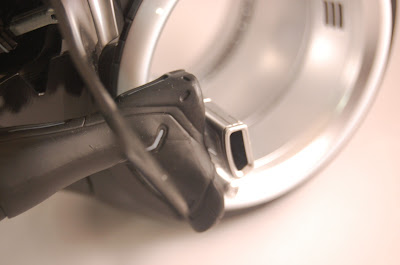 Another impressive feature is that the entire vehicle lights up by simply pushing a small selector at its bottom. The warm glow from 3 AA batteries is pretty striking at night and reminds one of the Tron heritage. 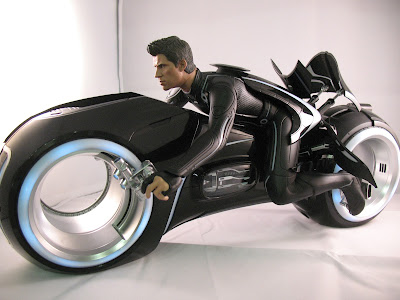 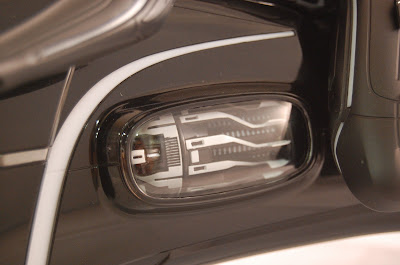 But the most surprising aspect of the light cycle is a motor-driven 'engine' which spins and makes noise upon moving the selector in the opposite direction!  While a neat feature, its effect is a bit wasted and even unnecessary.  Instead of a blender-like sound, the crafters should have added one more in line with the film.  Listen to the engine effects in the film's second act to see what I mean.  A movie-accurate revving engine sound would have completed the item; instead, we got a blender.  Call me fancy, but if I had wanted a blender, I would have bought one and saved the $289 for other Hot Toys figures. 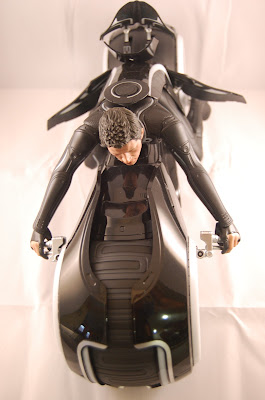 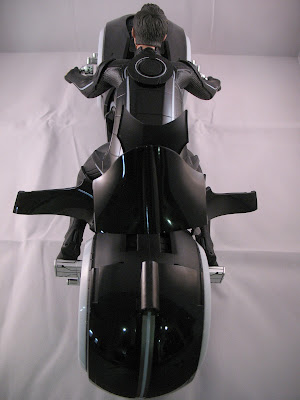 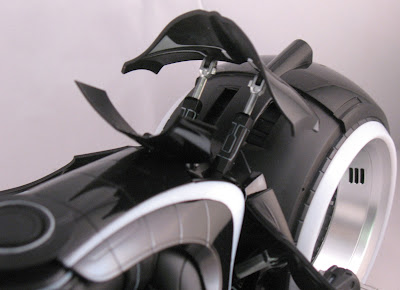 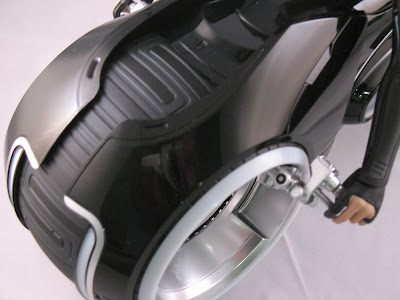 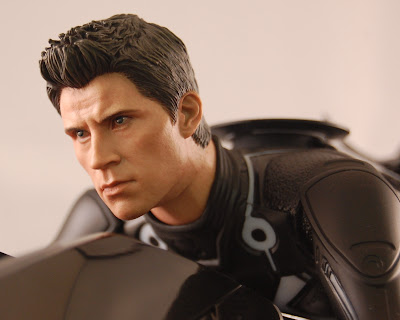 Speaking of figures, let's move on to the rider.  Initially, there was talk of a fully poseable 12" figure which could be added to the bike or displayed alongside.  I suspect my initial excitement was partially based on this news, as it suggested you were getting two separate items, thus raising its inherent value.  Somewhere along the line, that feature was dropped in lieu of a static figure meant to be on the bike.  While that was initially very disappointing, Hot Toys offered something more unique: a light-up figure.  Simply move the selector just above Sam's disc and the figure lights up from neck to ankle.  The trick lies in a body core made of fiber optics or something similar, which extend down the legs and arms.  remove the arms and you'll see a translucent 'chamber' that connects to the extremities.  Everything about the figure screams 'movie-accurate' but that happily has become a given for Hot Toys.  Consider the two head sculpts (helmeted and non-helmeted) you are provided: Sam's facial expression in both is dead on, giving the illusion that the eyes are following you.  The hair and skin tone are also very good. 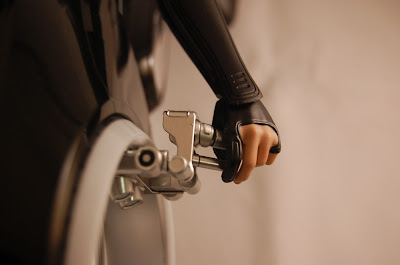 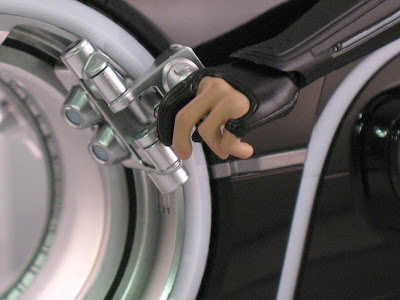 In addition to the heads, you are provided with a set of gripping hands for the accelerators and two sets of legs.  These can be attached to give the rider multiple looks on the bike, and each light up.  The Identity Disc feels a little light in the hand, but is nevertheless durable.  I won't be throwing it at my cats in an odd version of Disc Wars, but it's a good sculpt.  Some have suggested purchasing a PF 'rider' and placing Sam's head on it.  That's an extra cost I hadn't planned for, so unless you have a 1/6 Ducati you want to put him on, it might seem like a wasted effort. 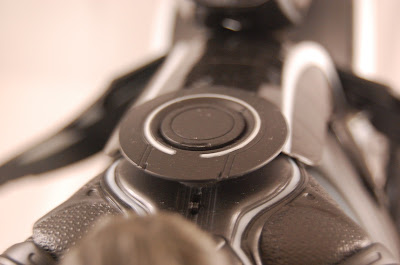 Much like the cycle, problems arise here as well. A shiny residue appears on the shoulders behind the neck that cannot be wiped off. I'm not sure if it's a victim of poor paint or glue, but it's uncommon of Hot Toys to leave such an issue on the table unresolved.  Removal of the head and legs was also problematic - I wouldn't recommend replacing them too often, especially the legs, which were hard to maneuver once on.  It may seem like a small thing, but when you're spending nearly $300 on a product whose company name is synonymous with dotting the i's and crossing the t's, it's frustrating to say the least.  In fact, I'd expect issues like these to relegated to stuff sold at a discount chain. 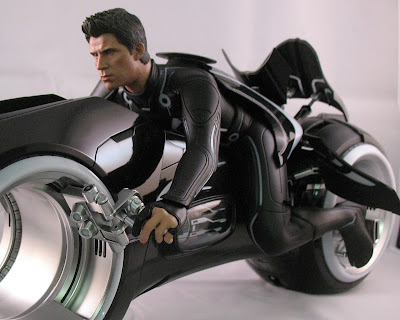 It's a bit of an overstatement, but Hot Toys took their time to bring the Tron: Legacy Sam Flynn Light Cycle to market.  The effect is not a strikeout, but it's not a homerun either.  Dark residue on the shoulders and a blender-sounding engine are major shortcomings that seem strange given Hot Toys's track record.  At the time of this review, the product had sold out - it will be interesting to see whether it holds value, given the somewhat lukewarm reception it's received.  Either way, I would be hesitant to recommend it given the high price tag.
Posted by Matt Cummings at 8:22 PM