Continuing on with my Ninja Turtle Fever is Playmates Toys' Michelangelo, the turtle voted most likely to be a secret pothead. More after the jump! 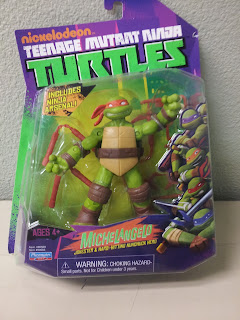 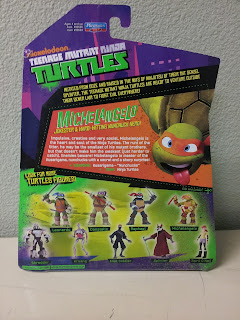 Like Donatello, his packaging is Turtle Purple and Green with a collectable bio card on the back. 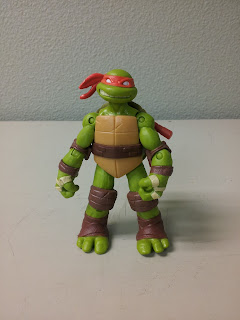 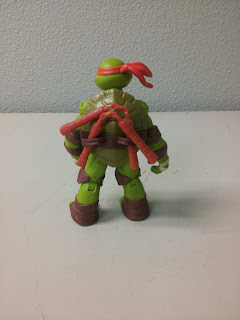 As with Donatello there's not a lot of fanciness going on. The face is thankfully a different sculpt, I would have been disappointed if Playmates was that lazy. Instead they chose to give each of the turtles a little of their own personality, so naturally Mikey has what looks like a smirk on his face. Or maybe he's trying to be menacing, but clearly not doing so. His battle scars are also differently placed showing further care. 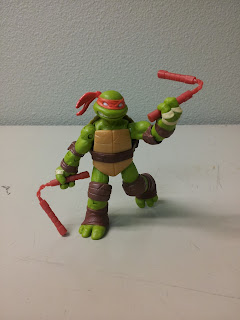 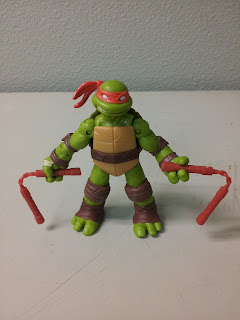 Michelangelo's skin paint is a much more neon green than with Donatello's. Because all I thought when I saw these guys at Target was "OMFG TURTELZ" I didn't really pay as much attention to the details at first as I probably ought to. All of the turtles have different skin colors, which really impresses me. (Yes, I am easily impressed). The articulation is the exact same as the other turtles', so there's some pretty good poseability. 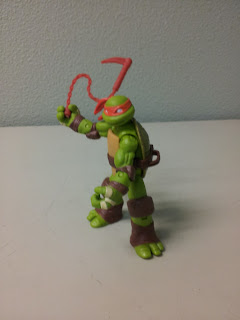 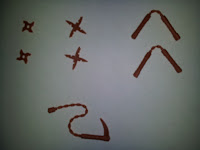 The Turtle in Orange comes packaged with his signature nunchaku, some shuriken and a kurisagama (scythe on a chain/rope). For the record, I took about 30 pictures of the accessories in all sorts of lighting and distances and couldn't get anything nice looking. Anyway. My biggest gripe is how solid the accessories are. There is no movement in them whatsoever. Especially with nunchaku, there should be a bit of bending, but here you'll just stretch out the plastic.


Posted by ElfangorTheAndalite at 2:38 PM