Hopefully I'm not the only one excited for another go at a Teenage Mutant Ninja Turtles cartoon. After the previous series ended in 2009 and the awesome movie that was TMNT, I've been jonesing for some good half-shelled fun. With the show not starting until the end of September, all we have for now are these figures by Playmates Toys that have started making their way to shelves. But will these figures tide us over? Donatello has made me a believer. 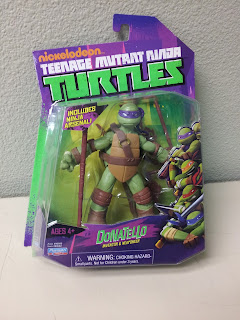 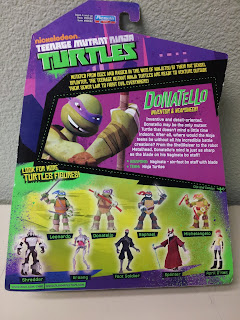 The packaging is a little goofy looking, the color I call "Turtle Purple" quite prominent. The card is pretty simple, nothing on the front aside from the logo and the picture of the turtles themselves kind of getting in the way of seeing what's in the very back of the plastic. On the back, is a collectible card with a bio of the figure you have and a handy list of all the figures in the line. 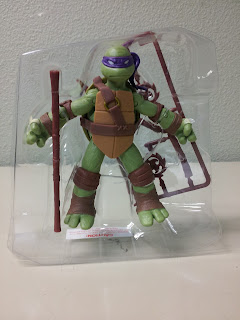 The plastic itself is a little flimsy, but it holds everything in there nicely. Chances are if you get to the plastic yourself, you don't much care about it anyway. 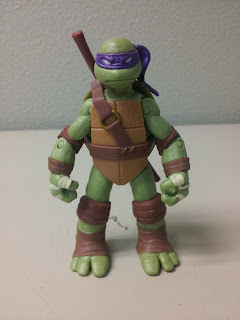 Donatello's (and the rest of the Turtles') charm is in his simplicity. Playmates didn't try to do anything super fancy with the sculpt, but instead chose to focus on the details. Standing at 4.5" tall, has more detail than quite a few of the other turtles figures I've seen in recent memory. The paint is pretty nice, all of the colors are as they ought to be, though I think the skin could be just a little darker. 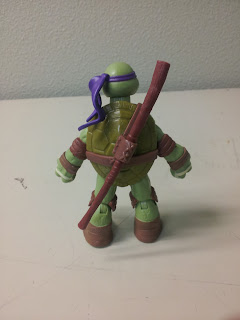 What really impressed me though was the attention to detail. The skin is scaly, just as one would expect from a turtle, which the TMNT movie figures didn't have. There's also slight battle damage all over the shell, braces and bands that reflect the training and use we know the turtles put them through. Over all, as far as looks go, though, Donatello doesn't really look like his new TV show counterpart. That's fine by me since I think the animation style looks a little goofy anyway. 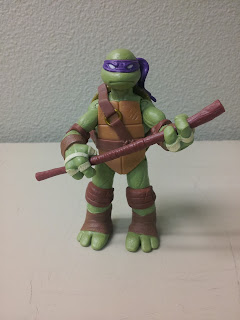 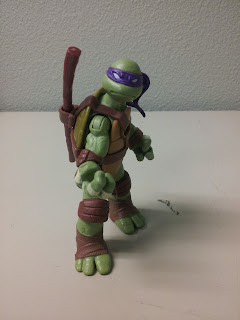 Donatello is surprisingly agile. Swivel and hinge joints at the shoulders, elbows, into the hips and at the knees.  Then the swivels in the wrist are what sold it for me. On most figures, the lack of something, anything at the waist would be unfortunate, but he's a turtle, so duh. 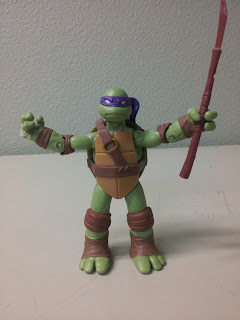 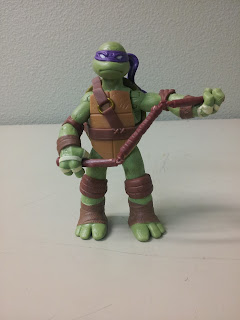 These guys also get packed with a few accessories. Their standard weapons, so in Donatello's case, a bo. But Donatello also got packed with a naginata (a bo with a blade at the end of it), a nunchuk and two saw blades? Shuriken? Seriously, what are those?

All said and done, these are pretty good figures and I will definitely be putting at least the turtles on a shelf at home, but Shredder looks pretty BA too. You can expect to see the rest of these guys up here soon and on the shelves at your favorite store hopefully this weekend.
Posted by ElfangorTheAndalite at 11:11 AM