We can all agree that variants are a pain in the ass...  I love them, but I hate not finding them.  Big Time Spider-Man is the case of the reverse.  The variant was EASY to find!  I found Future Foundation Spidie everywhere...  but in the end, it is actually a case of wave 2 not fully being shipped.

Wave 2 has 4 variants.  4!!!  Good lord that is far too many for one wave.  Not to mention 4 different case packs.  Thankfully, the Big Time Spidie and masked Daken cases have begun to surface.  It seems Target and Wal-Mart both received a few cases at a few stores. (I found them at both)  I pleaded with Hasbro at SDCC to give e-tailers a way to give us a set including all variants, but I don't think it will happen.  Mattel had that process down with BAF waves and variants in e-tail stores.

Marvel Legends will be an ongoing challenge throughout the future waves.  But at least, I am done with wave 2.  To be honest, Big Time Spidie does nothing for me.  I have no connection to the costume or story that inspired him.  But thanks to the wonders of wiki...  I now know and I am compelled to share that info with you.

After a disastrous battle with the new Hobgoblin (Phil Urich) in The Amazing Spider-Man #649 and #650, Peter develops a black costume with blue lights using new technology he created from his job at Horizon Labs, which he begins wearing in The Amazing Spider-Man #650 as part of the Big Time story arc.
It is created with a "omni-harmonic mesh" based on one of Henry Pym's theories, with wave-bending technology to both light and sound with Peter adapting concepts he developed during his work with Tony Stark.
It features several modes, the first which turns the lights on his costume neon-green and gives him the ability to be invisible to both visual and audio means except from certain lens and frequencies so allies can see and communicate with him. The green lights on the costume are for the benefit of whoever needs to see him (while wearing the lens), along with himself, as otherwise he is invisible to his own eyes.
The second mode, which turns the lights on his costume red, can cancel out all sonic-based attacks on his person. A side-effect of this is that it disrupts any attempt to communicate with Peter using sound, and vice versa. Using this principle, Peter developed new, lightweight noise-reduction headphones at Horizon Labs.
The costume contains a new type of weapon based similar in shape to his Spider-Tracers, but created from Anti-Metal (also known as Antarctic Vibranium), which can be fired from the top of his wrist at metal objects, causing them to dissolve. Peter can apparently carry a large number of these new Anti-Metal spiders on his person without them causing harm to his own suit or webshooters.

Being a completest, I had to add him to my growing Marvel Legends collection and like most of the figures from this line, he is really fun to play with!  The articulation makes for dynamic poses.  I would love some spiderwebs to swing him on!
The paint applications of the "green glow" seem a little bit overdone.  The Marvel Legends guy at the SDCC Hasbro booth mentioned they asked the factory to tone down the green on the figures at some point during production.  I am unsure if those have made it to retail yet or if it happened.
In the end, it is just another Spider-Man costume.  One that didn't last.  Yet, here he is.  On my shelf and I find myself wanting the red version of Big Time.... 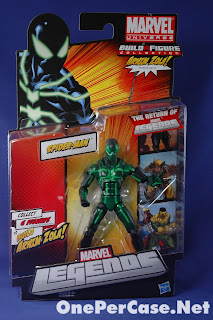 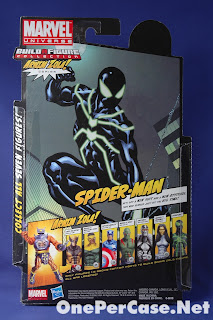 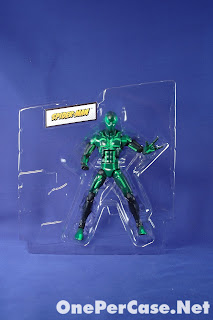 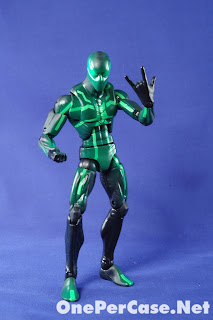 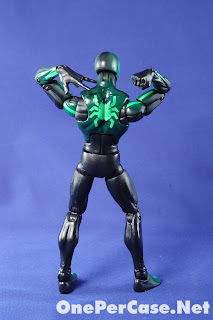 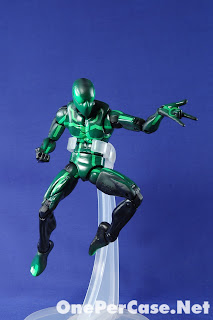 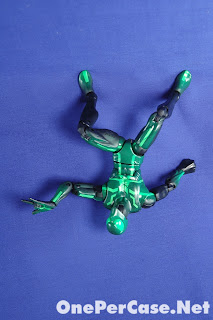 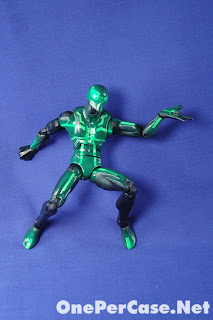 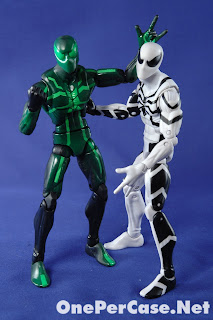 "Us spiders have to stick together.  Wait, what does a black widow does what after they mate?" 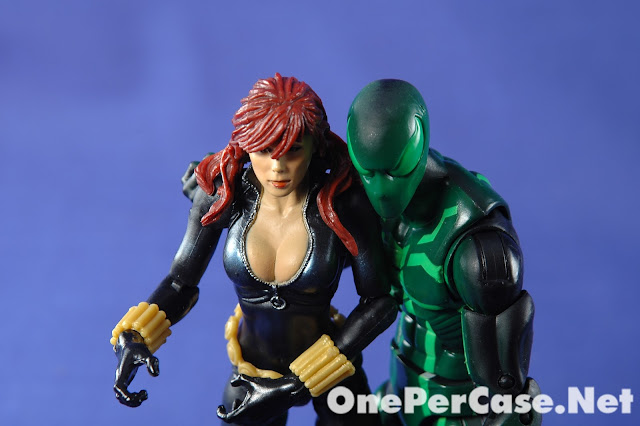