In addition to the standard Spidey and Lizard figures released to comic book stores, Disney Stores also got two exclusive editions of the web head - one being a metallic repaint of the standard figure, and another being this unmasked version. 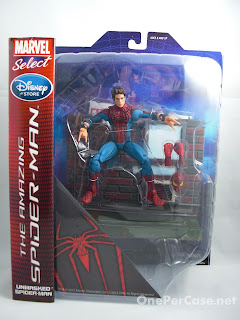 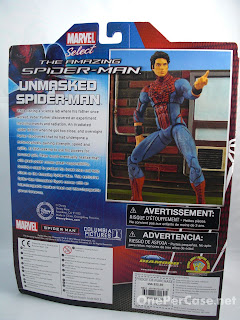 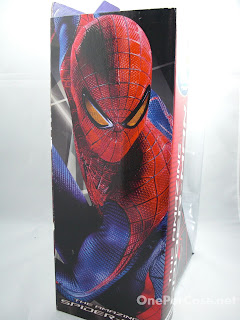 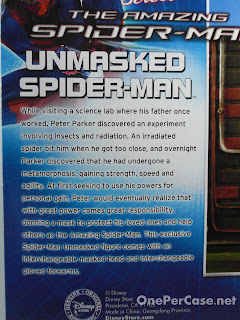 The packaging for this figure is like the rest of the Marvel Select line.  That is to say, it's a true collectors package.  On the front, we've got the over-sized bubble containing the figure and his dio piece, the Amazing Spider-Man movie logo, the Disney Store exclusive logo, and the Spider logo on the bubble insert.  The blue of the card back and the red behind the movie logo create a cool contrast resembling the textures of Spidey's new suit in the movie.  The spine that runs along side the bubble features character-specific art from the movie, and the back of the card features the bio, product photo, and all your typical copyrights and logos.  No cross-sell of other figures (like the Lizard), oddly enough.  Overall, very nice packaing that I almost feel guilty for tearing open.  But this figure's not going to pose himself in that over-sized bubble. 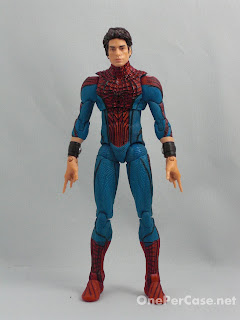 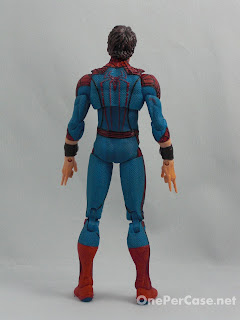 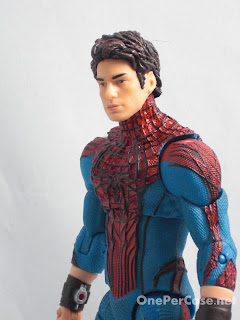 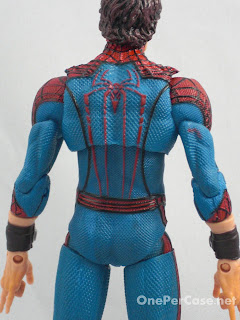 Speaking of which, this figure features an insane amount of articulation for a Diamond Select figure.  I would say it's on par with most Hasbro Marvel Legends figures.  The figure includes a ball jointed head and upper torso, ball hinged shoulders and hips, hinged elbows, wrists, and ankles, ankle rockers, double hinged knees, and swivels at the upper biceps, forearms, upper thigh, and calves.  The joints all move smoothly, and the new hip joints are especially nice.  They're designed to move forward without having to futz with the ball, and easily allow sideways movement without much hassle, either.  And did I mention he has rocker ankles? 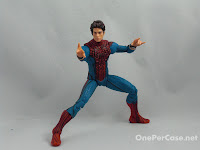 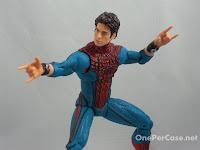 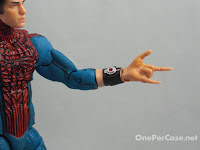 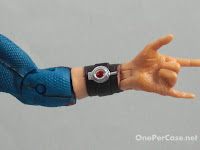 Despite all that articulation, the sculpt of the figure still looks great as well.  All of the parts of the costume are intricately detailed and textured, included the hip balls.  The web lines are actually sculpted on, not carved into the figure like some of Hasbro's versions.  Even the eyes on the masked head sculpt feature texturing like in the movie.  The Peter Parker head sculpt looks great too, but it doesn't quite resemble Andrew Garfield.  Actually, it looks to me like a slightly older, more grown-up Andrew.  But it is still unmistakably Peter Parker. 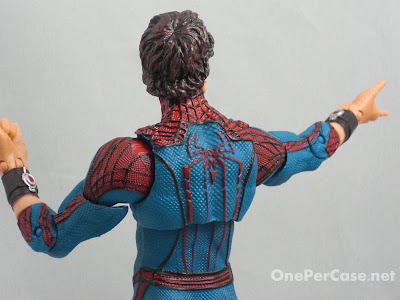 In fact, my only real complaint with the sculpt is the fact that this looks more like the Spider-Man we're likely to see in the sequel in a few years than the current movie.  The figure's shoulders are broader, and the overall silhouette and proportions are more heroic than Andrew Garfield appeared on screen.  That's not a dig on Andrew, I prefer the lean and lanky look for Spider-Man.  He was a 17 year old kid in this movie, and Garfield portrayed that perfectly.  This figure, though, looks more like Spider-Man after filling out and lifting weights.  Not a big deal, but it is one ding against screen-accuracy for the figure. 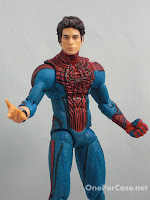 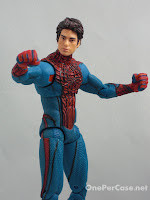 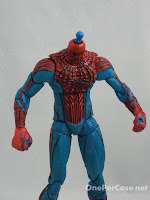 One other small ding against screen-accuracy, I think the blue paint on this figure is just a little too light.  Like the standard release, this unmasked Spidey features an almost baby blue look, where as the blue on the costume was much darker in the movie.  Again, not a big deal, but I noticed it.  Other than that, the paint job is pretty great.  There's a lot of intricate detail in the paint job thanks to the sculpted web lines, and Diamond Select has done a pretty good job of keeping the paint job crisp and neat.  There are just a few small areas where the paint gets a little sloppy, particularly in the neck area. 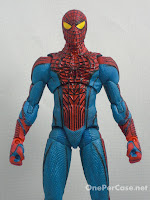 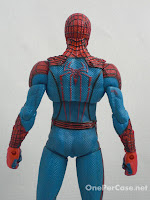 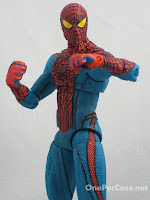 Where this figure really shines, in my opinion, is in the accessories department.  Have I mentioned before what a sucker I am for secret identity figures?  I love when a figure includes both masked and unmasked heads.  I think EVERY figure should do this.  What's even better with this figure, is he also includes un-gloved web-slinging thwippy hands, showing off Peter's web-shooters.  Every figure should include swapable hands, too.  Swapable heads and hands take a figure from good to amazing.  This figure includes Peter's unmasked head, a masked head, un-gloved thwippy hands, and gloved fisty punchy hands.  The only thing missing are the gloved thwippy hands that are included on the regular version of this figure.  So if you want those (I do), you have to buy the regular version, or the other Disney exclusive version.  I'm planning on picking up the other Disney version for his superior paint job.  Look for that review soon. 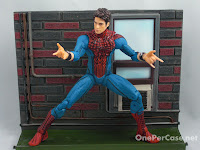 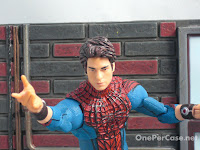 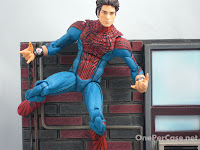 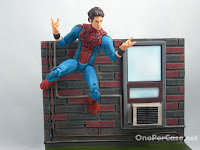 Then there's the big accessory in the box, the brick wall diorama piece.  I'm also a sucker for diorama pieces included with figures.  This piece features two foot pegs so you can stick Spidey to the wall for some cool wall-crawling action.  THIS is awesome.  If the unmasked head and swapable hands took this figure from good to amazing, this functional dio piece takes this figure from amazing to AMAZING.  Seriously.  Are you taking note, Hasbro?  THIS is how you make badass action figures.  You'd think more designers would realize the potential for awesomeness with giving Spidey a wall he can stick to, but this happens surprisingly little.  And I can't say enough how awesome this simple little thing is.  Foot pegs on a wall.  Genius. 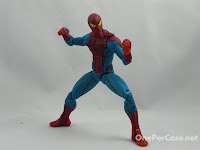 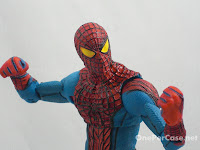 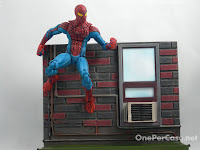 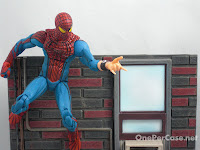 Scale-wise, this Spidey looks great next to other Marvel Selects, like Hulk.  Unfortunately, though, he's a little too big to pose with your Legends-scale figures.  So you'll still need to get the 6-inch Amazing Spidey if you want him to go with your other 6-inch figures.  Whenever Hasbro gets around to releasing him.  It's not like the movie came out a week ago and they're missing the chance to strike while the iron is hot, or anything.  But that's Hasbro for you.  Side note:  I really like that unlike most mass-release retail lines, Marvel Select figures all have set release dates when you can count on them to show up in comic book stores or other specialty stores.  It makes it much more convenient, knowing when and where to go hunting for them. 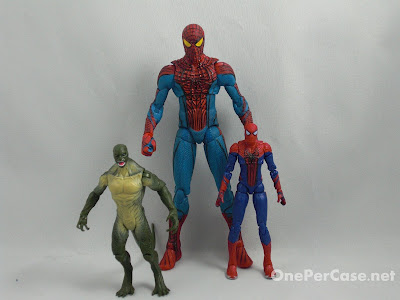 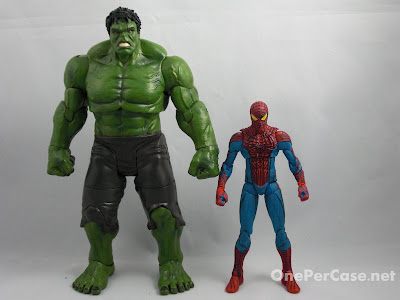 So there you go.  I'm not a Marvel Select collector, but if they keep putting stuff out that's this good, I will be.  This figure blows away any version of Spider-Man that Hasbro has put out in recent memory.  It's absolutely worth picking up, and is available in Disney Stores now. 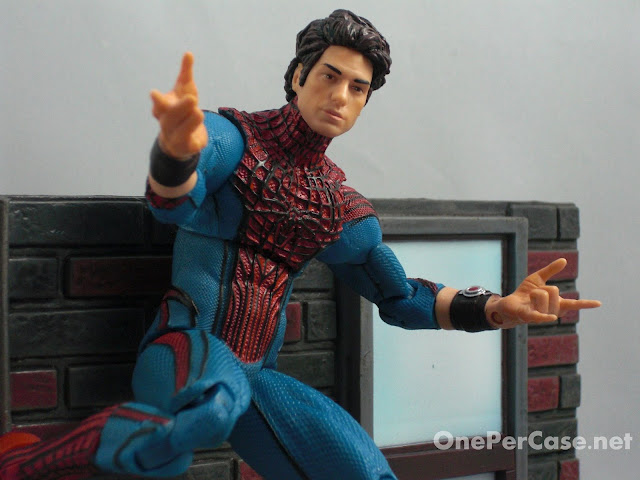