Last week we looked at the Marvel Select Amazing Spider-Man (unmasked) figure that beats the pants off of anything Hasbro has released for this movie to date.  Today we look at the almost equally awesome Lizard.  One more reason why DST is quickly becoming my new BFF after the break. 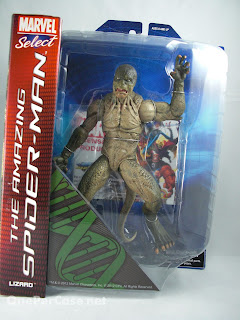 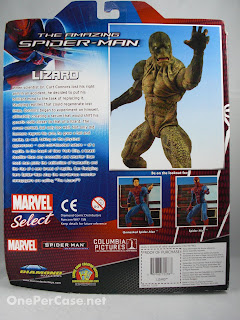 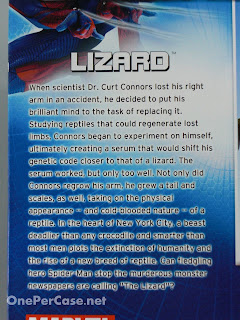 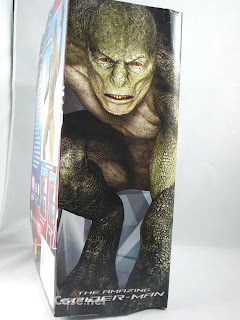 Packaging for the Lizard is similar to Spidey; large bubble, movie logo and character-specific art on the spine, over-all collector friendly packaging.  The bubble insert features a graphic of a DNA double-helix, instead of the spider logo, though.  After tearing open the packaging (I'm sure Matt cringes every time I type that sentence, he loves him some MOC Marvel Selects) and putting up a valiant battle against the army of twist-ties securing this monster inside his plastic prison, you are rewarded with your prize. 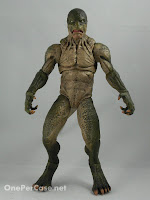 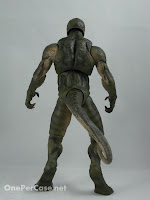 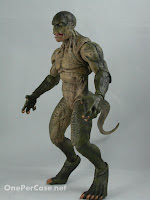 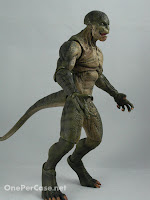 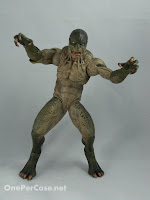 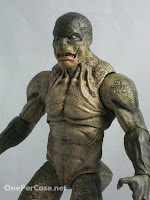 Also like Spidey, the Lizard's sculpt is incredibly impressive.  There is a ton of detail in the texture of the scales and skin, the veins and musculature, and the face.  You can see the complete love and devotion that the artist put into this piece.  The likeness to the on-screen character is remarkable, with the exception of one thing that bugs me:  his tail seems way too small.  Maybe I'm remembering wrong (I've still only seen the movie once), but I thought his tail was like, three times this size.  Strange. 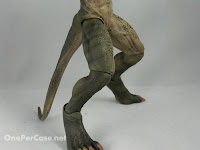 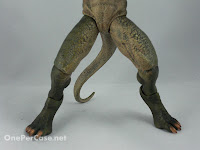 As it is, his tail is just barely long enough to be positioned as a "third leg" to balance him on.  I don't have the Hasbro 6" version of the Lizard, but I think even that figure has a larger tail than this 7"-scale version (this figure is actually closer to 10" tall, if not more). 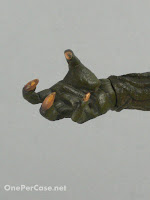 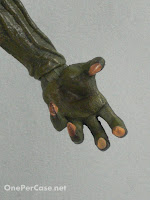 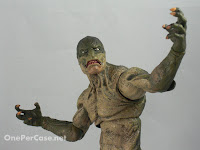 Note the hands.  Like in the movie, the Lizard has his normal 5 fingers on the left hand, but only 4 on the right (the re-grown arm), where the two middle fingers have fused into one claw.  I appreciate the little details like this that keep a figure screen accurate. 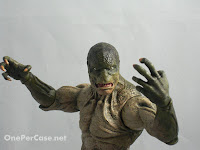 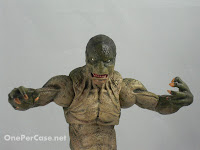 The paint is done well, too, with some great subtle shading and fading from green to tan throughout the body.  The claws are individually painted, the teeth and mouth are nicely detailed, and the eyes especially look great.  Home-run on the paintjob. 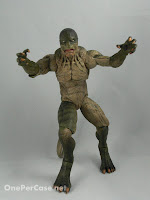 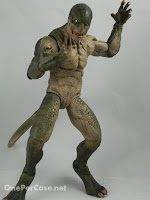 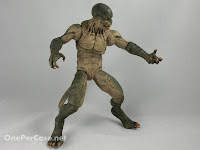 The articulation is my one point of contention with this figure.  Don't get me wrong, he's got a lot of articulation, and most of it is pretty great, but the hips make it difficult to get him into many running or action poses.  The hips feature a ball-hinge joint, but no thigh-cut swivel to complete the full range of motion.  Because of this, to move the figures legs forward, you have to rotate the whole thigh about 90 degrees, which puts the painted tan pattern on the inside of the leg, which look funky, and also puts the angle of the knee joint into a position where it doesn't do much good.  So certain poses look really bad.  Wide-stance poses look great though.  Aside from the funky hips, the figure features a ball jointed head and torso, and ball hinged shoulders, elbows, wrists, knees, tail, and ankles, plus ankle rockers (which aren't quite as useful as normal, given the Lizard's inhuman leg anatomy).  So overall, articulation isn't bad. 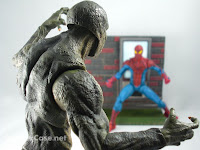 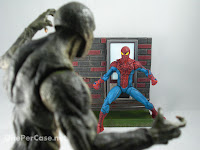 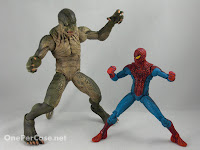 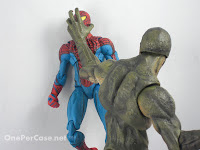 Unfortunately, this guy doesn't include any accessories or a base, but given his sheer size, I can't say I blame DST for not including anything.  This guy is a beast.  A tattered soft-goods lab coat would've been the icing on this figure, though. 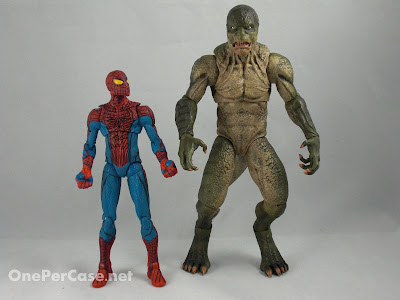 At the request of reader Dustin, here's a photo showing the Amazing Spider-Man Marvel Selects with a couple 6" Hasbro Avengers figures.  As you can see, Spidey towers over Iron Man, and the Lizard is way bigger than the Hulk, so in my opinion, no, these two lines don't look good mixed together. 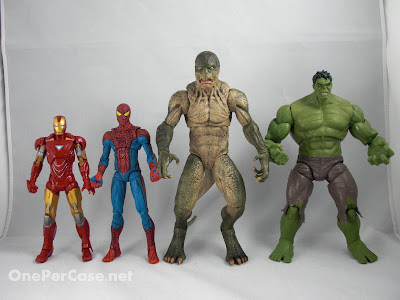 Over all, if you pick up the Spidey, this guy is a must-buy as well.  The sculpt and size alone make this guy well worth his price tag, the awesome paint and mostly good articulation are just a bonus.  Once again, DST nailed it with this release.  This figure is available in your local comic book store, and is currently in stock at Big Bad Toy Store. 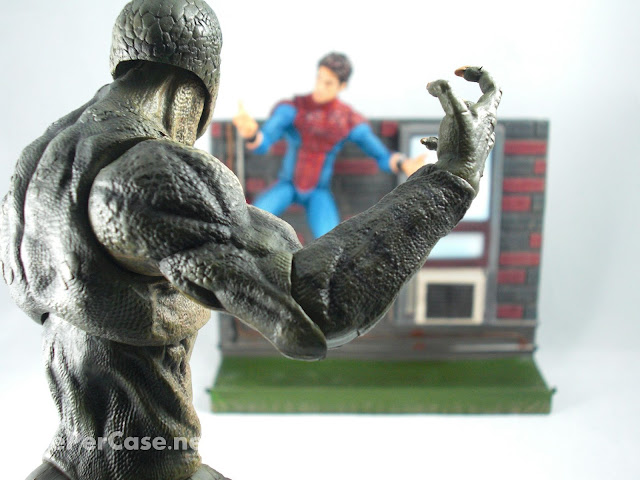