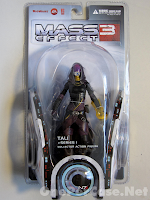 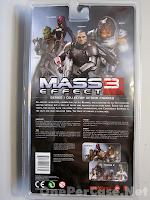 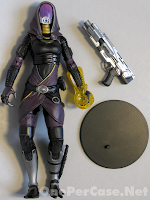 Once again, we’ve received our generic Series I packaging marked by a Tali sticker on the front of the clamshell. While overall I like the packaging, I’m not a huge fan of generic packaging. There’s a lot of grey area on the front of the cardback/insert that could have been used for some awesome individual character art. For me, it adds up to overall good packaging, but a missed opportunity for great packaging. 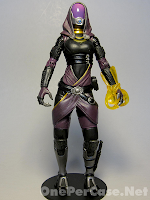 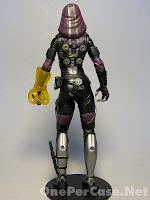 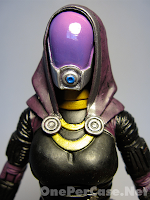 Given the character of Tali, we won’t be seeing a face sculpt. While removable helmets/facemasks are almost always cool, I’m glad Big Fish Toys didn’t attempt to take liberties with the character. What we get is a nicely done breather mask with Tali’s signature purple hood. The costume has some great sculpting with well-made buckles, belts, pouches and the like. All in all it’s a nice representation of the character. 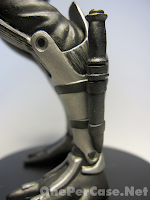 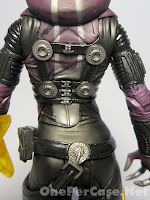 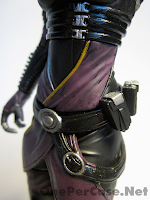 Tali comes with the customary stand, an M-27 Scimitar shotgun and a decent omni-tool. The shotgun has once again blown me away (pun intended) with great sculpting and nice paint. Very accurate to the game. The omni-tool looks good, but doesn’t seem to be removable. It has a slight appearance that it might be removable, but when I fiddled with it, I got the sinking feeling that if I removed it, it would never go back on. Unfortunate, as the shotgun should clearly be a two-handed weapon. The other disappointment is on Tali’s leg, in the form of a non-removable knife strapped to her boot. If Hasbro can handle removable knives on 3 ¾” Joes, it shouldn’t be a problem to do a removable boot knife in this scale. 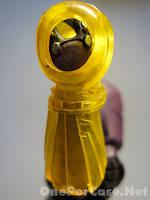 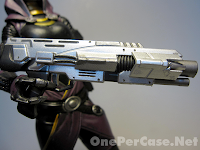 Big Fish has once again provided a decent number of points of articulation, but managed to do it in a rather limiting way. Tali’s sculpt doesn’t seem to indicate that the designers had any particular pose in mind. She ends up looking best in a sort of relaxed-neutral pose. I would like Tali to pull of some semi-bad-ass looking by wielding that two-handed shotgun, but the limited articulation and omni-tool make that a bit difficult. The neutral pose doesn’t look bad, it’s just no overly exciting. 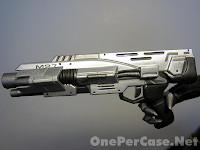 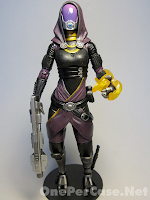 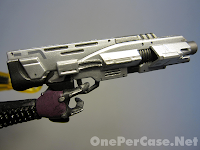 All in all, just like the rest of the Series I figures, Tali is at the same time a great figure and really sub-par. It’s a nice looking piece of plastic with a lot of missed opportunities to be great. But in the end, Tali is Tali, and your Mass Effect crew just won’t be complete without her. 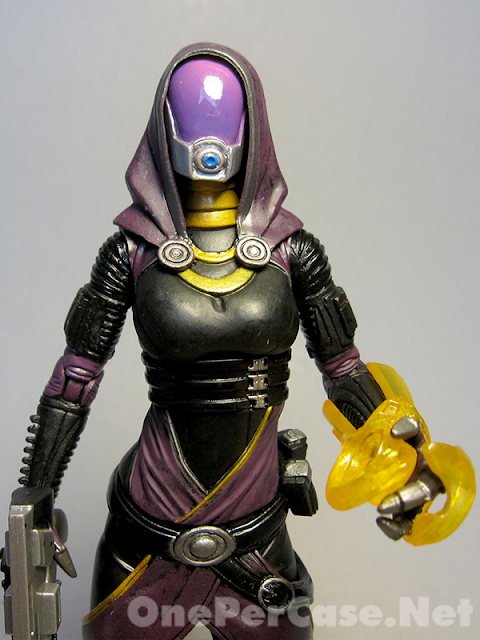