Every good action figure line should have a good mixture of male and female characters. Big Fish Toys is giving us one female a wave in the Mass Effect line, which considering there are only four figures per wave, is well above standard. Most toy companies are still stuck in the “female figures don’t sell” mentality, so we don’t see a whole lot. Then again, this line is clearly geared towards collectors, not kids. Now it’s time to take a look at Cerberus officer Miranda Lawson. 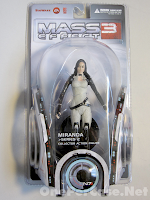 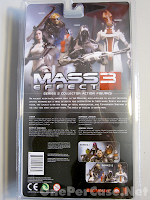 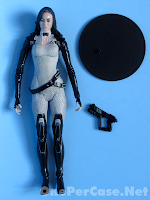 It’s a bit of a waste to get too into the packaging any further. It’s basic and only changes slightly between waves. Other than a small sticker, there’s no difference between the figures, and there’s a big gray area that would have been fantastic for some character art. 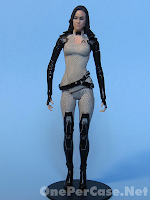 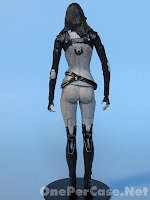 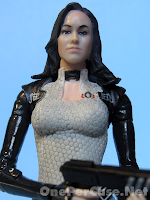 When you look at the sculpt, we again have a figure that is a good representation of the character, but fails to have that “blow you away” aspect. The face looks like Miranda, but just lacks much detail, making it looks like a mannequin Miranda. The mold on the hair is a stiff plastic and molded to make it look like it’s sitting on her shoulders, so turning the head makes things look weird. The patterning on the uniform is actually fairly well done, and the belt looks great. The boots aren’t too fancy, but more-or-less get the job done. My main complaint on the sculpt is that Miranda’s arms look too thin. Yes, she is very slender in the game, but she kicks ass, and as such, the arms could really use a bit of definition. 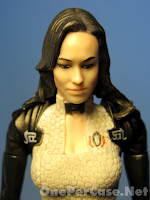 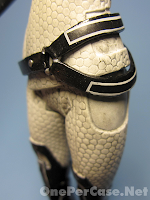 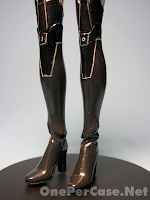 Big Fish Toys continues to give us a single accessory with the figure. Being that these characters have two weapon proficiencies, it would be nice if we got two weapons. Miranda comes packing the M-4 Shuriken machine pistol. The sculpt is good, but the coloring is a bit off, and could have benefitted from a little more paint. Again, if I only get one accessory, it needs to be a damn good accessory. 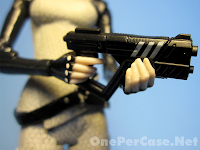 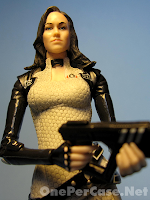 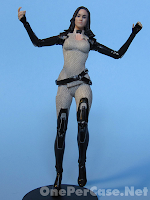 Miranda’s got a bit of movement too her. Unfortunately, that’s it, just a bit. Since she’s limited to just hips and knees, you’re not going to get much movement in the legs. The arms are surprisingly immobile, given that she has no armor to get in the way. She can hold her M-4 Shuriken in both hands, which is a plus, but outside of that the best you can really get is some lame David-Blaine-wanna-be levitation pose. I was hoping to get some poses more befitting of a Cerberus agent, but it just wasn’t happening. 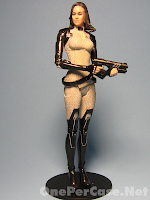 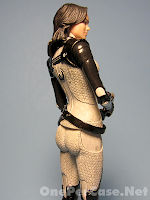 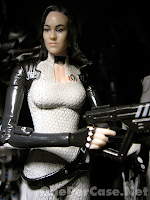 Other than a somewhat flat face sculpt, I am more or less willing to give this figure a passing grade. Miranda, you’re not an A+ plus student by any means, but we’ll give Big Fish Toys a solid B- on this effort. You can get a good enough pose or two out of her to make her look nice mixed in with the rest of your Normandy crew. 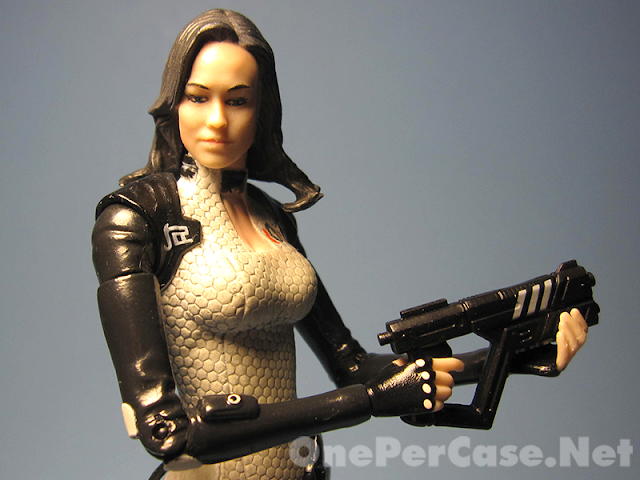