Just a couple more to go. Legion, the Geth infiltrator, joins the crew in Mass Effect 2, and joins the second series of Big Fish Toys’ action figures. In the game, Legion comes across as a bit of a mash-up of wires, hoses and a few random parts. Overall, it’s a somewhat intricate design. How well does Big Fish Toys capture that likeness? Read the review to find out! 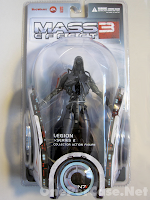 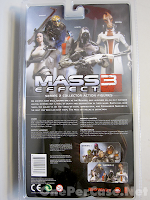 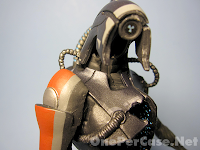 Yet again, we get a figure that comes in a basic clamshell package, with only a sticker on the front to distinguish it in any way from the rest of the series. The only thing that makes Legion different is… could it be?.. a second accessory? Hmm… 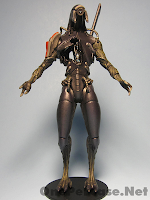 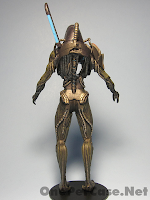 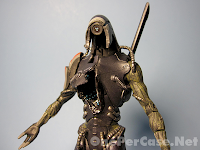 Given that Geth have a rather unique design, getting a sculpt that is at all close will do the job of making the figure look like Legion. The head is basically a “face” that is a shrouded eye and a neck full of wires and hoses. My initial thought on this sculpt was that it was severely lacking in detail. Then when I go back and look at images of the character, I see that he actually doesn’t have as much detail to him as I remembered. The N-7 shoulder armor looks nice, there’s a gaping hole in the torso where there ought to be, and over all, the sculpt is good. 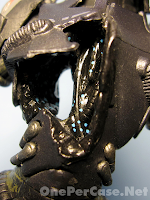 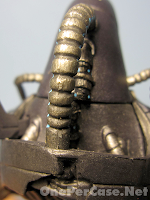 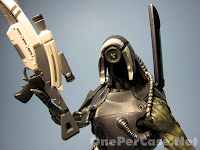 This time, our sole accessory is the M-92 Mantis sniper rifle. While the sculpt is nice, the paint job falls a little short. What is there is accurate, but it’s missing the stripes, weapon number and other markings that would have made this a great looking weapon. That second accessory? It’s Legion’s snap-on antenna. As such, I don’t particularly count it as an accessory. If you get it in position just right, it stays fairly well, but it’s a bit of a chore to get it to fit. More difficult than it should be. 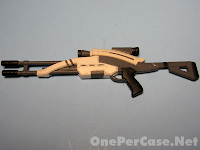 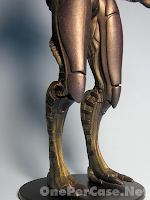 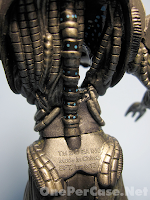 Opening up Legion, the first thing that stands out is Legion’s arms. Literally. They just don’t want to get down by his side. Another figure from Big Fish Toys that suffers from sub-par articulation. Again, with a six-inch scale, I just don’t see the reason for this failure. Being a line clearly aimed at collectors, I just don’t see cost as being an issue. I would have gladly paid an extra dollar or two for a figure that moves well, and I think the majority of collectors feel the same. When you have a figure that comes with a sniper rifle, he really needs to be able to hold it comfortably in two hands. Legion can’t do that with the M-92 Mantis, and that’s a big deal to me. The legs move ok, and again, due to the design, may potentially lead to difficulty standing if they were over-articulated. I’m willing to give the bottom half a pass on these grounds, even if it means I can’t have my breakdancing Legion. The upper torso articulation really falls short, so no poppin’ and lockin’ for this Legion. 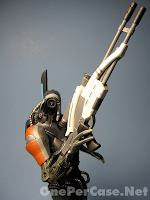 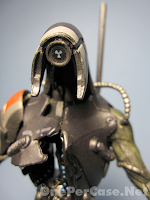 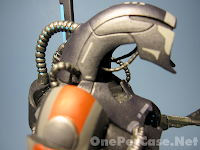 Yes, my summary on these figures has been essentially the same all along. I view that as a testament to the fact that Big Fish Toys delivered consistently on these toys. Unfortunately, it’s consistently bad in just as many ways as it is good. Bottom line is that your Mass Effect crew won’t feel complete without Legion, and it’s highly doubtful we’ll ever get any other shot at Legion. 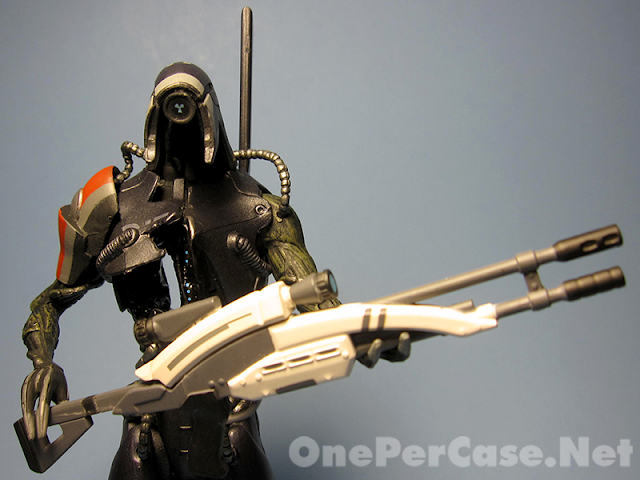