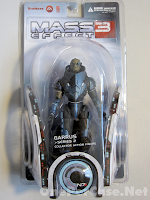 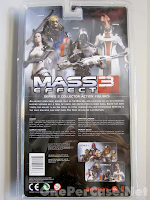 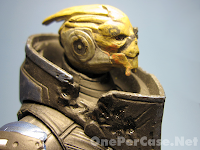 This will be the last time that I complain about the large space on the card that could have been filled with some great Garrus Vakarian art. I don’t fault Big Fish Toys for the overall cookie cutter packaging, but having just that one piece of art that uniquely identifies the figure goes a long way. It’s a collectible line, and unique artwork would have made the packaging far more collectible. 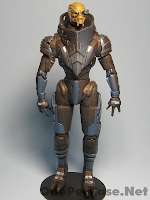 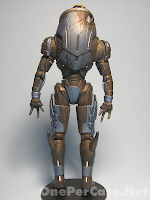 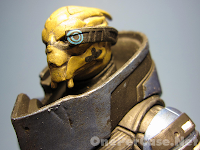 Turians have a unique look that looks like a blending of bird and reptile. When you’re a soldier like Garrus, you need a nice suit of armor to help save your skin. The head sculpt is an accurate reflection of the character, but I would have liked to see a little more of the scarring on his face. The eyepiece is a little lacking. I would have loved to see something less loose and more transparent. The armor looks good, and the damage looks great. Overall, a well-made set of armor befitting of someone that has a seen a lot of action. 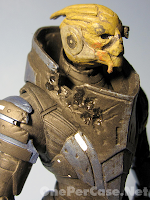 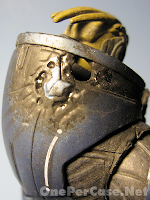 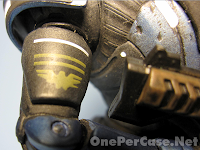 Garrus comes packed with an M-98 Widow sniper rifle. Unfortunately, the only way to tell is the design. Big Fish Toys has again delivered a well sculpted weapon that falls short on the paint. In addition to the lack of detailed paint apps, the color is wrong. The M-98 should be more of a dark grey mixed with tan/off-white. Instead, it’s a sort of metallic looking brown. Great sculpt plus poor paint equals good accessory that’s another missed opportunity. 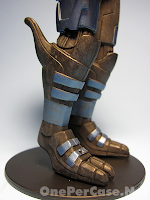 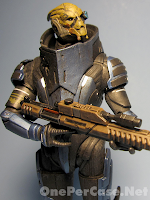 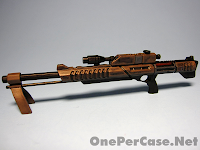 Now the surprise. For a guy in a full suit of armor, Garrus Vakarian is surprisingly flexible. He's got a sniper rifle that he can hold comfortably in both hands. Who would have thought? Oddly enough, he’s the one figure you can get in a nice surrendering pose. Garrus wouldn’t go so easily, so he must be reaching for that assault rifle behind his back. Garrus, prepare to be disappointed in a major way. Big Fish Toys doesn’t believe in a secondary weapon. Lack of accessories aside, the arms move at the shoulder, elbows and wrist, and have the most movement of any figure in this line. The ball jointed head poses as it should. The legs are again only articulated at the hips and knees, but help him stand well and are thankfully posed naturally. Not amazing articulation, but the best of the line. 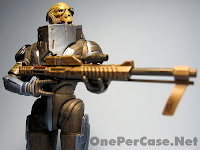 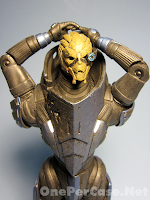 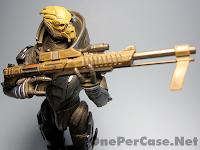 Unlike most of the Mass Effect figures, if you like the character enough, Garrus is worth picking up on his own. Your crew will feel empty without him, but he’s solid enough to warrant a separate purchase. Mr. Vakarian is easily the best figure in the second series. 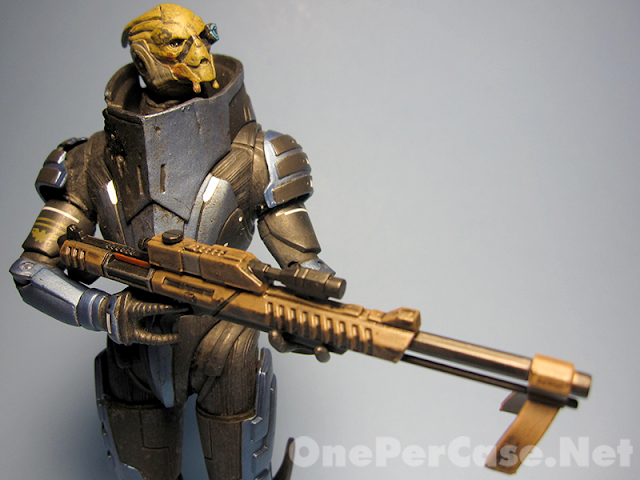