I’m a Playstation 3 owner, so I was never privy to the original Mass Effect. A long-time friend of mine got me Mass Effect 2 for a birthday gift, and I was hooked. When I heard there were Mass Effect figures on the way, I was stoked. After some futzing by DC Direct, a save by Big Fish Toys, and a long pre-order period, the Mass Effect action figures are finally out. So how do the toys from this relatively unknown company stack up? Read the review to find out! 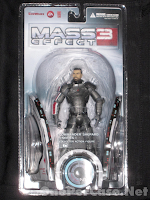 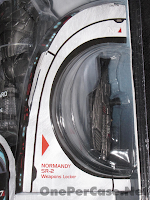 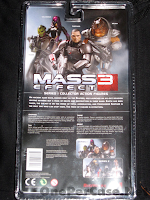 This is the first time I’ve heard of Big Fish Toys. If they hadn’t made toys from one of my favorite (recent) video game franchises, it’s likely I still would have no idea who Big Fish Toys is. Their first chance to impress me came with the packaging. Not amazing, but good. The bulky clamshell was big, but not too excessive. The front is fairly plain, but has a nice bold logo and a structure which more or less fits with the Mass Effect theme. The side features the Normandy SR-2 Weapons Locker, a little highlight bubble for the weapon. The back is generic to all Series I figures, with the customary group photo of the wave, along with a preview pic of Series II and short bios of all the figures. More or less, it’s what you expect on a good action figure package. 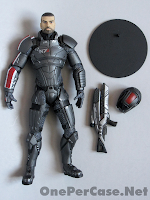 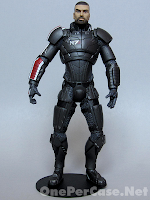 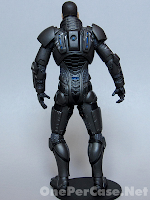 For the most part, I was impressed with the looks of our dear Commander Shepherd. The sculpt looks great. The armor looks true to the game, and the face sculpt reflects the standard generic Shepherd that gets featured on most of the game packaging and marketing collateral. The paint on the figure is nice, other than some troubles with the application. The main issue on my Shepherd figure was the stubble/beard. The five o’clock shadow is fine, but the goatee/beard part is rather off-center, which looks a little awkward. He has a universe to save, I suppose there isn’t always time for good grooming. 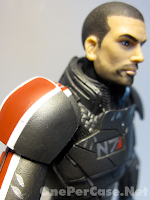 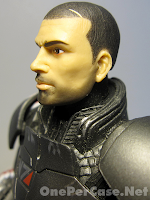 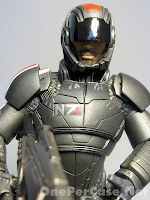 The accessories were one of the highlights of the figure. The helmet looks good (although I suppose a dark-clear visor would have been nice) and fits snuggly on Shepherd’s head. The M8 Avenger assault rifle looks fantastic. Great sculpt, great paint job, just all around fantastic. Commander Shepherd also comes with a stand, which is a big help, as Shepherd has a little trouble standing sturdily on his own. Oddly, this stand has a DC trademark on the bottom, which I assume to be a leftover from when DC Direct was still in charge of the Mass Effect action figure line. My one major complaint about the accessories is the lack of an omni-tool. It really is one of Shepherd's signature accessories, so an omni-tool/omni-blade would have been really nice. 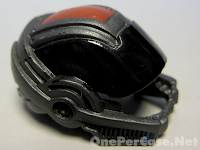 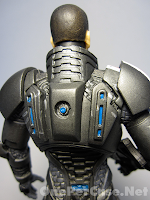 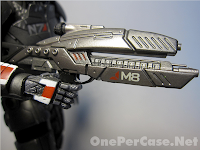 Lastly, we come to the articulation. I suppose the best thing I can think to say is that it’s reminiscent of a lot of McFarlane figures. The points are there, but the overall movement just isn’t. The upper arms movement gets blocked by the armor. The hips rotate, but the upper legs are molded in such a way that makes it hard to get Shepherd to stand up straight. As a result, you end up with an unnatural bow-legged stance. While the M8 Avenger looks great, it doesn’t sit well in his hand, and it’s more or less impossible for Shepherd to hold it two-handed, which was a letdown. 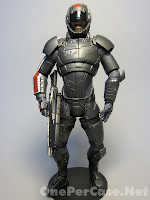 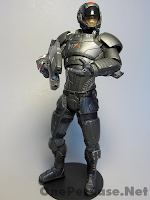 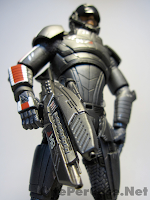 I had read some fairly unfavorable comments about the Mass Effect figures, so I was a little worried at what I would get. Perhaps part of it was my low expectations, but I was more or less happy with what Big Fish Toys did with Commander Shepherd. The articulation is a bit lacking, but he’s going to be standing on a shelf, so as long as I can give him one fairly good pose, my needs are met. I’ve seen these anywhere from $17-$25. If you’re interested, big box won’t help you. You’ll need to track these down online or from your friendly local comic shop. 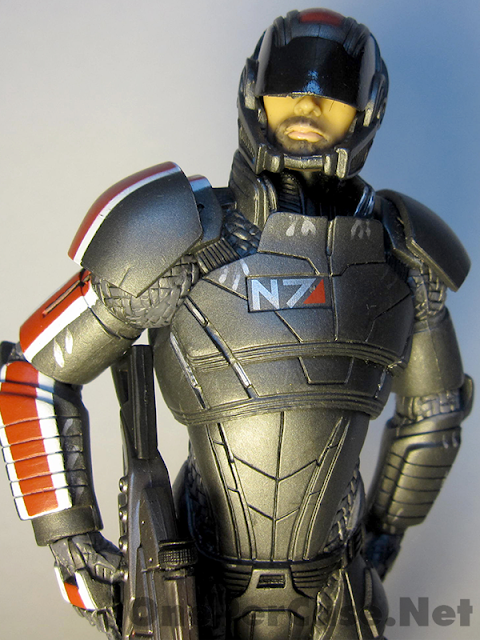