As of late, a lot of the art that I have posted hasn't really been just a doodle, but more of near finished or finished art. Well, finished for me. Today's piece really is more akin to a doodle. And since it's not that great a piece or very large in scale... I figured I'd throw in some info regarding one of my most favorite of characters!


I'm a huge Optimus Prime fan. Seriously, I love me some Optimus. He is the epitome of what a hero is. He's awe inspiring. He's wise. He's humble. He's fair. He's powerful. But, Optimus wasn't always the hero we know him to be, he had to grow into his position as the greatest, and last, of the Primes.

Within the last few years Hasbro has set an army loose. That army's mission is to pretty much reconcile all of the Transformer's history into, for the most part, one continuity. There was the beloved G1. There was G2. There was the Unicron Trilogy containing the Armada, Energon and Cybertron stories. There was RiD. There was Beast Wars and Beast Machines. There was Animated. There were the Bay-formers. And as of current, Prime. For some, they have adopted the 'Alternate Reality' or 'Multi-verse' device that has become a great way to tell stories without impacting the main continuity.

Most Transfans have their favorites. Most again have the ones they loathe. The arguments can get pretty heated.

In one of the most recent iteration of the canon on the Transformers past, Orion Pax was just an archivist. Fated to forever listen to, code, and research data that passed all through Cybertron.

In the novella " Transformers: Exodus" we find that Orion wasn't satisfied with just listening, he started to question. Why? Why are we in this state? What lead us to this point? And more dangerously, what can we do to change it? Another Transformer started asking these same questions, a Transformer who'd taken a long last, and dangerous name, the gladiator Megatronus. 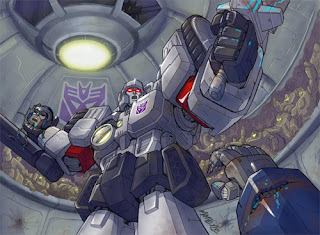 As the stories of the gladiator from Kaon grew, Orion found a kindred spirit. He secretly listened to Megatronus' speeches that were asking the same questions. As time passed the crowd shortened the gladiator's name to Megatron. Megatron and Orion met several times and soon became friends of a sort; brothers of an ideal. Orion and Megatron would spend hours discussing how they could possibly change the fate of their race; which they feel had become stagnant rotting away thanks to the caste system that had been put in place quite a few millennia ago.

While Orion posed questions and change through talk, Megatron took more drastic routes. Often using violence to make the upper castes look at what they would rather ignore. Finally, Megatron was called to the great council chambers of Iacon to discuss his proposed changes. 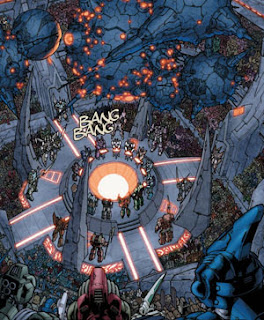 The talks did not go well. After a sharing of ideas and middle-grounds, it was Orion that would be given over leadership of their race, the mantle of Prime. Megatron was enraged and felt that Orion had betrayed him. After a show of force, Megatron was branded an outlaw and a malcontent, the Decepticons were soon born and so began the war. 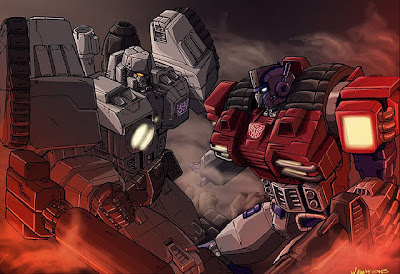 There are many tales that take place during the War for Cybertron. Hasbro, calling in the aide of High Moon studios, created a game that focuses specifically on this chapter of Transformers history. The fall of Sentinel Prime, the ruthlessness of Megatron, and the rise of Optimus are all there for the showing. It is one of my favorite games.

In the game, following along Hasbro's new retconned history (and now seen in the comic Transformers: Autocracy) we see Orion make his way to the center of Cybertron, as if he is being guided there by a greater power. That greater power is none other than the Cybertronians creator himself, Primus. Primus informs Orion that he has what it takes to be a great leader and an icon for his people. Primus bequeaths part of his essence and power to Orion in the form of the Matrix of Leadership... and Optimus Prime is TRULY born. 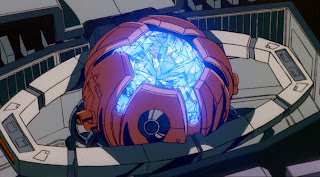 Over the years Optimus Prime has been the quintessential hero archetype. Chosen to be a leader and granted the last of a vast power was something that he never truly wanted. Over the millennia and through the untold years of war, Optimus Prime learned and grew. He takes every life seriously, good or bad. Any loss of life weighs on him and he would rather talk his way out of a battle as compared to fighting it. But of course, that is not always an option; and if Optimus Prime has to fight, few Cybertronians are a match for his power and prowess. Even the mighty Devastator has fallen to Optimus Prime. 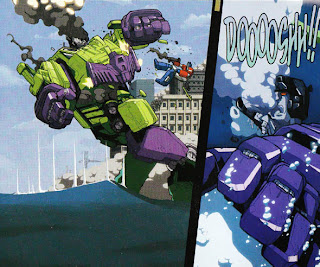 But it is still Optimus Prime's 'heart' that guides him. He does not flaunt his power. He truly understands that with that well... to pull from another source... with great power comes great responsibility. Optimus Prime would never ask another Autobot to do something he wouldn't. He would sacrifice himself, and has, to save a life; whether that be another Autobot, human, or any other life form... even a Decepticon.

Right around the corner, the sequel to the game War for Cybertron,  is coming out; "Transformers - Fall of Cybertron". Following shortly after the end of "War", "Fall" will see Optimus Prime leading the Autobots on their exodus from their dying home planet of Cybertron. Once again, we will be able to fill Optimus Prime's shoes and battle Megatron and his Decepticons in a brand new story arc. Once again bringing voice to Optimus Prime is none other than Peter Cullen himself. Recently Peter Cullen was interviewed while in the midst of doing his ADR work for the game. Cullen talks about what makes Optimus Prime a hero... you can view the video her... "The Heart of a Hero". 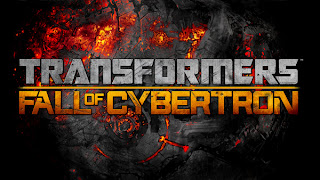 Optimus Prime stands as one of my favorite heroes... probably my most favorite. I've had a lot of good memories, enjoying the tales of Optimus Prime along with my father, whether they be cartoon or movie, drawn or read. I even had the great pleasure of meeting Peter Cullen himself, who certainly takes to heart everything that people say about Optimus Prime. Even the stories of how Cullen himself has influenced them with just his voice. He really is a great man to just talk to. My father loves Optimus Prime too... so much so, that when he died in the '87 movie, he wanted to leave the theater. I convinced him to stay... well most of it was whining. I told Peter Cullen this when I met him, saying "When YOU died..." and with a humble look and a handshake, he told me to tell my dad that Optimus Prime says "Hi".

Unfortunately for me... even with my aptitude for drawing, I never mastered all the details for drawing robots. I'm sure if I practiced a hell of a lot more, I could rival... 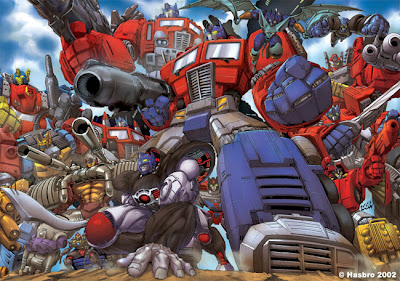 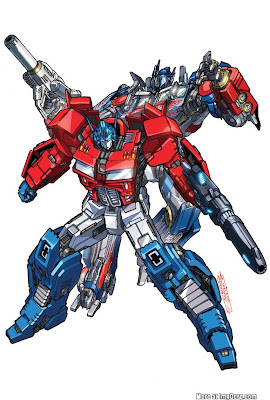 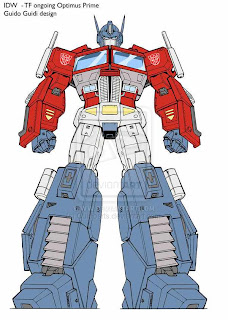 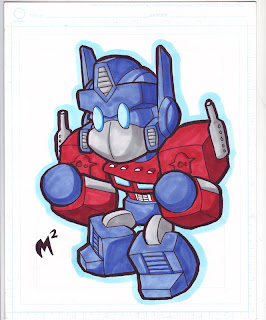 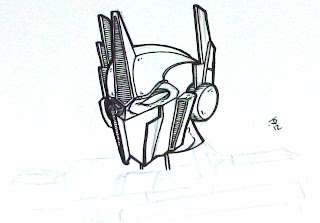 Well... now that I've depressed myself on my own art, I'll stop blathering about Optimus Prime. My eventual goal is to get a photo-log of all the Optimus Primes I have in my collection. That Don Figueroa poster I posted up above... I have all of the Prime's shown in it, and that's just scratching the surface of my Optimus Prime collection.

One day, I'll get my Optimus Prime's cataloged... one day.