After making the Power Puff Avengers, I wondered what else I could come up with that was a mash-up of styles. So... back to the Avengers doodling... but from what or whom's style should I borrow?

As I grew up, one of the smartest comics going was by a man named Bill Watterson. You know the name... you know the comic... say it with me... CALVIN AND HOBBES. Calvin and Hobbes was an amazingly deep comic about 6 year old Calvin and his best, 'imaginary' friend, a tiger named Hobbes. Every day Calvin and Hobbes would go on adventures, deal with parents, or deal with Calvin's worst nemesis... the icky... Susie Derkins.


When I was younger, I looked forward to reading the flights of fancy, misadventures, the escapism, and the Calvin-Ball games that were running daily in the papers. Not to mention the 6 or more panel color runs on Sundays! It was such a good comic. Watterson was a genius. Calvin and Hobbes had adventures that ranged from outside play time, disturbed snowman building, the deep-space tales of Spaceman Spiff, the heroic sagas of Stupendous Man, the ever evolving Calvin Ball, the Transmogrifier, and Calvin's ever changing form into whatever he felt like... the T-Rex was one of my favorites.

I was truly sad when Watterson announced that Calvin and Hobbes would be ending. I had bought most of the books that had been put out... Scientific Progress Goes Boink!... Lazy Sunday Book... The Essential... so even though it was ending, I could still read the strips over and over.

Sadly, the only reminder we have of Calvin and Hobbes on a regular basis these days is... 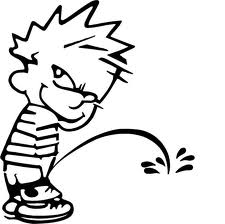 Be sure to place whatever it is you hate under the stream to show how much you hate it.

If Watteson were dead, this would surely be the thing that has him rolling in his grave.

So... pushing that atrocity out of my head as I was doodling, I asked myself what would be another clever mash-up for the Avengers... and came up with an idea for Cap and Hulk that mirrored one of the most classic Calvin and Hobbes images. So... for Avengers fans, Calvin and Hobbes fans, and my own personal "I miss you Bill Watterson"... I present... 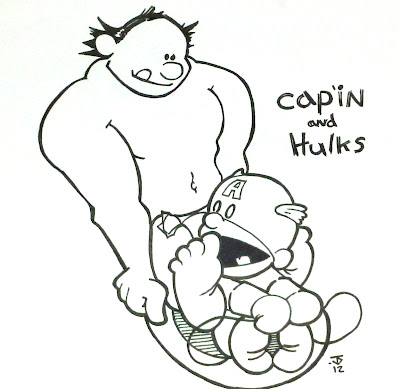 Mash-up doodles and ideas by Scion of Primus