Wow.  That's all I have to say about this 4-foot piece of badassery and awesomeness.  We've seen some really awesome SDCC Marvel Exclusives announced in the last week, but nothing could have prepared us for this OVER 4-FOOT LONG Super Helicarrier, complete with Maria Hill and Captain America figures.  Full details (or at least as much as we know at this point) after the jump.

Hero Complex broke the news today of this beast.  It is apparently a full foot LONGER than the version coming out at retail this summer, AND as if that weren't enough, instead of that crappy under-articulated Cap that comes in the retail version, we're getting a nicer Cap and Maria Hill here.

Maria Hill appears to be a repaint of the Avengers Black Widow figure with a new head.  The paint job is obviously comic inspired, but the head appears to be Cobie Smulders-ish.  Either way, I'm stoked to be getting a Maria Hill figure.  Cap looks like a repack from the "First Avenger" movie line.

Price for this bad boy is said to be $129.99.  I wouldn't expect these to stick around throughout the end of the Con, but we may also see a few go up on HasbroToyShop the Monday after the show (but good luck dealing with that nightmare).  If you're not heading to SDCC yourself this year, you better make friends with someone who is. 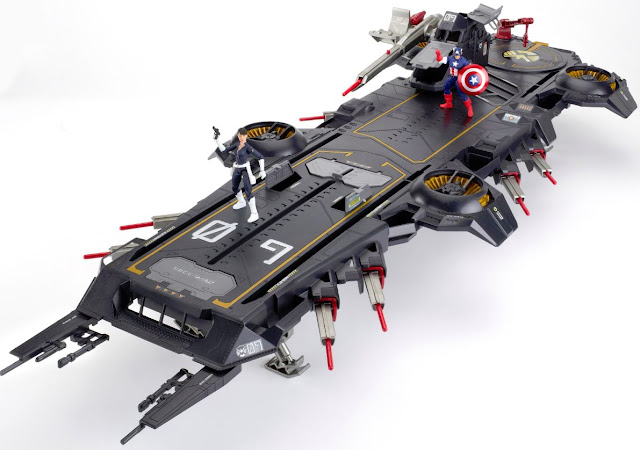 Update:  Here's the package artwork by Joe Quesada.  Could this perhaps be hinting at some more future villain characters in the Marvel Universe line?