I'm a gamer. I game. Not just video games, but paper. My name is Joe, and I play Dungeons and Dragons. And Shadowrun. And Pathfinder. And Unhallowed Metropolis. And Marvel Superheroes. And Mutants and Masterminds. And Champions. And Rolemaster.

Yes, I play role playing games. It's fun. It's imaginative. It's a great time with friends.

Years ago, a friend of Jason and I, John, ran a West End Games Star Wars campaign. It was a blast. Jason and I both played Jedi... I mean come on, who wouldn't? We had a good time and eventually the game faded away. Recently, John decided to start our game back up again. He wanted to go with a Serenity type of slant... a group of misfits doing odd jobs to pay the bills all the while our pasts were catching back up to us. And it's been great fun.

But what the heck is a Hambee Pampaloo? I'm getting there.

Jason's role in the game is as our resident bounty hunter, Birch Tosser. Birch is all Boba Fett'd out and hunting men, women, aliens, and things down to make his way. Basically, Jason/Birch is our Jane Cobb.

As for what a Hambee Pampaloo is, that's me. I'm an Ewok.

Jason should be making short jokes in the comments soon.

I wanted to try something a little different. Every group needs a Serenity and every Serenity needs a Mal. That's where I come in. But there are so many Captains out there all usually the Jack Sparrow or Mal type. I went down a different path and decided to choose a race that one wouldn't normally associate with being a Captain of a smuggling vessel. An Ewok Smuggler certainly fits the bill. It's hilarious. But instead of Mal, I patterned him after Jeff Bridges' turn as Rooster Cogburn in True Grit. He's a gruff, mean little 'Wok with an eye patch and smokin' a stogie.

Another fun bit our 'Serenity'... known as the 'Princess Kneesa'... has been retrofitted to have everything scaled down to 'Wok size. All the labels and panels are in Ewokese and all the crawl spaces have been shrunken down to only accommodate me. It makes it harder for the Jubal Early's of the galaxy to steal my ship.

When the game started, I scribbled out a pic of Hambee. He's got pouches and mechanic's gear, a WWII-ish leather flight helmet and he's covered in engine grease.

My first idea sketch of Hambee was during a meeting at work on a note pad...

My next sketch of Hambee was a little more detailed and never got inked... just all scribbled pencil work. 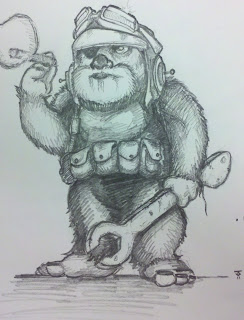 My latest sketch wound up being all Power Puff at my buddy's request. He loved the Avengers shot and asked for a shot of our Star Wars riff-raff in that style... Hambee is all I have done so far. 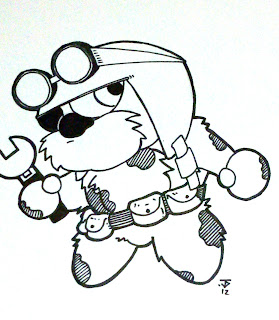 I'll eventually take a shot at doodling out the rest of the group. I just need the deets from the other players.