While trolling the internets yesterday, I came across this, what appears to be our first official Hasbro photo of the upcoming Nick Fury figure, believed to be included in Wave 4 of The Avengers line (with the Chitauri).   Full photo after the jump.


The photo is pretty low-res, and judging by the Asian language text at the top, was clearly not intended for the US market.  We last saw this figure appear in the Toys R Us Times Square display.  This does indeed appear to be the same figure.  The body appears to be a repainted Winter Soldier from the Captain America line, with a new head, arms and jacket.  Not very accurate to Sam Jackson's costume in The Avengers, but I gotta say, it doesn't look bad.  And that Winter Soldier buck at least includes more articulation than most of this line.  I had hoped that the figure would also include the Tesseract with brief case, but that doesn't appear to be included. 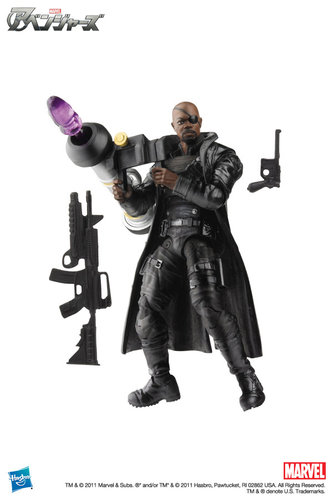 It's unknown at this time when this figure will be released, but we should be seeing it when the Wave 4 pre-orders eventually go up at the online retailers.
Posted by Zak Sousa at 7:36 AM