If you’re a toy collector, chances are you know the frustrations of empty retail aisles. Particularly at the “big three”, distribution can be spotty, and your most common “recent acquisition” is frustration and an empty gas tank. Particularly with Hasbro lines like the Star Wars Vintage Collection, some figures can be a pain to track down if you don’t want to pay eBay prices. The problem seems to be two-fold. Distribution (the stores don’t get figure) and case packs (and when they do, they get one each of the “hot” figures). But what do you think a good solution would be? Time for the obligatory rant. 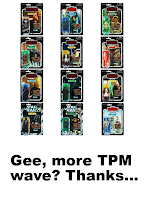 Start with distribution. Honestly, I don’t have any magic bullet answers. On Hasbro’s end, don’t make your figures look the same. This was particularly a problem when Star Wars had a very similar look to their basic line, greatest hits and Clone Wars. To the average retail worker, they all look the same, and therefore get mixed up on the pegs. The problem is, if the pegs look full, nothing gets reordered. When the pegs are all full of greatest hits, we get no new basic figures or Clone Wars. Currently, the Clone Wars and Movie Heroes lines look similar, but at least the Vintage Collection has a distinct look. Going over to the Avengers line, apparently Target has now integrated the Iron Man 2, Thor and Captain America lines into the Avengers SKU. This means we won’t be seeing new Avengers figures at most Targets for quite some time. Bad move, Target. 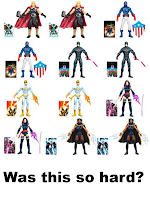 When it comes to case packs, to me, the problem is a little easier to address. Hasbro has become a big fan of revision cases. So here’s my answer. To start off, balance out waves. Instead of having waves of anywhere from 3-9 figures, make each wave contain 6 figures. The original assortment simply packs each figure at two per case. Revision assortments can be used to handle extras of troop builders and other figures with a higher demand. Having a solid pack of two per case handles two types of collectors, people who want a carded figure and opener of each, and people who want one of each and can split the case with a fellow collector. From what I’ve seen, this takes care of a significant chunk of the collecting population. Yes, this means people may still need to purchase cases online, but it seems that online cases are becoming more and more of an inevitability. Even Hasbro Toy Shop rarely sells single figures any more. Given that, online cases are a much easier pill to swallow when you don’t end up with a bunch of unwanted leftovers. 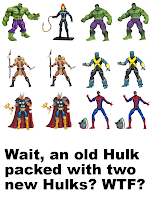 As collectors, we all know this is an issue, and it feels like it has been for a long time. As someone who is fortunate enough to be able to go hunting fairly often and someone with a good network of local collectors, sooner or later I'm able to get a hold of just about any figure I'm looking for. I can't imagine being a child or parent and trying to track a figure down. From what I understand, in most places, being an overseas collector isn't any better. But Hasbro is making money, right? So what's their incentive to improve? I would argue that, from a business standpoint, this issue needs to be addressed. There are collectors out there eager to fork over their money with nowhere to spend it. I don’t claim that my solution is ideal, or that it will satisfy everyone’s needs, but I do think it would lead to an improvement over what we have now.

How do you think toy companies can do a better job of making figures available to collectors?