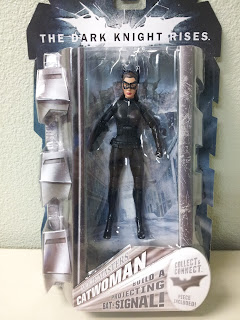 I remembered to get pictures of them in their packaging this time! To be honest, I don't think it's anything spectacular, the case shows the figure in all their splendor and the card looks like a rejected movie poster. 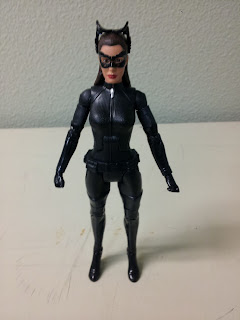 Another great sculpt as far as attention to detail goes. To be fair, it's a simple sculpt, but Catwoman's costumes have never been known for their super complexity. Still, it's like Mattel put Anne Hathaway into Wonka's TV transmitter. I didn't realize this until I saw the figure (mostly because I've been actively avoiding most TDKR related media), but this Catwoman doesn't actually have ears on her head, they're just goggles (which Mattel so graciously made moveable). 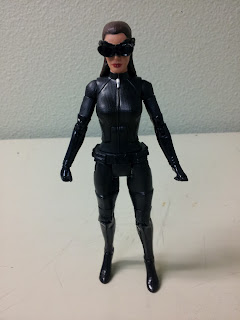 Like Batman, the paint is pretty boring, but the magic is all in the face.

The attention to detail is magnificent, the mask, her eyes, her hair. Where the figure loses me a little bit is in the articulation. She has all the same articulation as the other figures in the line (rocker joint ankles, swivel arms, knees, wrists, and full range of motion in shoulders and legs) but she has no hip swivel. Add that her hair makes turning her head near impossible and you have a Catwoman that can only ever look forward. 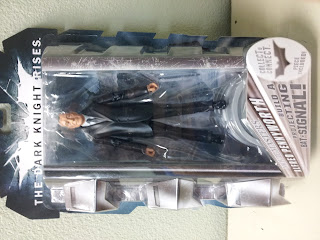 Alfred in his plastic prison. I'm just going to say this up front, this is probably going to be my favorite figure in the line. Not because he's overly complicated or super detailed, but because it's Michael Caine. 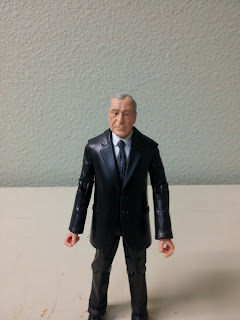 Again, nothing fancy here. Has a plastic "vest" like Bane's that can come off, but because it completes the jacket look, there's no reason to take it off. One of the cool things is that the tie is a separate sculpt, so it can be moved a little for dramatic effect. Simple paint job, but nice and clean.

Alfred has the same articulation as Catwoman and the rest of the line, but unlike Catwoman, he does have a hip swivel, lucky son of a gun. 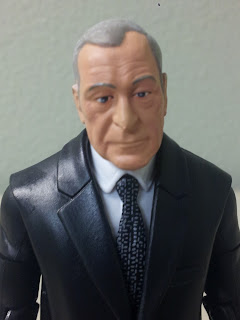 For your enjoyment, here's a mugshot of Michael Caine. Oh, wait, that's the figure, crap, where did that mugshot go? Seriously though, of the four figures I've got so far in the line, this one did the best of putting the face on the figure.

Both of them came with additional parts to the bat-signal, which won't be completed until I have Jim Gordon and John Blake. No other accessories.

Maybe it's just the newbie collector in me, but I've enjoyed these figures immensely so far and I'm excited to get Gordon, Blake and whoever the secret figure is.
Posted by ElfangorTheAndalite at 1:08 PM