Here is the extended trailer for CW's ARROW.The show stars Stephen Amell as billionaire Oliver Queen/Star City’s vigilante, Green Arrow.This is a modern retelling of the classic DC Character, the pilot is directed by David Nutter. The series is developed by Greg Berlanti, Marc Guggenheim (the team behind last year’s Green Lantern film) along with Andrew Kreisberg

Onepercase note: I noticed this little piece of comic love..  I love me some Deathstroke... 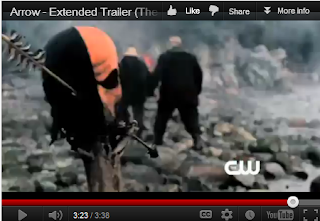 Katie Cassidy plays Laurel, a young legal clinic attorney who was Oliver’s romantic past. Laurel in the comic book has an alter ego, BLACK CANARY, but it’s not sure yet if that’s the direction that they’ll be taking for Cassidy.