Batman goes to the Movies

One more joke using the Avengers.

Avengers was firmly on it;s way to crushing any and all Summer movie competition. But, what about Dark Knight Rises? It's gonna be great right? Well... after seeing Avengers, the Dark Knight Rises trailers just left me feeling... meh.

I was asking for ideas on doodles via Twitter (@Scion_of_Primus) and Matt had asked for a Batman and Avengers joke. What could I joke about? Obviously Batman not making anywhere near the box office draw that Avengers is STILL achieving today is a good go to at this point. If Batman were to go to the movies. would he want to go see his own, or Avengers? 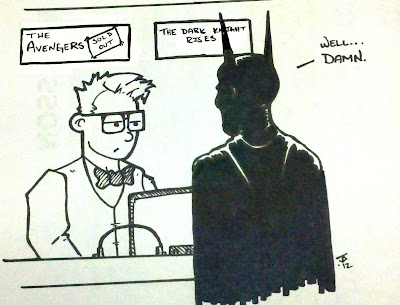 Yeah... kinda how I feel about it.

If you have any ideas, or you want to see if I can doodle something up, throw a tweet my way or a comment down below and I'll see what I can do.