Back in October, I reviewed Batman - Arkham City. As the game was coming out we were told that we would get a few different items for the game in the DLC department. The immediate DLC was for Catwoman. The DLC integrated Catwoman into the story mode of the game as a playable character... which was awesome. She had her own set of moves to master and her own set of Challenge Maps. The second and third sets of DLC were for Nightwing and Robin. Sadly, these DLCs did NOT integrate the characters into the story mode of the game and we only got to use their repertoire of moves and gadgets in the Challenge Maps.

At the end of May... 5 months after our last DLC... the Batman skin pack... we get a whole new chunk of story. Harley Quinn, mourning the loss of the Joker, strikes back in her own little tale, "Harley Quinn's Revenge"

If you played through "Batman: Arkham City", which come on... you should have by now, the game freakin' rocks... the end of the game sees the end to the Joker's madness leaving Harley Quinn alone and distraught. 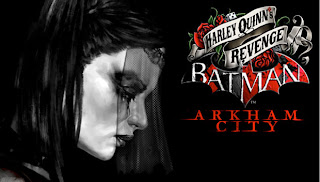 Harley gets a nice update to her look. She still has the bodice and leather look going, but with less red, more black, and even a little fur. Her make-up is smeared and she has a black veil over her face. Between the 2 games, Harley has gone through quite the wardrobe change.


True to form, Harley has hatched a plan to get revenge on Batman for doing in her dear old Puddin'. She has taken the industrial District and turned it from the Joker's Playland into Harley's Playland. The scenery is the same as it was in the games original Story Mode, but with a lot more Harley themed decoration. Mannequins wearing her iconic red and black harlequin suit, red and black diamond graffiti, and graffiti in the likes of "Mr.J 4-Ever" is now everywhere.

Even the games thugs are now decked out in Harley-wear. There's even a Harley Titan! You'll be able to check out the character designs immediately in your trophy library in the game's main menu. 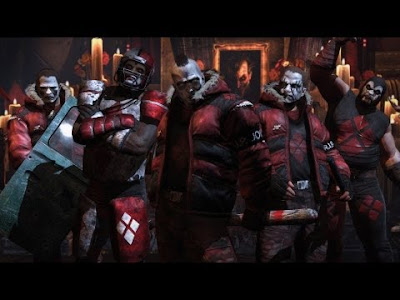 The beginning of the story takes place 2 weeks after the final events of Arkham City's story proper. Robin is  talking with Oracle about the whereabouts of Batman. It seems that he's not dealing with the what happened to the Joker or what went down with Talia very well. He went back into Arkham City to help Commissioner Gordon and the GCPD rescue some cops that Harley has taken hostage and has not been heard from.

Ok... this is my favorite new twist in the game. While I love playing as Batman... it was awesome to finally be able to use Robin IN GAME. As Robin, you get to use all of your Challenge Map gadgets and moves; from the Zip-Kick to the Bullet Shield. A few of the new add-ons Achievements require you to use the Zip-Kick, the Bullet Shield and all of Robins Quickfire moves at some point or another... like Snap-Flashing the Titan you have to fight later on. It took me a few tries, but I got them all done. 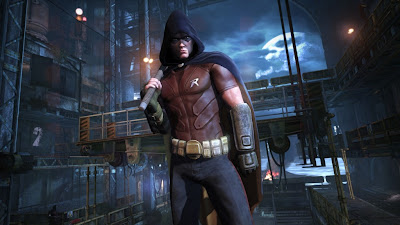 Robin starts the game in the outfit he appeared in during his cameo in Arkham City... the one above. I did find out that if you stop playing and save out and start back up, the system does give you the option to play through in one of Robin's other skins; Animated Series or Red Robin. 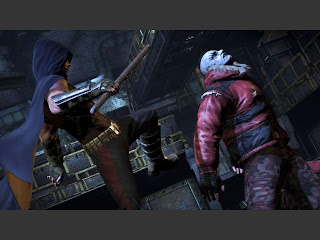 The first part of Robin's story ends after he trounces a few thugs and finds Batman's utility belt lying on the ground. Robin tells Oracle that he didn't exactly find Batman. Fade.

The scene changes to show Commissioner Gordon. He's talking to Batman about Harley Quinn and the missing cops. Batman assures Gordon that he will find them. Back in control of Batman, you enter he Industrial District on the trail of the cops. Once again, you have all of your tricks, gadgets, and combat moves at your disposal to save the hostages. Detective mode is as useful as ever as you follow a blood trail to the entrance of Harley's lair. Once you're finally in Harley's lair, Batman falls victim to Harley Quinn.

After the cut-scene, you once again take over as Robin. Robin eventually comes to a shrine built to the Joker holding Batman captive. It's up to the Boy Wonder to find Harley's code key to free Batman.

Once Batman is free, it's time for the end game... stop Harley from blowing everything up. You have 4 minutes to disarm the bombs and beat a few thugs up. If you can do it in under 3 minutes... you get an Achievement... it's actually not too tough to pull off if you're playing on Normal.

It made me laugh that Harely loves to call Batman and Robin 'dumbasses'. A LOT.

The down-side to this DLC... for the 800MS points ($10)... the length. If you just play to play it, it may take you about 2 hours. I went for one of the new Achievements, popping 30 Harley balloons hidden throughout the DLC, and it took me 3 run-throughs to get them all. I was able to find 29 of them on my own and had to resort to the internets to find the final one that I missed. So yeah... just playing, probably 2 hours.

One of the other things I found out as this DLC was released was the the Arkham City Game of the Year edition would be coming with ALL the DLC, Harley's Revenge included, for less than what I paid for my original copy of Arkham City and all the other DLC. That stings Microsoft... it stings... it stings my wallet.

None-the-less... it was fun to play as Robin... and again as Batman. Even if I didn't get to punch a shark this time.

I'm keeping my fingers crossed for some Nightwing themed DLC.


Review and shark punching by Scion of Primus