Ever play the Mass Effect series of games? PC? XBox? Doesn't matter. They're good games. I've always been more of a fan of RPGs than any other type of game. I love taking the time to 'live' through the story and going on missions and quests to make it to the end game.

The Mass Effect series puts you in the armored shoes of Commander Shepard; on a mission to, what else, save the galaxy. The game's creator's, Bioware, has populated the Mass Effect universe with a vast array of aliens and creatures. Two of them serve as the subject for today's doodle.

Like all games, Mass Effect gives us merchants. One of the races it gives us is a race of little beings called the Volus. The Volus, knowing of their physical short comings as compared to other races stick with what they do best, talk. They serve as merchants, bankers, and information brokers. Since they are so adept at being merchants, they need many ships to go about there bartering and selling and therefore actually have one of the largest fleets in the universe. The Volus come from a planet with extremely high atmospheric pressure. Out of their native habitat they have to wear a pressure suit that basically keeps them from exploding. Thanks to this, we never really get to see what they actually look like.

Come to think of it... the Volus are the Jawas of  the Mass Effect universe. 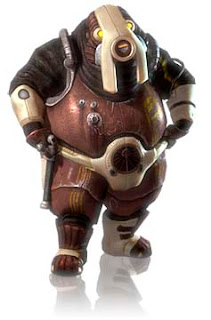 Once of the other races we get isn't necessarily a race, but a creature. A quadruped scavenger, the Varren has been brought to many a planet and is highly adaptable to just about any environment. About the size of a large dog, Varren taken and domesticated are highly loyal pets. 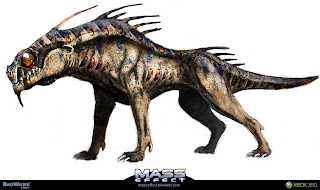 For whatever reason, I thought it would be funny to have a warrior Volus riding a Varren as a mount into battle. So...

A Volus Vanguard on a Varren valiantly venturing out to vanquish vile and villainous Vorcha. 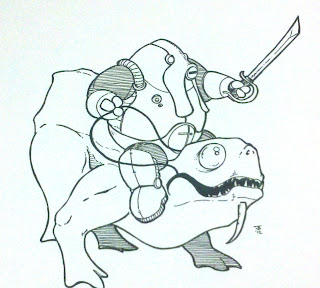 I've done a few other alliterative drawings with the idea to put together a Mass Effect alphabet. My buddy David provided the alliterative associations. I've only gotten to B... I need to work on that some more.