As I said before... Jason LOVES Adventure Time. Finn, Jake... and especially  Marceline. I think he's even ordered a Mareceline the Vampire Queen T-Shirt. But if there is one thing I know he loves over Adventure Time, it's Hellboy. That man loves him some Hellboy. And I don't blame him. Mignola's Hellboy is a truly great character. Out since the early 90's Hellboy's world became filled with rich story, deep characters and BOOM! driven action. As for Mignola, a man that can draw circles around most artists, he chose an amazingly simple art style for Hellboy. Despite large fields of black for shading and very simple detail, Mignola's work certainly delivered.... and oddly enough, seemed right for the book.

Today's sketch, once again Jason's brainchild, was doodled our for Jason. I call it AdventureBoy, Finn in Mignola's Hellboy style.

Adventure Time,
C'mon grab your friends,
We'll fight some monsters and demons.
With the Boy from Hell,
and Liz Sherman,
The BPRDs missions never end
It's Adventure Time! 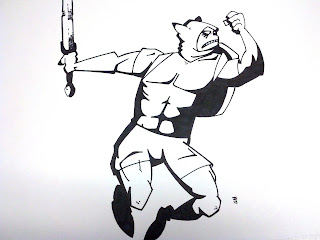