Next up in The Vintage Collection, everyone's favorite blue Twi'lek Jedi based on a former ILM employee.  Review and lots of photos after the jump.

Aayla Secura has long been a favorite Jedi character of mine.  And I'm not normally a Jedi fan.  But something about this character's brief movie portrayals, and more so her Expanded Universe appearances in the Dark Horse comics, caught my interest early on.  So I was pretty stoked when this, the first decently articulated figure of the character, was announced in early 2011.  But then it was delayed until 2012.  Because after all these years, Hasbro still hasn't figured out the whole distribution thing.  Yeah. 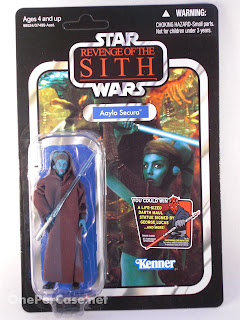 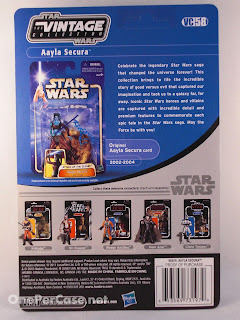 The packaging looks good, with a great shot of Aayla on the front, and a photo of the original Aayla figure from 2002 on the back.  Unfortunately, the black and silver "vintage" design is lost on this figure, since being a prequel-era-only character, she never appeared on an original Kenner card.  Oh well, still looks cool. 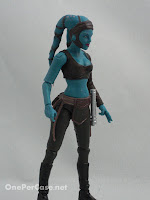 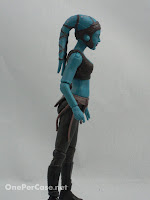 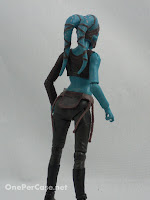 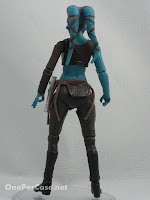 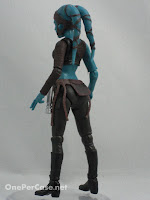 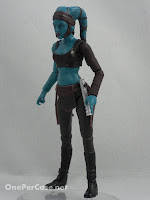 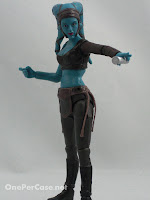 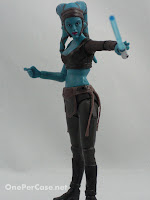 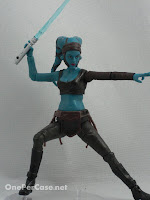 The figure, like I mentioned, is decently articulated.  Actually, more than decent.  This is one of Hasbro's better efforts in the Star Wars line.  Ball jointed head and torso, swivel waist and wrists, and ball-hinged shoulders, elbows, hips, knees and ankles. 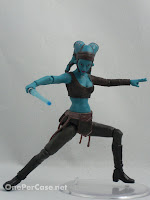 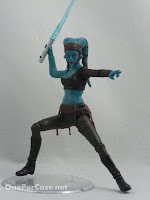 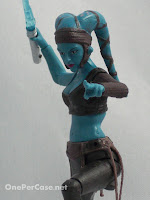 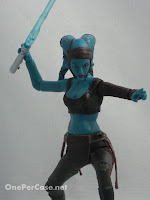 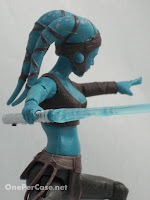 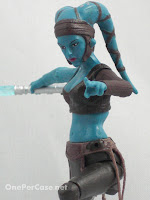 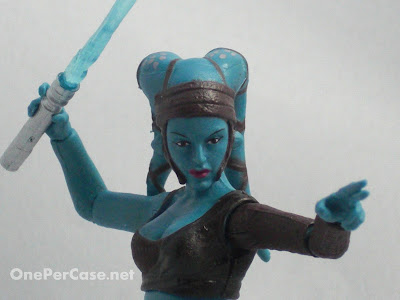 The sculpt is great on this figure, with an amazing likeness to Amy Allen.  This is really some of Hasbro's best work yet.  I'm not sure who sculpted this figure, but Hasbro really needs to utilize their talents more often, and in more lines than just Star Wars.  The costume doesn't exactly cover much of the figure, but what is there is also well done, with some great texture to the fabric. 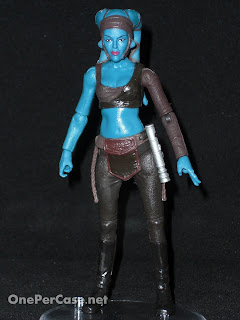 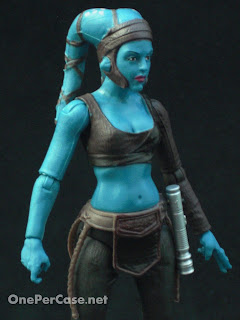 Deco is mostly good, with no major blemishes or smudging.  The blue is extremely vibrant.  Much more so than previous figures of this character.  My only complaint is that her eyes are just slightly misaligned.  She's not  full-on derpy, but when you look at her face head on, you can tell that the eyes are just very slightly off.  Both the samples I've seen in person were like this, so I assume it's a common flaw.  But it's by no means a deal breaker (not nearly as bad as Starkiller). 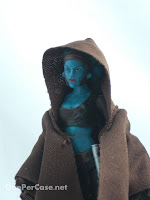 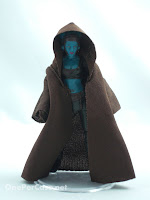 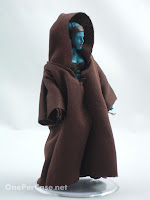 The included accessories are pretty decent, too.  You've got lit and unlit sabers, with the unlit hilt plugging into the figure's belt.  Strangely, the character also includes a Jedi robe, which she never wore in the movies, and never wore over this costume in the comics (to my knowledge).  It's pretty big for this figure, clearly not designed to fit her specifically, so it's not much use, but still, nice to have I guess.  I certainly can't complain when Hasbro gives us more accessories than they really need to. 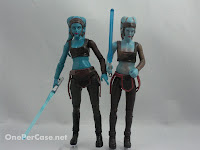 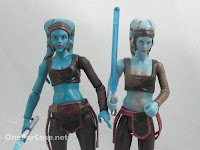 Overall, Aayla Secura is not just a solid figure, she's an outstanding figure, light years beyond her previous version.  This wave has barely shown up at  retail so far, and BBTS is sold out of this single figure, but they do have the case available.  If you're a fan of the prequels and/or the EU, you'll probably want to pick this figure up upon seeing her.

Also, this review wouldn't be complete without using the word "bloobies" at least once.  Heh.
Posted by Zak Sousa at 7:30 AM