Okay... so not necessarily TODAY'S doodle. But, like I said, I started from the beginning. The long awaited Mass Effect 3 had come out and I was playing it... a LOT! My buddy David discovered that there was a d20 Role Playing conversion out on the internets for ME3 and was thinking about running a game to see how it played. Grunt and Wrex are two of my favorite characters! So of course, in an RPG I'd have to play a Krogan.  Since I've never doodled anything from ME, I figured I'd give a Krogan a try. 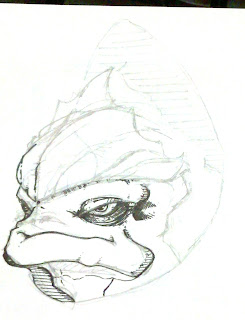 I tweeted my doodle to the folks over @Bioware and @MassEffect and they actually retweeted it! I even got a comment or two. Mostly that he looked more like a frog :p But hey, I was retweeted by Bioware... so nyah, nyah!