Thor looks and sounds terrific, as we conclude Avengers Month on OPC! 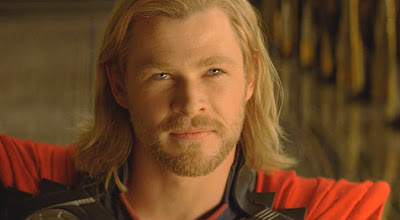 I Have no plans to die today.  None do.
I remember sitting in a crowded theatre, waiting to see a screening for a film called Thor - I have to admit that my knowledge was limited about the world of this demi-god.  I didn't even know how to spell 'Yotunheim,' much to my date's chagrin.  But when the lights came up and crowd cheered enthusiastically, I too was sold as to its merits.  Thor is a terrific addition to the Marvel film universe: it's got the perfect balance of comedy without being too much like Iron Man, the big smash element The Incredible Hulk,  and the heart of Captain America without sounding too patriotic.  The Blu-ray release looks and sounds stunning, if lacking in supplements and a quality case.

Director Kenneth Branagh (Henry V) creates a believable universe filled with Nordic traditions and so many tips of the hat to the comics that no viewer leaves the theatre unsatisfied.  Set between the worlds of Asgard and Earth, Thor (Chris Hemsworth, Star Trek) is a headstrong and immature warrior who is about to receive the kingship from his powerful father Odin (Anthony Hopkins, Titus).  However, an ancient enemy known as The Frost Giants sneak into Asgard and attempt to take back their power source, The Casket of Ancient Winters, from Odin's treasure room.  Although unsuccessful, The Frost Giants were once a proud and dangerous race who terrorized Earth a millennium before, forcing Asgard to defeat them and take the Casket away.  But Thor's not happy about the break-in, and travels to Yotunheim to uncover those responsible.  Thor and his elite team of warriors are saved by Odin from destruction just in time without discovering the culprit.  But there's a price to pay, as Thor is banished from Asgard for disobeying his father.  Stripped of his immortality and sent to Earth, he must learn what it means to lead without the use of his mighty Mjolnir, which Odin has enchanted with a promise that only someone worthy can wield it.  After meeting the scientist Jane Foster (Natalie Portman, Revenge of the Sith), Thor embarks on a journey to return to Asgard to prove his worth.  But dangers stand in the way, including the architect of the treasure room break-in, Thor's brother Loki (Tom Hiddleston, War Horse), and the spy agency known as SHIELD.  Faced with the dangers brought to Earth, his father's distrust of his actions, and the news of Loki's involvement, Thor must race to save his new friends and protect his own world before Loki and The Frost Giants destory both.

The film brilliantly succeeds in the four pillars of film-making: story, casting, music, and directing/editing.  Branagh has assembled a terrific, likeable cast with incredible acting chops.  Hopkins, Portman, and Stellan Starsgard (POTC: Dead Man's Chest) provide important anchors when actors like Hiddleston and Hemsworth aren't on screen.  But make no mistake: these two are impressive additions as well.  They have terrific stage presence and play their roles convincingly, Hemsworth chief among them, who embodies all that is Thor.  He plays savage warrior, spoiled brat, and humble man with all the believability of a veteran actor.  He and Hiddleston will go on to bigger and better things, but all of Branagh's additions work, including the casting of Heimdall the Gatekeeper (Idris Elba) and the recurring role of SHIELD Agent Coulson (Clark Gregg, New Adventures of Old Christine).  The story, while linear and predictable, is impressive in its use of showing how our characters mature, banding together to defeat a common foe.  Humor is also a nice addition to the script, with Foster seeming to run over Thor at any occasion she can, and capitalizing on his fish-out-of-water status (the scene in the pet store is classic).  Branagh's directing and editing acumen demonstrates that he once was an actor himself, giving such depth and tone to his actors and selling their characters with great effectiveness.  Patrick Doyle's thunderous and proud soundtrack is on display here, fitting in nicely with the heady themes of war, but also balancing nicely in the love scenes between Thor and Foster.  Doyle (The Bourne Identity series) gives such strength to his soundtrack that it's very listenable on your mp3 player.  The special effects of Asgard, the Destroyer, and Mjolnir never get in the way of the story, but lend a sense of scale, detail, and therefore believability to the story.  I've heard some complain about Thor, that without Hemsworth and the special effects, the story is nothing more than a re-imagining of Masters of the Universe (yes, that awful thing).  I couldn't disagree more; Thor creates a believable universe but one built on very human emotions such as corrupting power, individual choice, and the humor that can sometimes happen as a result.  It's excellent popcorn fare with a hammer - who can complain about that? 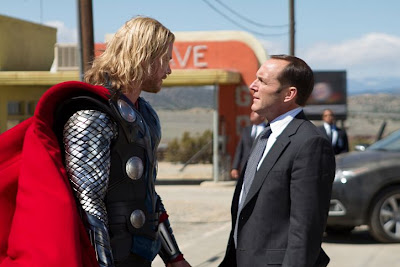 Thor is presented in a spectacular MPEG4/AVC transfer that is clean and free of any scratches or spots.  Sure, this film was shot on high-definition cameras, eliminating the potential for most issues; but the print is still excellent.  Detail on uniforms, trees, and the buildings of XX and Asgard, are sharp.  Colors, such as Thor's distinctive red cape, do not bleed into other colors or the background.  Even the journeys taken along The Rainbow Bridge, Asgard's teleportation device, are beautifully shot and highly-detailed.  Skin tone and hair are colorful and detailed as well.  Shadows are the only issue I had, which fade into black without detail.  This could be an issue with my televisions, as stills I've seen of the same scenes show up just fine.


You're not dressed warmly enough.
The Audio - 5/5 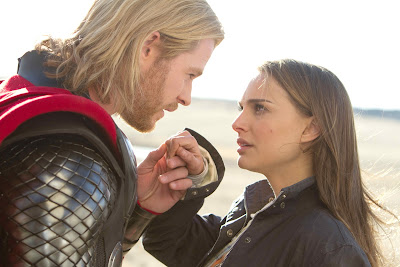 Thor is presented in a DTS-HD Master Audio 7.1 track that is simply amazing.  It's loud and aggressive, without losing any clarity.  Sword clashes, falling ice, and hand-to-hand combat all sound terrific here.  I also like the surround track here, which comes complete with town chatter in the restaurant, conversations at the Mjolnir site, and the sounds of The Rainbow Bridge as Thor smashes it at film's end.  Explosions pack a real punch in the LFE, giving your receiver a nice workout.  Dialogue is always clear, which keeps you from playing The Remote Game between soft and loud scenes.  Once again, Patrick Doyle puts together a terrific music track for us, completing the cinema experience with a proud Thor theme which sounds terrific and pulses through various scenes.  Paramount has released another winner here, and it's great to see them accomplishing this more frequently. 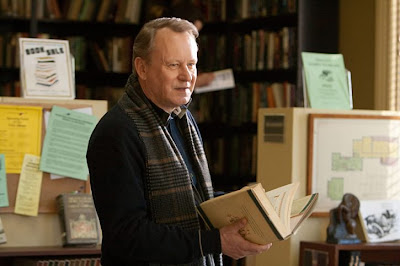 While not as deep as the Iron Man: Ultimate Edition, each offering is impressive, and helps to complete the home experience.  All video tracks are presented in HD:


There are a few versions of the film, from a single-disc to the 3D three-disc offering.  While American audiences were given a half-baked Best Buy version with a glossy slipcover and the Issue #1 cover on the back, UK viewers were treated to a superior embossed steelbook.  Why a movie made in America about an American superhero was given such a poor release in The States is beyond me.


Live, and tell the stories yourself.
The Final Word - 5/5 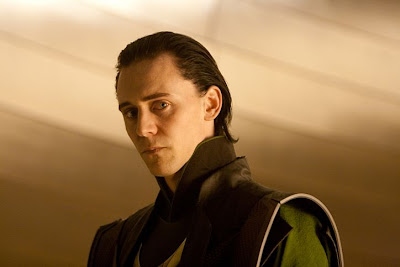 Thor is a superior offering from Marvel that demonstrates the studio's growing maturity at storytelling.  The film defines our character and his world, but tells a very human story that's appealing, funny, and well-cast.  The video and audio transfers are exceptional; and while the supplements are not as diverse as the Iron Man releases, they are more plentiful than most.  Crank up and enjoy Thor and its supplements, but do so before seeing The Avengers.  It's a great story and certainly worthy of an pre-Avengers screening party.  Highly recommended.
Posted by Matt Cummings at 5:00 PM