Review: Marvel Legends Avengers Movie-verse Figures of the Past

The Avengers movie premieres here in the US in less than 48 hours, but the Legends-scale Avengers movie figures are still nowhere in sight.  So lets take a look back at some of the best (and worst) releases from past movies in the Marvel Cinematic Universe.

A couple weeks ago, I posted individual reviews for Captain America and Thor from their respective movie lines.  Those figures are awesome, and you should probably go buy them if you don't own them already.  But what about other movie-verse figures in the 6-inch scale?  Other than the upcoming Walmart exclusive Avengers line, what are your options for completing a team of movie Avengers?  Well, I figured this was a good excuse to shoot some photos, so here are a few of my favorite figures.... 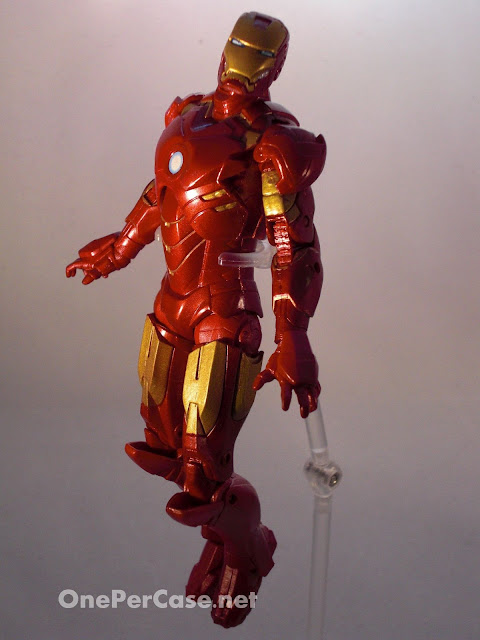 Iron Man has always been my favorite Avenger, and I'm a big fan of both Iron Man movies, so it's not surprising that I have many, many figures of this guy.  Hasbro gave us a mainline of 6-inch movie figures in 2008, before converting their Marvel movie lines to 3 3/4" with the launch of Marvel Universe in 2009.  Unfortunately, the 2008 figures weren't that great in terms of sculpt or articulation.  But Hasbro made up for this with several stunning figures for Iron Man 2 in 2010 (unfortunately, most of these were Walmart exclusives). 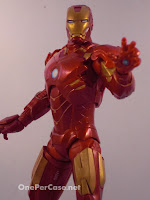 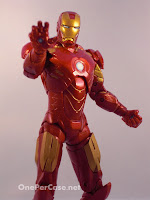 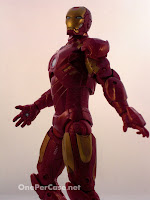 The Mark IV armor is my favorite movie design.  I prefer the circular RT over the triangle.  To quote Whedon, "the triangle is ass".  Unfortunately, the Mark IV figure was the hardest to find of all the Walmart exclusives for me.  I never once saw it in my area, and had to buy it online. 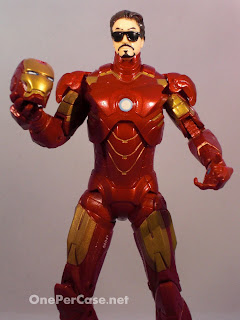 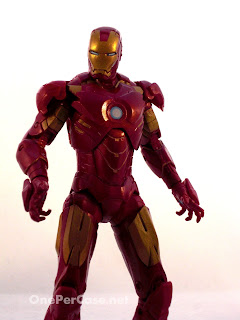 This figure kicks ass not just because of it's outstanding sculpt and articulation, but also because it includes three different pairs of alternate hands, AND an alternate Tony Stark head sculpt (something we sadly never got in the 3 3/4" line).  The paint is also great.  The colors are dark and metallic, very true to the movie look.  I'm not a big fan of paying secondary prices for figures that should be easily found, but this guy was worth a few extra bucks. 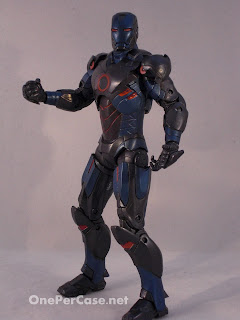 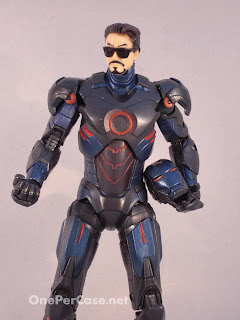 The non-exclusive Armored Avenger line had a cool repaint of this figure, including the alternate sets of hands but minus the Stark head, in the classic Stealth Iron Man deco.  Even though it's not movie-accurate, I love this figure just because it's a modern/realistic take on a classic comic look.  The dark blue and gunmetal deco looks sharp!  And the Stark head, although not included, still fits on this figure.  This figure is still easily found in most Toys R Us stores. 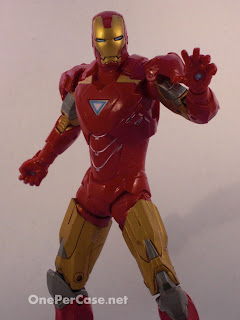 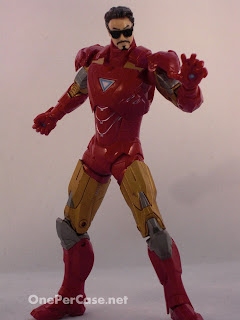 If you prefer ass-y triangle looks, then the Mark VI armor might be for you.  This is also a great figure, and comes again with three pairs of hands (seriously Hasbro, all your figures should include alternate hands like this), but no alternate head.  The RDJ head from the Mark IV does still fit, though.  The paint is much brighter and more plastic-y looking on this release.  Aside from being a Walmart exclusive, this figure was also re-released in the mainstream Armored Avenger line, and will be repainted in a battle damaged deco for the upcoming Avengers line. 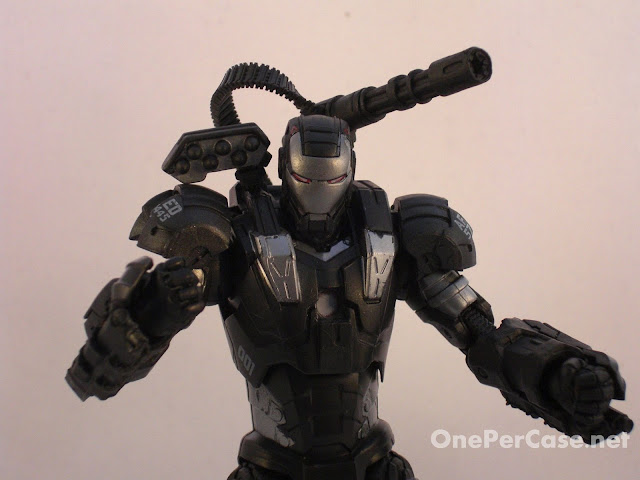 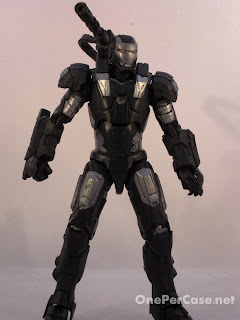 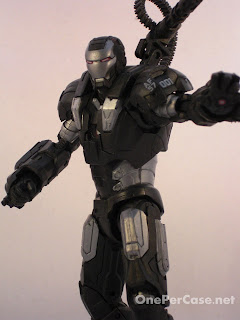 While War Machine may not be in the upcoming movie, I'd kick myself if I didn't mention this figure, also first available as a Walmart exclusive in Iron Man 2 packaging, but then re-released in Armored Avenger packaging. 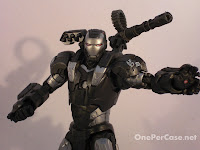 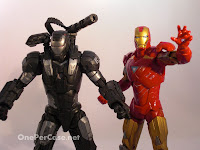 Again, three pairs of hands, outstanding deco, sculpt and articulation, and even detailed weapons like the mini gun with ammo belt and the missile pod.  The only thing missing from this figure was an alternate Rhodey head.  How awesome would that have been?  Still, this is one of my favorite action figures of all time.  Both War Machine and the Mark VI can also still be found in some TRU stores.

When Hasbro released the original Iron Man movie figures in 2008, they also released this Target-exclusive Marvel Legends Incredible Hulk.  This was larger than the mainline Incredible Hulk figures, which are pretty much perfect scale with the 3 3/4" lines.  This figure reused the original ToyBiz Marvel Legends Series 1 Hulk body with a new head (which looked like it was suffering from a stroke). 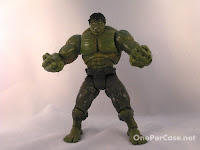 The figure doesn't have fists, which is a huge miss for a Hulk figure, and the articulation is sub-par compared to today's standards.  The sculpt is nice, however, and still mostly holds up even today.  This is your only choice for a movie Hulk in Legends scale until the new one comes out later this summer, and this figure is easily had for little cost on the secondary market. But I wouldn't recommend spending anything more than a couple dollars for him.  It's just not a very good representation of the Hulk.

And what would the Avengers be without Sam Jackson Nick Fury to assemble them?  I thought it was incredibly lame on Hasbro's part to not include movie versions of the villains from the Cap and Thor movies in last year's 6" lines, but it was pretty cool of Hasbro to give us a movie-inspired Fury in the Cap line.  This figure actually recycles the body of the two-pack Nick Fury from a couple years prior, with a new head.

Fury comes armed to the teeth with two handguns with working holsters and two assault rifles.  The sculpt and deco are great, and articulation isn't bad either, but the shoulder joints are a little stiff and difficult to move.  This figure earns bonus points for being compatible with both the movie and comic figures, and extra bonus points just for being based on Sam Jackson.  Sorry Jason, Sam Jackson IS Nick Fury to me now. 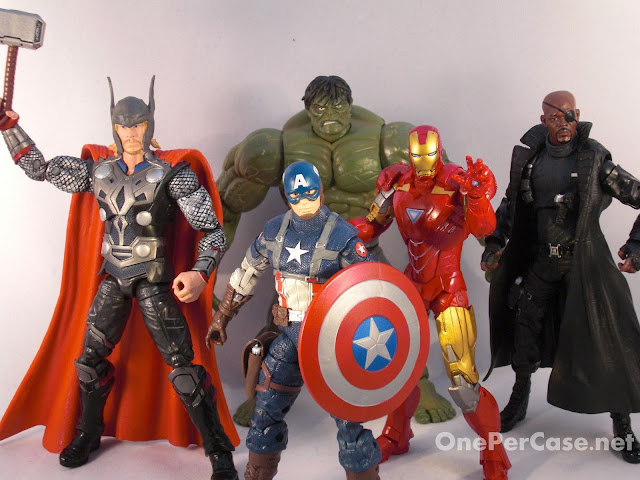 And that's it for current movie-verse figures.  There are still a lot of opportunities for Hasbro to give us great movie figures in the 6" line, and I hope to see a continuing line go on after the Avengers movie line comes and goes.  How awesome would a 6" Red Skull figure be in his black leather trench coat?  Or how about the Son of Coul, or Cobie Smulders?  And of course, what fanboy isn't hoping for a ScarJo Black Widow? Lets get going, Hasbro!