One of the most popular Avengers characters amongst fans, and one of the most under-appreciated by Hasbro, Natasha Romanoff… err, Natlia Romanova… err, whatever her real name is this week, has been a notoriously sought-after and oft hard to find figure in her previous incarnations.  How does the latest rate?  Find out after the jump.

Pretty much every figure based on the Black Widow that I can think of has been a hit among fans, and thus, often difficult to track down at retail.  The amazing Marvel Legends and Marvel Select versions have been a smash hit, as well as the previous Marvel Universe incarnation.  Fans are chomping at the bit for the upcoming movie version, and many, including myself, are still more than a little bummed that the Iron Man 2 and Marvel Universe variant versions never made it to market.   Hasbro foolishly thinks that female figures just don’t sell.  False, Hasbro.  Crappy female figures (like mid-90’s Princess Leia’s) don’t sell.  Awesome, well done female figures, like badass super-heroines, sell like friggin hotcakes.  (Seriously, Hasbro… there hasn’t been one single female peg-warmer in your Marvel Universe line).  So, I expect that this figure will continue to be hard to find at first, even as this wave of light-up base figures starts to become more common. 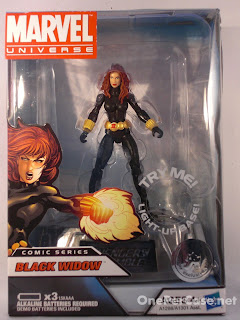 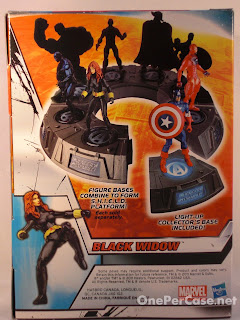 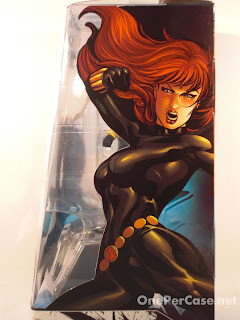 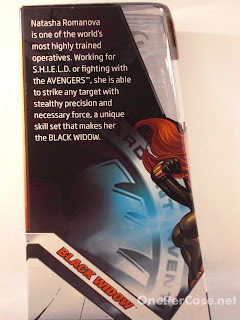 The packaging for this series is actually really neat.  You’ve got a slick window box with an opening for a try-me function, and some great artwork of the character both on the front, and on the side.    Hasbro’s packaging for the MU line has always been pretty hit-or-miss in my eyes.  This is definitely hit.  One interesting note:  The packaging specifically calls out "Comic Series" on it.  This is typically used in the movie lines, NOT the main Marvel Universe line, which is always "comic series". 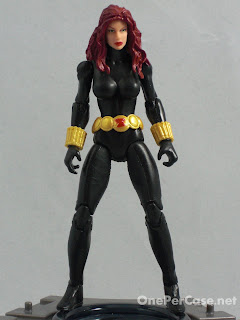 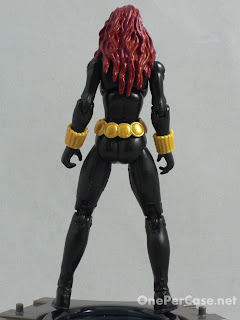 The figure itself is a little more in the grey zone.  Yeah it looks good, but I’ve got a few fundamental complaints.
First, why must you insist on continuing to use this old female buck, Hasbro?  It doesn’t look horrible, but it doesn’t look nearly as great as your newer female buck.  The articulation on this figure suffers for it.  We’ve got 2009 MU articulation where we really should have 2012 MU articulation. 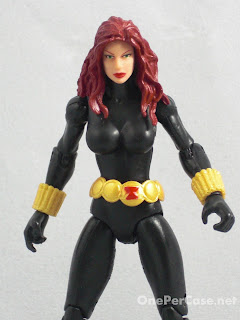 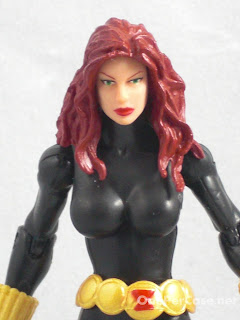 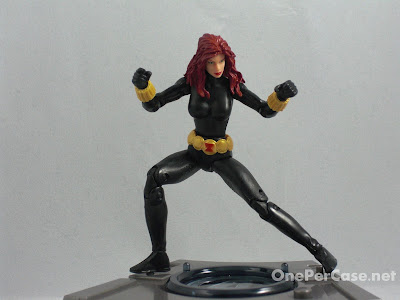 Third, where are her weapons?  Considering that this character is pretty much ALWAYS armed with some sort of gun, there really should be at least one, if not two or three, packed in here.  Especially considering the $16.99 price point.  And I don’t want the rehashed M-16 packed in with half the MU figures, either.  Give us something new. 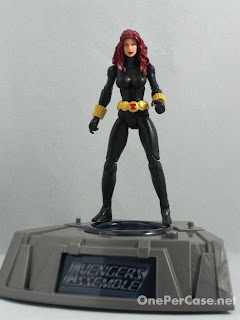 As far as paint goes, it’s hard to mess up a black bodysuit with gold bracelets and belt.  But the red hour-glass on the belt was just a little sloppy on my sample, so that’s something to watch out for. 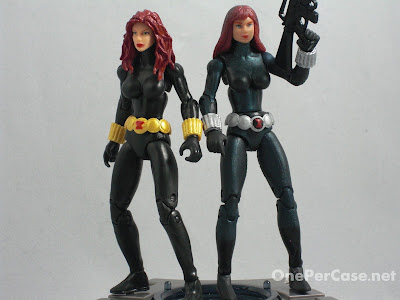 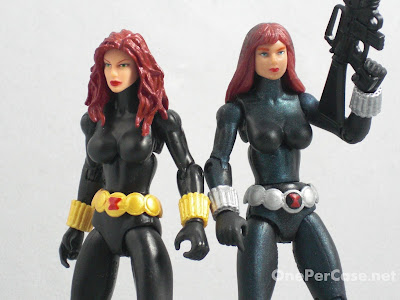 So all that said, despite the fact that this figure is basically just a repaint of the single-carded Black Widow with Jean Grey’s head, this figure is definitely kind of neat and worth picking up, if only for the sole fact that it’s Black Widow.  And really, with both this and a movie version coming out this year, what are the chances that we’ll see a better version any time soon?  Exactly, slim to none. 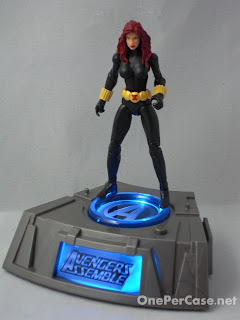 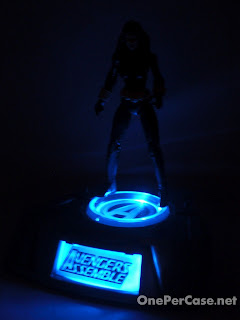 The light up base is pretty cool, too.  It has four foot pegs to allow for a variety of standing poses.  And the LED is a nice bright blue.  If you combine 8 of these bases together, you get a pretty neat platform for your Avengers to assemble on. 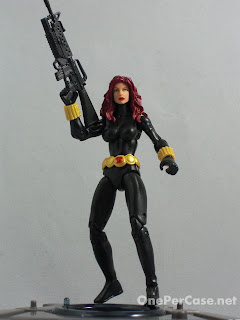 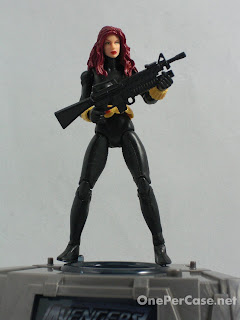 Black Widow and the rest of the wave are starting to hit Toys R Us stores now, and are available on the Toys R Us website. 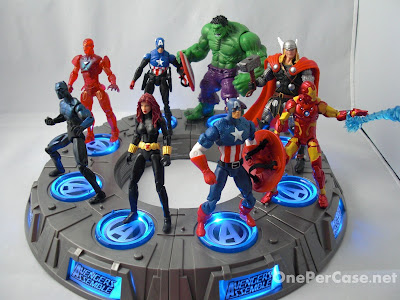 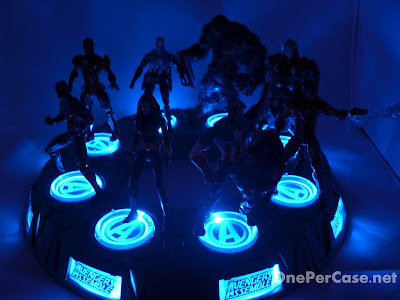 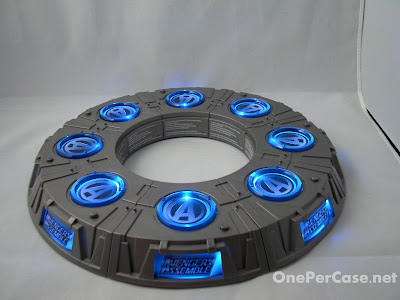 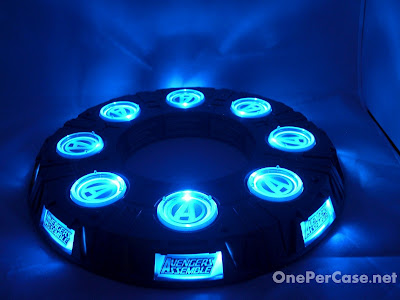 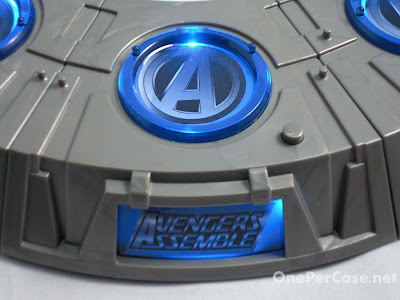 A note on the light up bases:  There appears to be a variant to the base.  As I was setting all of these up to take photos for this article, I noticed that two of my bases, likely from the older Series 1 from last year, did not include the FCC compliance statement printed on the inside of the base, AND, more curiously, have the outer foot pegs located further forward on the sides of the base. 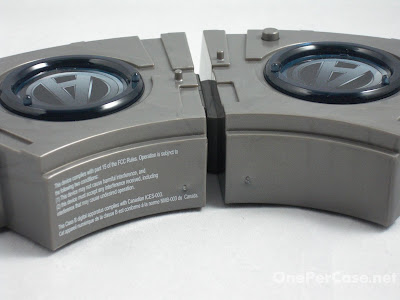 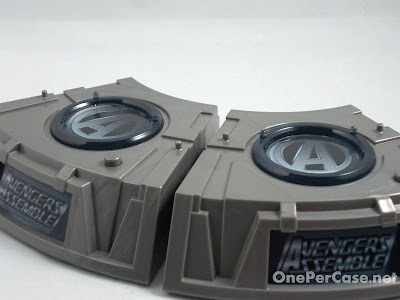