Battleship is a clean miss that borrows too much and inspires too little.

Hollywood must really be desperate these days: it's bad enough that audiences have endured reboots ad nausiem, but when we see movies based on popular board games, it's time for an intervention.  Take the most recent example of an industry about to go squarely off the tracks - Battleship.  It looks like Transformers, feels like Top Gun with a hint of Star Trek, and its premise is a mish-mash of several noteworthy alien invasion flicks.  While I will admit the ocean backdrop looks and sounds terrific, it's the story which takes on water early.  Filled with more cliches than an interview with an NBA player and reeking of second-rate talent, Battleship plods on too long at the beginning and only somewhat redeems itself at the end by parading real-life veterans in front of the cameras to man the old USS Missouri.  It's popcorn fare gone terribly wrong.

Battleship wastes the first 30 minutes languishing in several slow plot developments, including the James Kirk-like rise of Alex Hopper (Taylor Kitsch, X-Men Origins: Wolverine) from drunk brother of Naval Captain Stone Hopper (Alexander Skaarsgard, True Blood) to a Lieutenant in a mere 15 seconds of screen time.  Alex is self-destructive, prone to embarrassing his team and earning the wrath of Admiral Crane (Liam Neeson, Taken), who promises to run Alex out of the Navy as soon as possible.  In the meantime, we learn that the US government has discovered Planet G, an Earth-like body millions of light years away .  Hoping to meet aliens (and who doesn't these days), the Fed decide to send a message transmitted via a powerful satellite to Planet G, only to learn they don't like us very much.  While no explanation is ever given for the rude retort, we soon realize that planetary extinction is the menu de jour.  As Alex deals with his impending dismissal from the Navy, G sends three ships to Hawaii, separating Alex and two other vessels from a Japanese and American flotilla participating in war games.  Inside the force field, G has brought nifty weapons to the party, each of which makes Swiss Cheese of Alex and his friends.  Together with his Japanese counterpart (Tadanobu Asano, Thor) who sees his own ship destroyed, Alex and a handful of survivors use every trick in the book (yes, even a Battleship-like digital board to track G's warships), going so far as to bring the old USS Missouri out of retirement for one final run against the aliens.

Character development and excellent dialogue are not Battleship's strong suits. After seeing his brother perish aboard one of the trapped vessels, Kitsch turns to a fellow officer and says "I have a bad feeling about this."  Thank you for stating the obvious.  The story is littered with oddly-placed one-liners like these which both Kitsch and singer Rihanna clumsily perform.  I guess it's too much to have an intelligent action summer flick to enjoy, but director Peter Berg (Smokin' Aces) and writers Eric and John Hoeber (Red) don't seem to care, sacrificing choice moments of character development for expensive battle sequences that lack the action of a true summer blockbuster.  Berg throws every cheap patriotic device possible into the film, going so far as to cast real Iraq and WWII vets throughout the film.  Too many of them come off as stiff, producing nothing more than nervous laughs from the audience.  Neeson mails in his paycheck role with perfection, delivering just enough lines to be recognized without offering anything of substance.  The 0-for-2 Kitsch (see John Carter) is almost painful to watch, his lack of charisma forming giant holes when the action subsides.  Kitsch's love interest Brookyln Decker (What to Expect When You're Expecting) is nothing more than nice window dressing, and Hamish Linklater (New Adventures of Old Christine) seems like a cheap imitation of Jeff Goldblum's character from Independence Day.  Steve Jablonksy's score is a saving grace, providing more of the same patriotic war music he brought to Transformers. 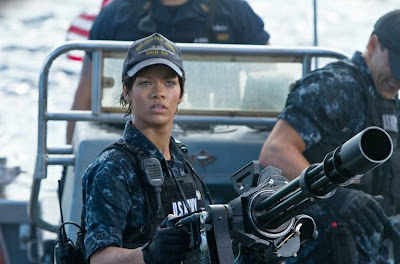 Hollywood hasn't made good naval war films since K19: The Widowmaker and the intense Crimson Tide and Hunt for Red October.  Battleship is lost at sea, settling instead as a posterboy for all that is wrong with an industry that can't seem to stop practicing the concept of "Just because you can, doesn't mean you should."  It's rated PG-13 for violence and sexual situations and runs 131 minutes.
Posted by Matt Cummings at 10:04 PM