Next up, we examine Hasbro’s 3.75” Clint Barton. Did Hasbro hit a bullseye with this Hawkeye? More after the jump.


Unlike Black Widow, Hasbro’s got just a little bit more love for Hawkeye. We’ve already seen a 6 inch version and a Mini Mugg, now we get him in the 3.75” line, and he’s actually packed two-per-case, making him twice as easy to find as Widow. Also, I wouldn’t be surprised to see him carried forward in future assortments. 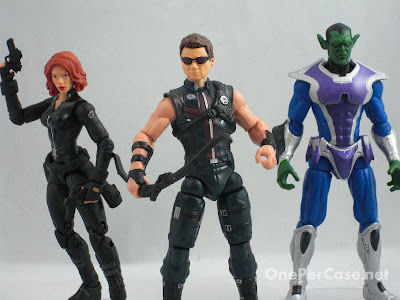 Unfortunately, Hasbro didn’t put all that love into the design of the figure himself. 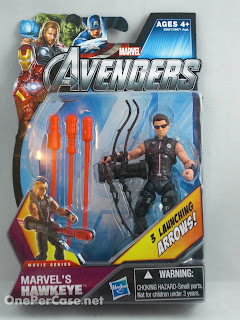 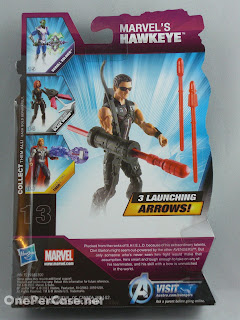 The packaging is old news. Avengers card back, purple accents (nice nod, there, Hasbro), but nothing extraordinary. Free Clint from his prison. 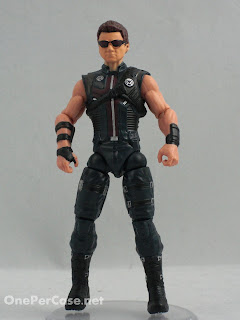 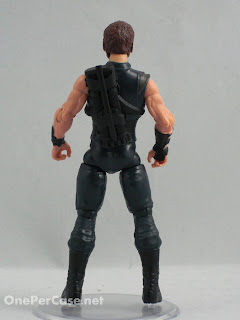 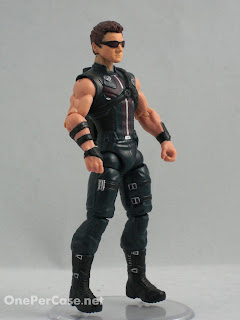 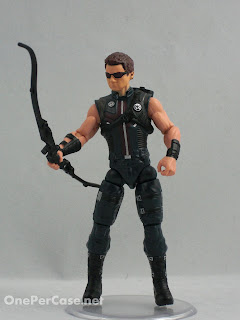 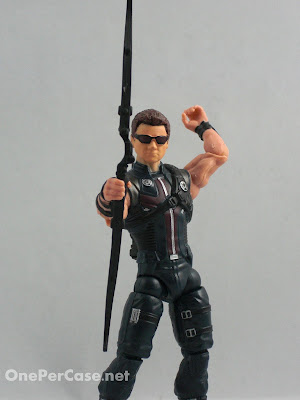 Right off the bat, you’ll notice that Hawkeye has the same reduced articulation as most of the rest of this line. No wrists, ankles, waist or torso. This is particularly disappointing in Hawkeye’s case because it makes it impossible to get him into a good, realistic looking bow-drawing pose. You can’t even make him look like he’s believably reaching back to pull an arrow from his quiver. THIS is why articulation is important, Hasbro. If the figure can’t strike their signature pose, or look like they’re actually using their weapon/accessory, you’re doing something wrong. Now, Clint will just stand on my shelf next to his team mates holding his bow at his side, looking as if there is nothing currently going on to avenge. 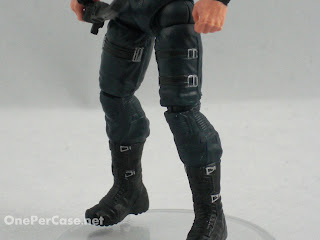 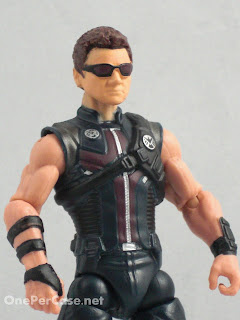 Hawkeye’s sculpt is good, though. The costume looks pretty much like it did in the movie, with lots of detail sculpted into the lines, seams, padded areas, etc. The head sculpt actually looks pretty close to Jeremy Renner, as far as I can tell. But he’s wearing sunglasses that he never actually wore in the movie, so that’s a minus. I’d love to see a running change or variant of this figure without the glasses, and even a repaint with crazy enchanted-by-Loki eyes, but I doubt either of those will happen. (Hear that Hasbro, free awesome ideas that you can just feel free to use.) 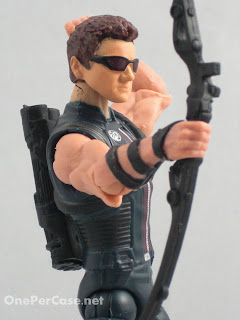 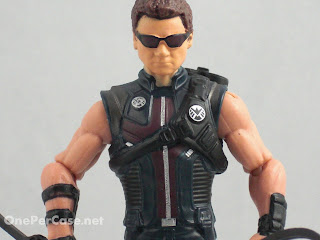 The paint on my sample is mostly good, but one of the S.H.I.E.L.D. emblems on the chest is a little smudgy, and his hairline and glasses have just a little bit of over over-spray, so be on the look out. Other than that, no complaints in the deco department. The costume looks accurate to the movie, and you’ve got just enough color to make it interesting, while still maintaining the spec-ops feel that was obviously intended with the suit. 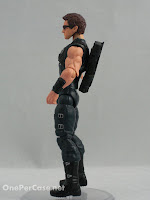 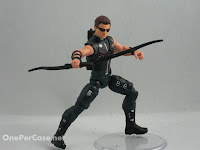 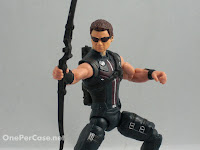 Hawkeye’s accessories are a little odd. First of all, his quiver is permanently attached to his back. It is very securely glued in place, so good luck removing it. It also doesn’t have any arrows in, just like the 6 inch version. And, like that version, Hawkeye doesn’t include any arrows AT ALL. Since the Marvel Universe Hawkeye, and numerous G.I. Joe figures, have all included individual arrows, you might be able to steal from one of them, but it’s still disappointing that a few trick arrows with different tips weren’t included here. A grapple-arrow with cord/zipline-thingy could’ve been the perfect over-sized shooty accessory, but that would’ve made too much sense. (Hear that Hasbro, MORE free awesome ideas for you). 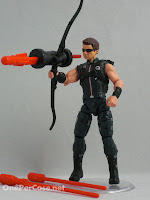 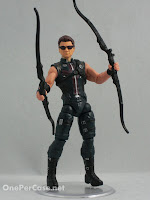 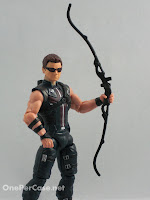 Then there’s the bow itself. We actually get two bows, both exactly identical, but one is pegged into the spring-loaded missile/arrow launcher. At first, I thought this was permanently attached, thus making the whole spring-loaded bow uninteresting and useless to me. But no, you can actually pull the bow right off of the launcher, and you’ve got a second “realistic” bow. That’s cool, because now you have a spare, but I would’ve rather they just used that extra plastic to mold up a few realistic looking arrows. The missile/arrow things that are included look way too missile-like to even pass for arrows. 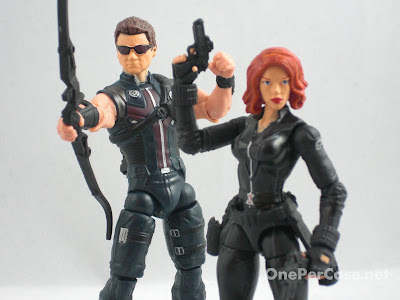 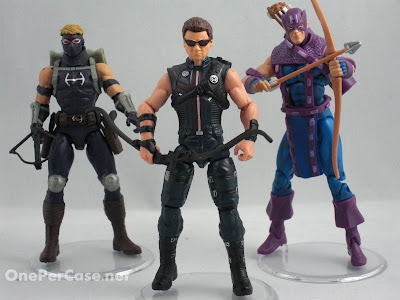 Overall, Hawkeye is a great addition to a line that is just slightly less disappointing than it is awesome, because he, too, is slightly less disappointing than he is awesome. I love the figure, I just wish it had a little more love put into it (like the 6 inch version). I expect that this figure will also fly off the shelves, especially now while it’s just hitting, so you may not want to pass him up when you see him. BBTS also has the case, set, and single available for pre-order.

UPDATE 6/3:  I've seen a couple questions online about whether or not Hawkeye fits in the cockpit of the Quinjet.  I'm happy to report that he does, even with the quiver on his back.  Also, I picked up a second Hawkeye the other day, with a better paint job than the first (no smudged S.H.I.E.L.D. logo), and this sample had the quiver glued in place much more loosely.  I was able to spend a few moments working if back and forth, and got it out oh his back.  It plugs back in just fine and stay in securely.  So the quiver IS removable if you're willing to put a little work into it.

Here's a couple new photos.  In the first, the quiver IS on his back, and he fits in the cockpit with plenty of room to close the canopy.  In the second, you can see the shape of the peg and slot for the quiver, to give a better idea of how to remove it. 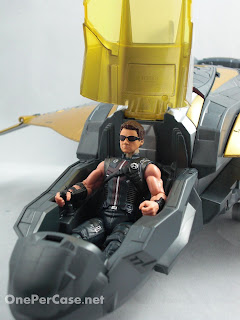 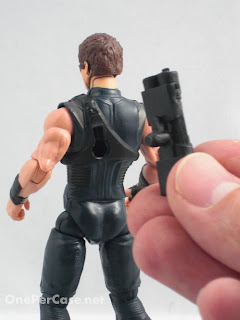 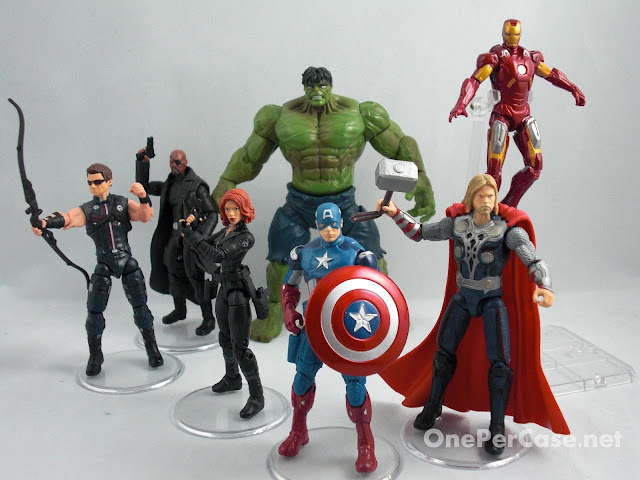 Special thanks once again to our good friend Sean for the assist with this wave.
Posted by Zak Sousa at 8:30 AM