Hasbro’s third wave of 3.75” Avengers is here! And first up, we’re going to look at the team’s most under-appreciated member. As far as the 3.75” figures go, she’s also the most awesome. Coincidence? I just call it par for the course with Hasbro. Check out the super articulated awesomeness after the jump.


All of the other members of the movie-verse Avengers have had AT LEAST 3.75”, 6” and Mini Muggs released, if not also kiddie-targeted, even more under-articulated figures in 6”, 8” and 10” scales. Hell, even Nick Fury has a Mini Mugg. So why such little love for Black Widow, big H? Is it because she’s a female, and “boys don’t buy female action figures”? Well your infinite wisdom continues to reflect in your distribution, case assortments, peg clogging, and the secondary market prices of certain characters. This will be one of them. Well done, Hasbro. You continue to frustrate collectors. 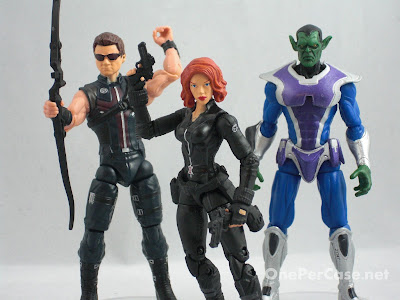 Black Widow is the classic “one per case” (HA, name of the website!) figure. In the wave 3 case assortment, we get three (!!!) repacks of Hulk from wave 2, but only one of the lonely female heroine. And while wave 4 case assortments have yet to be revealed, you can bet that she won’t be included in them. Sif from the Thor line, anyone? And… oh yeah, Captain America and Iron Man didn’t have ANY female characters in their lines. There was supposed to be a version of Black Widow in the Iron Man 2 line, but that was canceled. 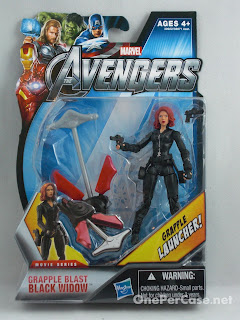 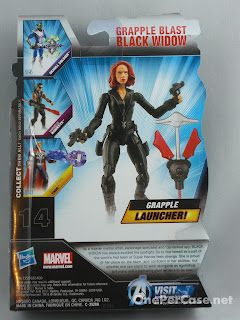 This figure of Black Widow comes on the standard Avengers card back, so no real new territory here. The accent color on the card and bubble is silver. Tear, rip, remove, discard. This packaging is only serving as the final barrier between you and the figure you were undoubtedly worried about never seeing in person. (I’ve gotta admit, I had serious doubts we’d ever see her hit retail. But credit where credit is due. Good job on that part Hasbro. Now just ship more of her.) 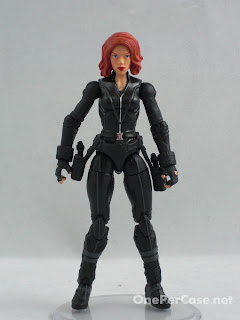 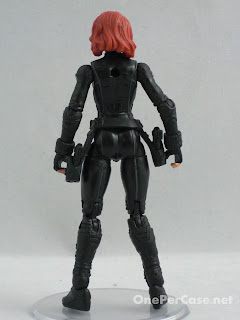 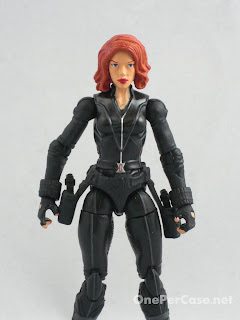 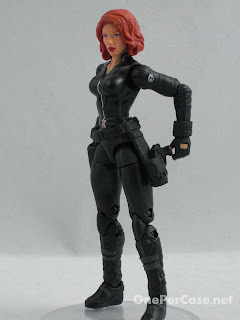 Contrary to what some assume, this figure is not the same sculpt as the previously canceled version. She’s an entirely new sculpt, and is nicely detailed. The lines and seams on the suit are all present, so she doesn’t just look like a smooth, undetailed buck painted black. 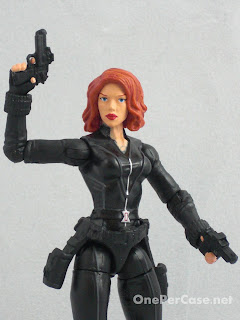 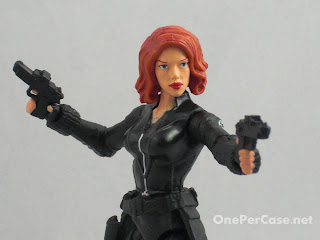 The face actually looks pretty damn good, and the likeness to Scarlett Johansson is pretty remarkable, but the paint job dumbs-down some of the detail. It’s another case of the sculpt being better than what the factories can keep up with. I saw photos of the raw, unpainted sculpt from the original sculptor a while back ("2dtoys" on Facebook, look him up), and production samples just can’t do it justice. This is the same guy that sculpted the amazing Pursuit of Cobra Snake Eyes and many other notably badass figures in recent years (including a lot of the heads in the upcoming Joe Con box set), so you know Black Widow is quality. 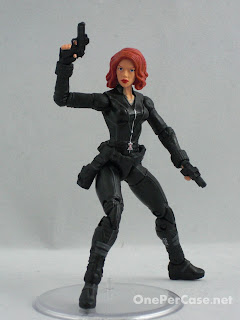 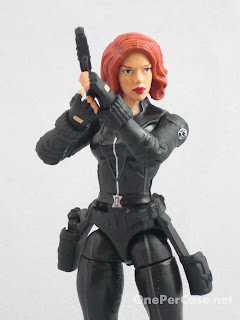 The paint job is pretty simple- mostly black with some gray and silver details on the suit, then the skin, eyes, hair and lips. On my sample at least, the paint is pretty close to perfect. Just a little blemish on the skin of the chest. The eyes and lips are free of smudges or over-spray. The tiny S.H.I.E.L.D. emblems on each shoulder are perfect, as is the hour glass on the belt buckle. The grey detailing on the seams is all pretty clean, too. No complaints here, but still worth double checking before you put down the cash, if you can. 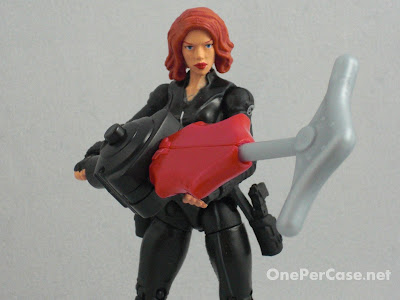 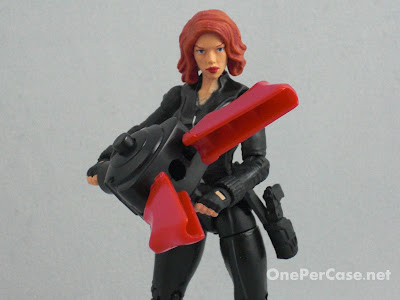 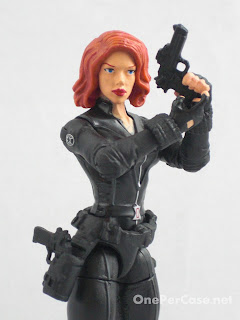 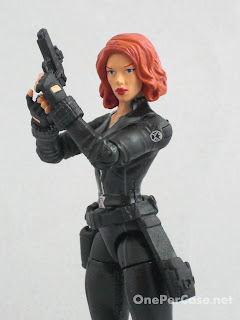 Widow comes with some real hit and miss accessories. You’ve got her wrist stingers (which are indeed separately sculpted pieces), two pistols, a belt with dual holsters for the pistols (awesome), and… a giant shooty Asgardian grapple gun? The spring loaded junk is a repaint of an accessory that was included with a couple of the Thor movie figures. It doesn’t fit in with Widow at all. You can safely lose it and not feel bad. Did I mention how awesome the handguns with holsters are? 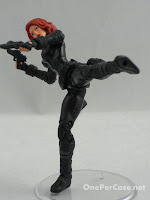 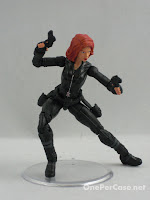 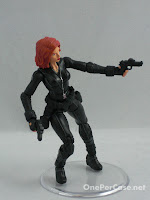 Now the burning question, articulation. I am happy to confirm that Black Widow breaks the pattern held by the rest of this line. The prototype shown at last year’s conventions was fully articulated, but I was worried that some of those POA’s would be lost in production. For the record, Black Widow has a ball jointed neck, ball hinged shoulders, elbows, hips, ankles (with rockers!), double hinged knees, and swivel thighs and wrists. She still lacks any sort of waist or torso articulation, which is mildly disappointing, but in light of the rocker ankles, and the wrists that the rest of this line lacks, I’m willing to deal with it. 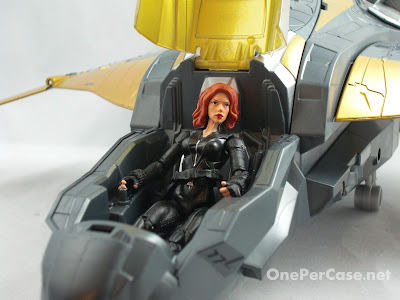 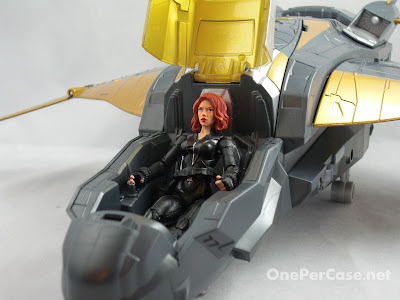 Overall, this is not only a solid figure, she’s the best in the Avengers line, as far as I’m concerned. She’s absolutely worth going out of your way to find. Wave 3 began hitting Toys R Us, Target, Walmart and even K-Mart last week, so get to hunting now. There’s no telling how long this wave will ship, and later waves in the Marvel movie lines are notorious for being elusive. BBTS also has Wave 3 cases available for pre-order, but sets are unfortunately pre-sold out. Now, Hasbro, where are my 6-Inch and Mini Muggs versions? 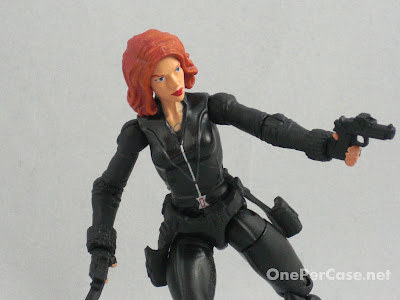 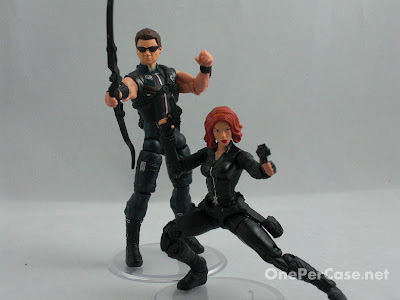 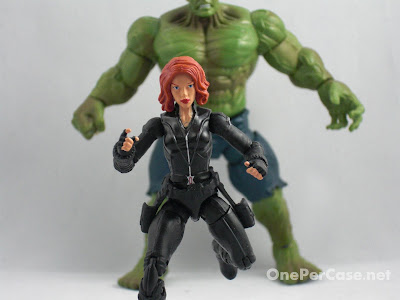 Huge thanks to our close friend Sean for helping me score this wave over the weekend. He sacrificed these figures to me so that you may be able to see them here now.