AvX Review #1: Which side are you on?

The wait is over! Avengers vs X-Men is finally here, and it's everything you've been wanting and waiting for. The conflict begins now, and only time will tell who will come out on top.

**Naturally, there are huge spoilers involved, so venture on at your own risk!** 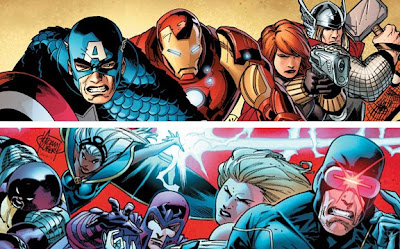 First off, I have to say thanks to the Sacramento A-1 Comics. Jason was telling me that they had an awesome premier party. There was a raffle that they used to give a bunch of sweet stuff like variants of the Avengers vs X-Men #1 poster, t-shirts and some awesome Avengers paper weights. Jason managed to walk away with one of Cap. 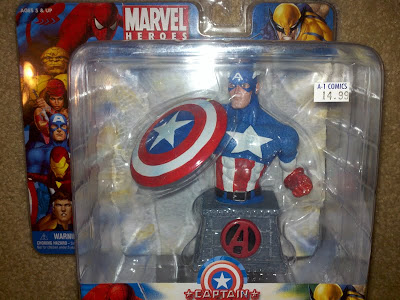 And of course, there was other swag that everyone walked away with like these sweet buttons

So thanks again to A-1 Comics in Sacramento! 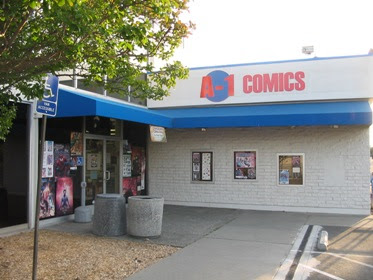 If you've been out of the Marvel Universe for a while or if this is your first foray into the universe, I recommend you take a look at this link first, they've done a good job at giving a quick summary of what you need to know as set up for the Marvel Summer event.

The book opens with the Phoenix Force moving through space, presumably consuming a planet en route to Earth.

Cut to Avengers Tower where Iron Man and Protector are having an ego measuring contest as Ms. Marvel arrives. Just as Iron Man is about to call in Captain America to settle things, something comes crashing down. Naturally the Avengers immediately give chase, stopping all sorts of disasters along the way. At the crash site they find Nova who only gives an ominous warning before slipping into a coma, "It's coming."

Over at Utopia, Cyclops is training Hope so that she might be able to take on the Phoenix Force. Cyclops is giving her no rest or break, and is in all fact just being a giant jerk to her. Sure, he's training her for Phoenix, but let's be honest, he probably still hasn't gotten over Jean Grey. Come on dude, she's been dead a while, move on. 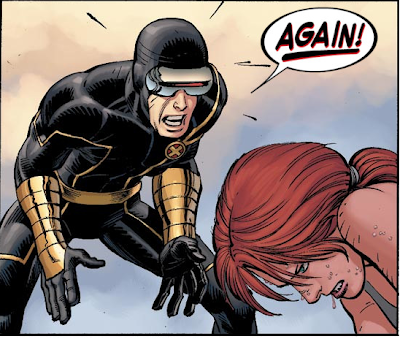 Meanwhile, at the White House, Iron Man and Cap are letting the cabinet know about the impending doom of Phoenix. Iron Man's alarm goes off, letting them know that an energy signal similar to Phoenix's is on Earth. Captain America goes off to find the source of the energy. He sees Wolverine en route, to make sure of his loyalties. Cap arrives at Utopia as Cyclops is telling the other X-Men about how he wants to use Hope as Phoenix to restore the mutants to glory. You also see just much Wolverine and Cyclops are becoming more like Xavier and Magneto respectively. 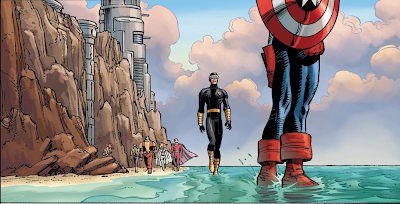 The two naturally disagree about how best to handle Phoenix, and Cyclops decides he's done talking about it. 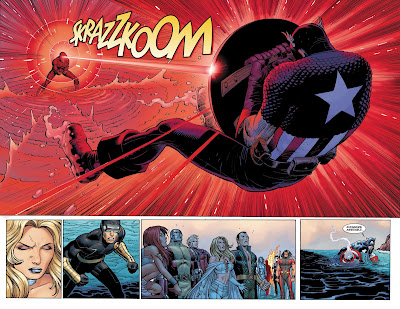 The drawing in this issue is pretty good. It does have some rough around the edges qualities to it, but nothing too bad. It's mostly noticeable in the conversational frames. The action scenes are superb though, and I giggled like a little kid again when I got to the frame I put above. I mean, Cyclops has got a pair on him if he's going to attack Cap like that.

We're in for a wild ride with this series, and the next issue comes out in just two short weeks.

Posted by ElfangorTheAndalite at 11:01 AM