For a while, it used to be six inches or nothing for Marvel fans. A few years back, Hasbro introduced Marvel Universe, and Marvel Legends slipped by the wayside. Now, Marvel Legends are back, and (for the most part) better than ever! The first series back brings us everyone’s favorite God of Thunder, Thor! 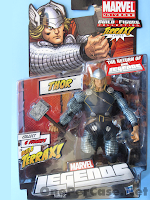 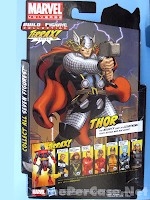 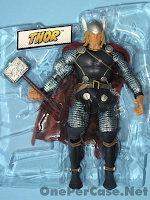 Avengers mania seems to be everywhere these days, and the return of Marvel Legends is no different. Seven new figures, and three of them are Avengers, which is a pretty good percentage. I know I’ve said this before, but the packaging on the new Marvel Legends line is awesome. The card art features vibrant colors, comic style graphics and quality graphics. An all around win. A little deceptive in that it advertises the Terrax build-a-figure and doesn’t come with a piece, but when you have a six-piece figure and seven figures, someone has to go without. 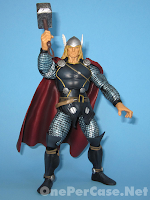 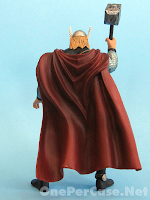 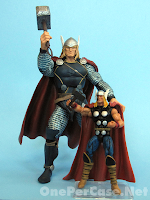 The figure is six plus inches of Thor goodness. He’s nice and sturdy, stands on his own two feet without much assistance and looks like a tough guy, which he is. The sculpting is great. Compared to a Marvel Universe Thor, you get better detail and better sculpting, as you should with a larger scale figure. 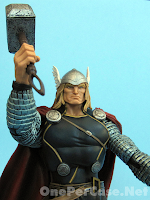 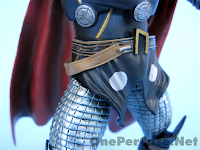 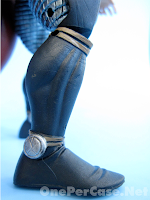 From head to toe, the Marvel Legends Thor features a lot of detailing in the sculpt. Nice winged helmet, great looking boots with buckles, shiny armor and a belt that looks great. The molded cape looks like it’s flowing down his back and is sized just right. The blonde hair, blue eyes and snarling face are a fantastic plastic representation of the images of Thor on the card art. Overall, I really can’t find much bad to say about the sculpt of this figure. 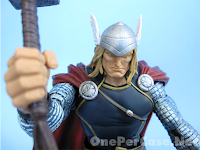 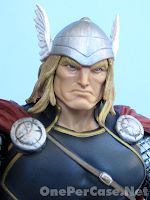 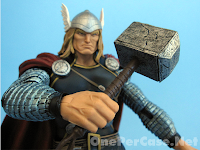 Thor has the standard articulation for Marvel Legends and figures of this size in general. Plenty of movement in the upper and lower torso. My only complaint is that the head can’t be tilted up or down. When you have a God of Thunder, it’s nice to be able to get him to look to the sky. Other than that, he can achieve just about any pose you could expect him to. 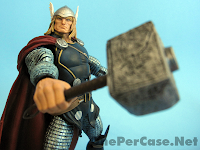 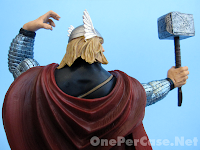 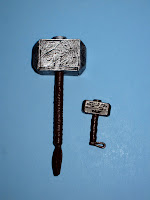 Thor’s only accessory is the only accessory you would really need him to have, his might hammer Mjolnir. It’s well sculpted, well scaled and he can wield it reasonably well. I do think it’s a nice touch how the Marvel Universe Thor features a nice inscription, and I would have loved to see that here. You’d think with a bigger scale, it would be easy to do, but perhaps I missed some sort of reasoning. 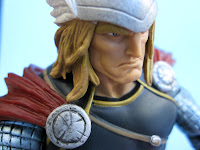 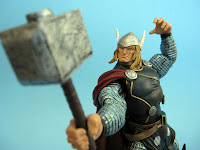 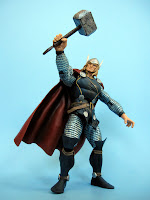 Overall, the first series of Marvel Legends has been strong. Thor looks great, moves great and wields his hammer well. If you’re into the larger scale line, pick this guy up. If you can’t find him in stores, he’s available from BBTS and other fine retailers online. 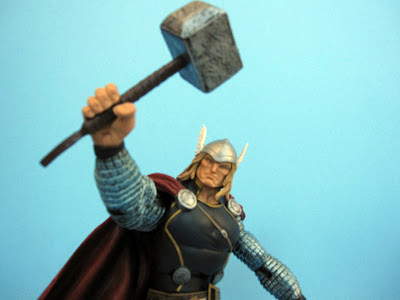