Last week we saw what we have to look forward to in Hasbro's 6-inch Avengers line this summer.  This week, lets take a look back at some of the awesome Legends-scale figures from the previous movie lines, starting with The First Avenger, Captain America.


I haven't been much of a 6-inch collector the last several years.  3.75-inch has been my bread and butter forever.  But between the sudden lack of articulation in many of the 3.75" Avengers figures, the insanely awesome new "Return of Marvel Legends" figures, and some healthy peer pressure from Jason ("Yeah dude, you want those Marvel Legends?  I just happen to have them all for you in my garage."), I'm finding myself being slowly sucked back into the 6-inch game.

I've had a few "Iron Man 2" line 6-inchers on my shelf since those came out, but I've recently started expanding that small display into the other Avengers-based movie lines as well.  We'll take a look at some of those later this week.  But now, let's make Matt wince and tear Captain Rogers out of his plastic prison! 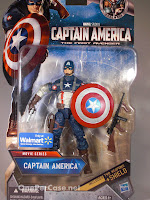 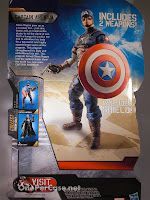 Matt reviewed this figure's packaging for you a couple months ago, but Matt doesn't like opening his toys if he can't put them back in the package.  I, on the other hand, believe that your toys deserve to be free. 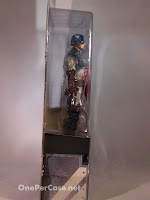 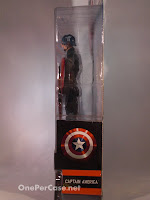 So without repeating everything Matt said, the packaing here is pretty nice.  It's basically a scaled up version of the card back used for the 3.75" "Captain America" line, which has its own unique look compared to the "Thor" and "Iron Man 2" lines, but still follows the same format and features similar design elements as those two other lines, tying them all nicely together.  The bubble features the infamous "Only at Walmart" sticker, and the cross-sell on the back of the card features the only two other figures in this 6-inch Cap movie line: Comic-based WWII Cap, and Movie/Ultimates (take your pick) Nick Fury.  Of note, the sides of the cardboard insert, inside the bubble, don't include any sort of figure number, unlike the 3.75" counterparts. 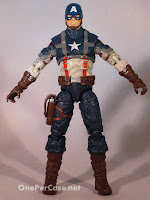 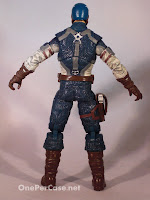 Once free of his plastic cell, this Cap is even more impressive. 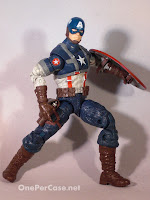 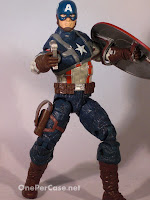 The sculpt, while not quite as accurate as this year's Rocket Grenade Cap, is still much more accurate than the "Super Combat Captain America" that came out in the 3.75" line.  This guy features the more accurate boots, the chin strap on the helmet, and the wider eye sockets in the mask.  He also doesn't look like he's smuggling cookies in his mouth.  The resemblance to Chris Evans is much closer.  And, this sculpt features much more detail than his smaller counterparts.  Check out the texture of the fabric on the uniform. 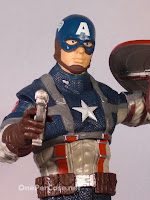 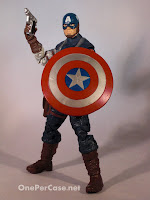 Articulation is impressive, even by modern 6-inch figure standards.  Starting at the top, we've got a ball socket head on a neck hinge, allowing for more up/down range of motion in the head, ball-hinged shoulders with upper bicep swivels, double hinged elbows, ball-hinged and swivel wrists, a mid-torso swivel (sculpted cleverly into the design of the uniform), ball-hinged hips with upper thigh swivels, double hinged knees, and ball-hinged ankles.  Basically, everything that should still be appearing on the 3.75-inchers. 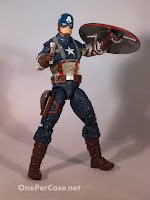 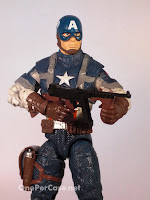 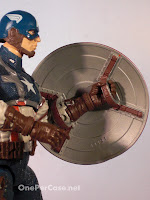 The deco is pretty nice too.  Since I purchased this figure online, I was worried about getting a sloppy paint job, but I can't find anything to complain about on him.  There are subtle black and grey washes that bring out details in the sculpt.  Several small details on the costume are painted metallic silver to represent metal.  The lines are all crisp and smooth, and there is no bleeding or over-spray. 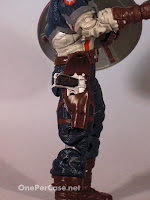 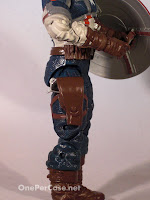 The accessories are about as much as you could expect.  We've got a shield that looks like it did in the movie, a sub-machine gun, and a hand gun that fits neatly into the holster on his leg.  The holster is nice because the flap on it actually closes securely, holding the pistol firmly in place.  The shield is awesome, because unlike the shields included with some other Cap figures, this has the accurate looking straps sculpted onto it, not the terribly looking C-clip and peg.  The straps are even painted brown to resemble leather.  Nice touch.  My only minor gripe about the accessories is that there is no way to secure the shield onto Cap's back. 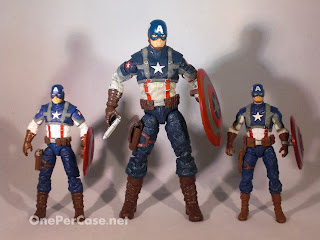 So the verdict?  If you enjoy the movie character designs (I do), this figure is absolutely worth picking up.  The 6-inch line's unfortunate classification as a Walmart-exclusive (yuck) means that the distribution on this whole line is pretty spotty.  This figure came out at some point toward the end of 2011, but as is tradition for Walmart, not all stores carried these figures, and of the ones that did, many of them didn't stock them until after the holidays, instead sending them straight to clearance.  In some areas, you may still be able to find this figure on shelves for either full price, or clearance price.  While clearance price is always nice, the quality of this figure makes it worth even the full price, so don't hesitate if that's your only option. 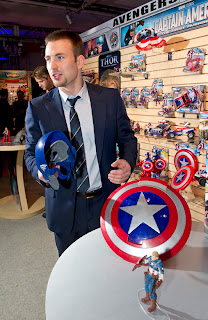 Interesting trivia:  When this figure was first officially shown at New York Toy Fair 2011, Chris Evans himself was photographed with an apparent variant, featuring an un-masked head with Evan's likeness.  This of course was assumed to be a variant that would show up at retail, but, it sadly never did.  Maybe it will in this year's line?  Time will tell.