Every time I hear that Hasbro is releasing a Star Wars exclusive of any sort, I cringe, particularly when I hear it’s coming to Wal-Mart. Over the years, distribution on Wal-Mart exclusives has been way too unpredictable. When it’s good, it floods, when it’s bad, it’s spotty at best. Luckily, the Discover the Force figures seem to have received fairly good distribution. On top of that, it’s a set of solid figure, just like Ms. AurraSing. 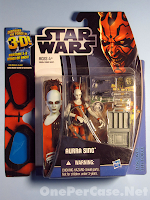 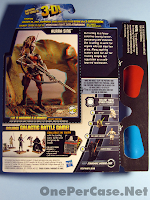 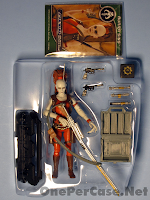 Aurra Sing, everyone’s favorite Episode I bounty hunter. Who doesn’t love a bounty hunter, and of course, who doesn’t love a lady bounty hunter? Well, I can’t say I’m too big on the Discover the Force packaging, but you get what you get. I’m glad that, for the most part, I’m not a carded collector. If I was, I’d be pretty miffed about the 3-D glasses and the odd card shape that comes with them. I would be upset about the huge bubble, but it holds a whole lot of accessories, so I can get with that. 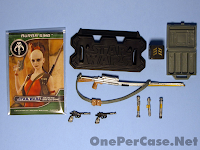 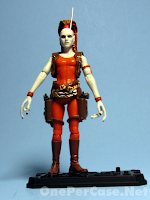 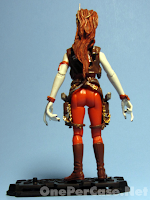 The sculpt on the Discover the Force figures has so far been more or less up to par with the Star Wars Vintage Collection. This latest Aurra Sing looks great. The face sculpt is well done, the accessories look nice and the outfit has a lot of detail. From the beads in the hair to the buckles on the holster, there’s a lot to like about the sculpt and paint on this figure. My only real beef is with the antenna. It’s just so thick that it looks bulky. I understand that a more accurate antenna would snap off like a twig, but still. For me, I’d rather have no antenna than one that becomes so prominent. I fully understand this is a personal preference, but it’s my preference to have. 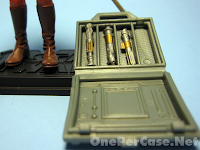 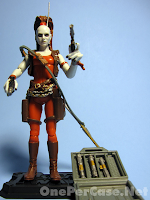 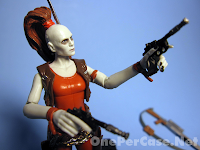 As I mentioned, there’s a big bubble that holds a whole lot of accessories. A sniper rifle, two pistols, a case with three lightsaber hilts, and of course the stand, die and Galactic Battle Game card. So many accessories, I almost felt like this was a GI Joe figure! The pistols fit well in the holsters and in Aurra Sing’s hands, the lightsaber hilts fit well in the case, and then there’s the rifle. It looks good, she holds it well, but the strap is just off. Trying to actually put it around her torso, it’s simply too big and looks really loose. If she’s holding the rifle, then this is irrelevant, but if you want her to stow the rifle and bust out the pistols, be prepared for some awkwardness. 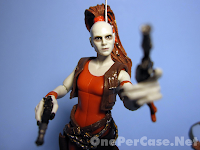 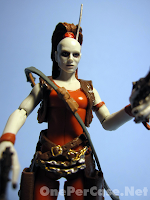 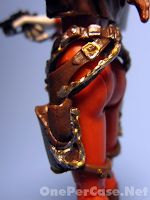 Overall, the articulation is solid. More or less, it’s the same standard points as the best articulated figures (in the 3 ¾” scale). More, she even has a swiveling upper torso. Less, no ankles??? Really Hasbro? Ok, I get that the boots may look better without a joint, but ankle articulation is sure nice. Given that she doesn’t have ball-jointed hips, the lack of ankle articulation can make posing the legs in a stance you want a little tough. Upper articulation, great. Lower half articulation, lacking. If this makes me an articulation snob, then so be it. 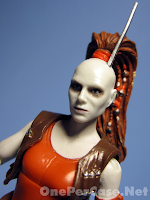 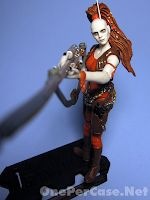 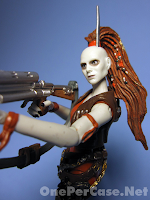 All in all, Aurra Sing is a great first figure for the Discover the Force line. If an entire wave of Phantom Menace figures doesn’t bother you, this is a set worth tracking down at your local Wal-Mart. In my area, they’ve been plentiful, and from what I’ve read on the internet, that seems to go for most areas. 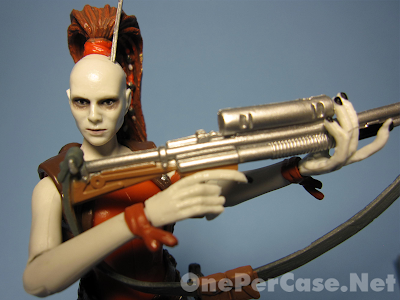