Just as with Rocket Grenade Captain America and Heavy Artillery Iron Man, this Sword Spike Thor (not to be confused with THIS Sword Spike Thor from last year) is Hasbro's attempt at a re-do of a figure from one of the previous movies that may not have been completely screen-accurate the first time around.  Perhaps not so coincidentally, these figures didn't sell particularly well the first time around, either, so it's a little perplexing why Hasbro made this move.  But I'm generally in favor of "more accurate", so I had no reservations with buying the aforementioned Cap and Iron Man (well, aside from the sudden lack of articulation), but this guy... well... is he really more accurate?


While those Cap and Iron Man figures at least featured entirely new sculpts that were indeed more film-accurate, and thus, to me, justified the purchase, this version of Thor isn't exactly a new sculpt.  In fact, if you look at this figure side by side with the first Sword Spike Thor, or Hammer Smash Thor, or Thunder Crusader Thor, or Battle Thor, you'll notice that this is actually the EXACT same sculpt as those previous figures.  There's just one thing missing... the articulation.  It's like Hasbro literally made molds from the previous figure buck and intentionally left out wrist, torso, and ankle articulation.  You can even see the line where the torso joint existed in the mold. 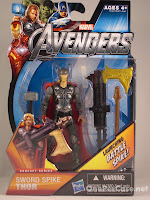 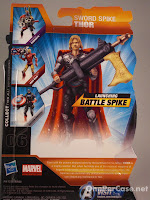 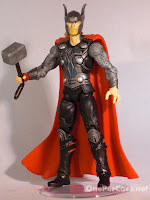 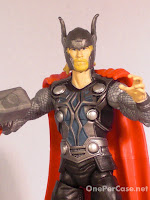 So... if I'm understanding correctly... Hasbro actually spent money to make new molds from the original buck, only to avoid including all the articulation of the original, for what we have to assume is a cost-savings measure.  Considering how much Hasbro always used to tout the huge expense of creating new tooling (you know, back when they used to engage in conversation with fans and collectors through bi-weekly/monthly Q&A's), this seems just a little counter-intuitive.  Silly Hasbro. 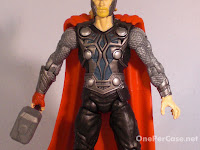 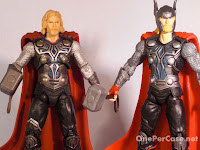 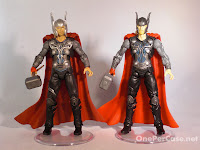 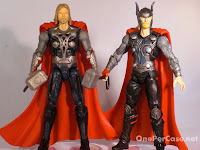 The one new thing here is the head, which, actually does look slightly more like Chris Hemsworth than the previous sculpts.  The helmet is less bulky and looks sleeker, which I like.  That's really the only good thing I have to say about this figure. 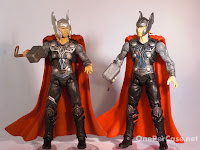 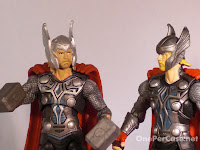 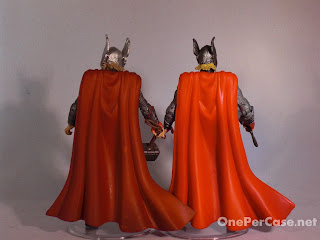 Paint-wise, there's nothing special here.  There are several details missing from the original release(s) of this sculpt, like the silver leg band and the red wrist band.  The cape is a brighter red.  Nothing really exciting. 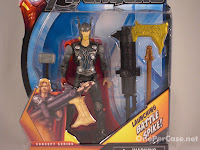 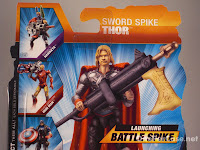 Of interesting note, if the packaging is any indication, we may be seeing a variant of this figure in the same vein as the unmasked Rocket Grenade Cap.  The card back shows this figure with a helmet-less head, that is again a new sculpt (and looks like a pretty mean likeness of Hemsworth).  To my knowledge, this variant has not been found or confirmed to exist, but don't be surprised if it shows up in a future case assortment.  We all know Hasbro loves to drown the market in slightly different versions of this Thor figure.  Exhibits A through D linked above are proof enough of that.

So... if you have ten dollars burning a hole in your pocket with nothing better to spend it on, you probably still shouldn't buy this figure.