Super Shield Captain America.  I'm not sure which is dumber, the name, or the gimmick.  And I can't decide whether or not I hate this figure.  I wasn't going to pick it up originally, but then I realized there were a few parts on him that might make good custom fodder, and he was the only one I hadn't picked up yet, AND, if he totally sucks, I could at least take the bullet for the rest of you readers and let you know how badly he sucks.  See all the awesome things I do for you?  So to finish off my round of reviews on the first initial glut of The Avengers figures, I present to you figure number one in the line... Herpa Derp Captain America!


In case you need to catch up:

This isn't the first Ultimate Captain America we've seen released.  It's not even the fourth.  If you count the Marvel Universe Series 1 release, the CA:TFA movie line release, the repaint of that, and the deluxe figure from that line (Fortress Assault I think?), this is at least the fifth Ultimate Cap.  "But this one has a new hat!" 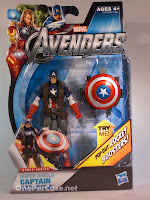 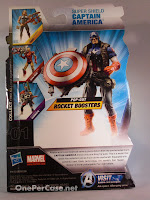 Ok maybe not a new hat, but he does have a jacket/vest thingy, and a new belt, which, as far as I can tell, are both new sculpts.  The jacket is really what got me to plunk down on this figure.  I think I have the perfect use for it with a custom figure I'm working on.  Maybe the belt, too.  That's right, dear readers, by the time you're reading this, "but I have a new hat" Captain America will likely be chopped up and strewn across my laboratory work bench. 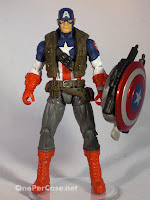 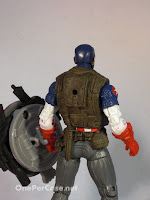 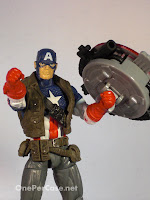 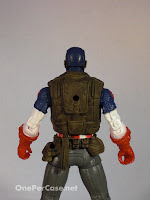 Under the apparently new jacket and belt, this is actually a repaint of the Deluxe Fortress Assault Captain America, or whatever it was called.  I bought that figure just for the shield to give to US Agent, then got rid of the rest.  But this is definitely that deluxe figure buck, not the single carded one.  As such, this guy has slightly more articulation than most figures in the Avengers line (how sad is that?  A deluxe figure from last year is more articulated than a single carded figure from this year... sigh...).  He's got the ball socket head, ball hinged shoulders, single hinge elbows, swivel wrists, ball hinged hips with upper thigh swivels, and single hinged knees.  No waist, torso or ankles.  The sculpt itself has some nice detail, but it's nothing new. 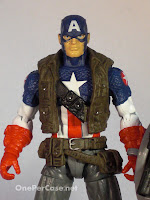 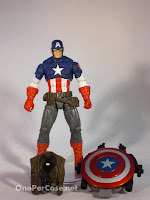 The paint job on this guy is great everywhere except the face.  Every single sample of this figure I've seen has had a horribly painted face.  If I planned on keeping this figure, that would piss me off. 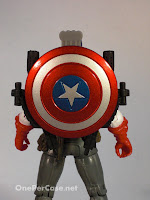 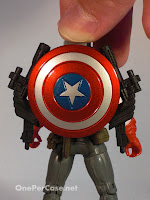 The "super shield" that this guy comes with is a little puzzling.  You push down on a tab, and two things that are either supposed to be guns or jet thrusters pop out, but they don't really look like guns, and they don't really look like jet thrusters.  I'm not entirely sure what they're supposed to be.  But they make the shield awkwardly thick and clunky, which I'm pretty sure is the opposite of super.  Soooo.... yeah.  The shield clips onto the wrist using the same peg/C-hook combo that most Marvel Universe Cap shields use.  And this figure actually has a hole in his jacket/backpack for the shield to plug into, so that's a plus. 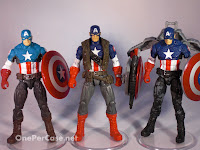 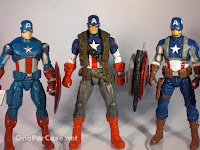 Basically, the only good thing about this figure is the jacket and belt, which actually look really good, but are actually glued in place.  I broke the glue holding the jacket secure, and it pulled a little of the paint off with it.  The only reason you should consider getting this figure is for this jacket and belt, if you need them for a customer figure or something.  Otherwise, don't bother with this guy.  If you need an Ultimate Cap, you have plenty of other, better options to choose from. 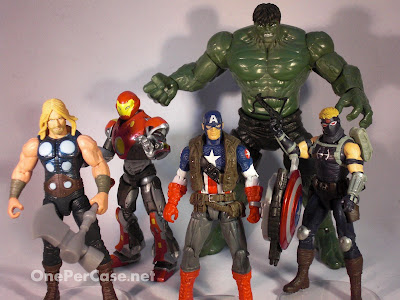 So that's it for the first couple waves of Hasbro's The Avengers figures.  The next wave of single carded figures, wave 3, should include Black Widow and movie Hawkeye, as well as the mysterious alien villain, according to Hasbro at New York Toy Fair.  That wave hasn't gone up for pre-order yet, though, so I don't expect it to hit until some time after the movie is released.  If other Marvel movie lines are any indication, we also shouldn't expect anything past what's out now to be easily found at retail, so I'd recommend pre-ordering from our friends at BBTS, or other fine online proprietors of little plastic men, once available.

But don't worry, just because there's no more Hasbro Avengers figures to review for a while, doesn't mean we won't have some special Avengers themed stuff going on before the movie hits theaters...
Posted by Zak Sousa at 6:35 PM