I'm a fan of variants.  I'm also a big fan of unmasked head sculpts, showing the character's secret (or not so secret) identity.  So picking up this variant of Rocket Grenade Captain America was a no-brainer.  The only problem, and the one thing I'm not such a big fan of when it comes to Hasbro's variants: distribution.  I've seen nothing but the masked version throughout my area.  Thanks to my buddy Solidwii from the forums for hooking me up with this guy.  Take a closer look after the jump. 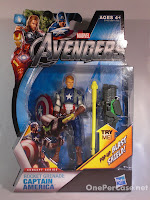 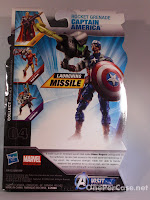 When Hasbro revealed figures with head sculpts based on Robert Downey, Jr. and Don Cheadle (not to mention Black Widow) for the Iron Man 2 line, I was stoked.  I was going to buy so many of that RDJ figure that I'd go broke.  I'd have one for my office at work, one for home, five more to steal the heads off of and put on the other movie armors, another to put on a suited body, and maybe one just to carry around in my pocket.  But then Hasbro did what Hasbro does best, they stuck those three figures into a 3-pack, announced it as a store exclusive at the tail end of the line, and then canceled it, leaving the line feeling horribly incomplete. 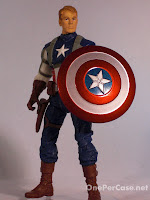 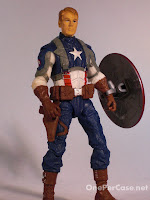 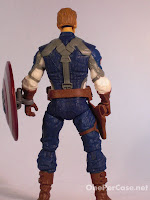 So I'm glad to see this unmasked Steve Rogers get out there in the first wave of The Avengers line, and I'm hopeful (just slightly) that this means we might just see the RDJ head released yet in this line. 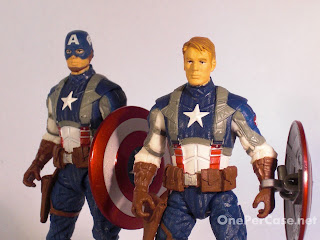 But back to Cap.  This variant was never actually announced (what, tell your customers about what products you're releasing?  Why would Hasbro want to do that?), but it was revealed back in late January when Toys R Us' Canadian website put the figures up for pre-order, and used a press photo of the unmasked figure.  Then at Toy Fair in NY, the masked version was shown. 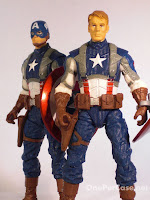 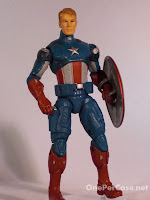 I won't rehash my whole review of the masked figure, you can read that to find out the good and bad about the sculpt, articulation, etc.  But as for the head sculpt itself... it actually bears a pretty decent likeness to Chris Evans, for a 1:18th scale head.  The sculpt is good, that paint is pretty decent, and it looks like Captain America, which is exactly what it should do.  I'm glad to have my hands on this guy, and plan to pick up at least one more... the head fits well on the Shield Launcher Cap... 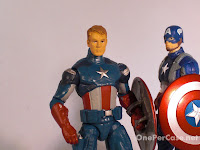 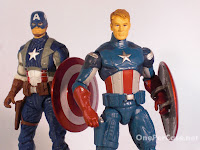 It is a little loose on the Super Combat Cap, though.