If you were surprised at my review for Ultimate Hawkeye, here's one that'll surprise you even more.

Yeah, I said it.  What're you gonna do about it?  You're going to click that "Read More" link, that's what.  Why?  Because you want to know how in the world an under-articulated re-do of one of last year's peg-warmers can be called "kick ass", that's why.  Now stop asking yourself all these questions and get to clickin'!


Last year's "Captain America: The First Avenger" movie line gave us lots of comic-based figures, and very few actual movie figures.  The ONLY movie-based Cap we got, Super Combat Captain America, wasn't a bad figure at all, despite the fact that it seemed nobody was buying them.  It was actually a pretty well-designed figure, with lots of articulation, a great movie-accurate shield, a functional holster, and lots of detail in the sculpt.  Hell, I bought two of them.  Mostly because I felt kind of bad for him hanging around on the shelf so long, but still.  I didn't regret picking that figure up at all. 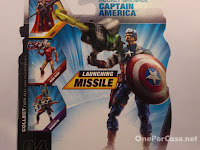 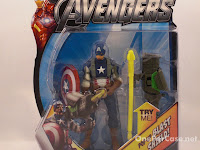 There was one thing it wasn't, though.  Movie-accurate.  The figure lacked a few details on the final movie design of the costume, like the chin strap and the larger eye sockets of the helmet.  The face sculpt was a little chubby and didn't actually look like Chris Evans.  The body of the figure was just a little stumpy looking, like the suit was full of padding.  Like he was a kid going out to play in the snow or something. 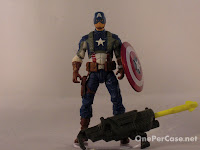 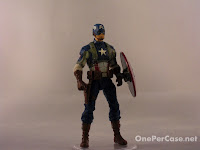 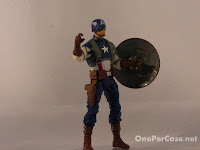 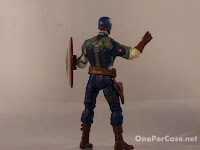 So Hasbro decided to go back and give this guy another shot, making him look more true to the movie design.  They did the same thing with the Heavy Artillery Iron Man (Mk. VI), and the Sword Spike Thor (coming up in a day or two).  I'm generally not a huge fan of re-do's, unless they're significantly better looking.  This guy is significantly better looking.  The eye sockets are appropriately larger, the neck is now painted flesh-tone instead of blue, the chin strap is there, and he doesn't look like he has a mouth full of cookies. 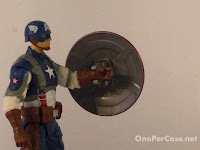 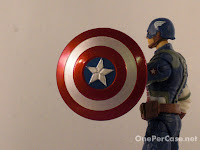 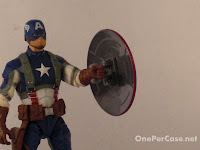 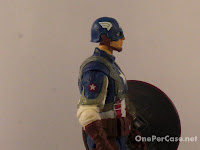 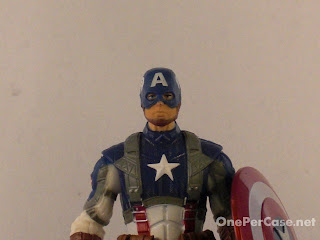 The face actually looks like Chris Evans.  He's leaner, and doesn't look like he's wearing a snow suit.  And the lines of the costume overall just look more true to the screen worn suit. 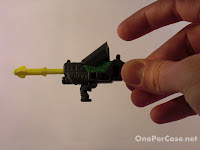 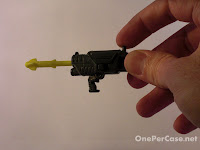 The "Rocket Grenade" launching accessory can be easily dismissed, and the shield included with this figure is a little peculiar.  Instead of the sculpted straps used on other movie Cap shields, it has the rotating peg/wrist clip seen on Marvel Universe versions.  This is especially peculiar because this Cap doesn't have a peg-hole in his back to plug the shield into.  You know what that says to me though?  It says Hasbro is telling us to trade shields with the Super Combat Cap.  Because that figure DOES have a back hole, and included a shield without the peg.  So, easy fix.  Swap shields.  The more movie accurate looking figure gets the better detailed shield, and the less accurate now gets the peg shield.  Problem solved. 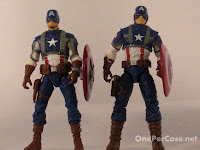 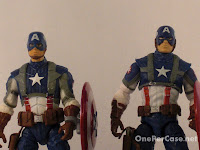 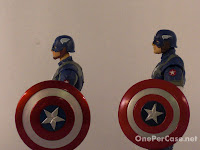 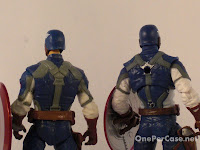 The only real disappointing aspect of the accessories is the pistol/holster.  The pistol is sculpted into the holster, it's not removable.  It's also not painted, so it blends right in with the brown of the holster.  This is also pretty easily remedied though:  just give him Super Combat's handgun.  True, it won't have a functioning holster to go into, but of well.  I may actually try a holster-transplant between the two figures soon.  If that works, I'll post an update. 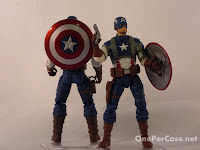 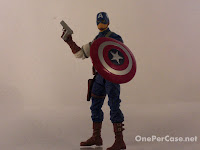 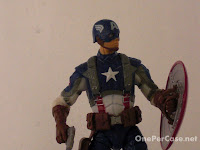 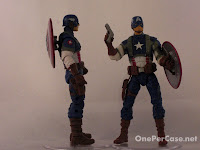 The articulation on this figure is the same as the rest of the line, no wrists, ankles, or torso/waist.  For some reason, I'm not too bothered by it this time though.  I just love this sculpt so much it outweighs the lack of articulation.

The first several samples of this figure I saw in stores had pretty shoddy paint on the face, but the last several I've found were much better, so as with all other figures in this line, inspect it carefully before buying.

If you can't live without the articulation but want the better head sculpt at least, the heads are easily swapable.  I think the new head looks just a little small on the older body, though.

Also in typical Hasbro fashion, there's an unannounced variant to this figure.  Some cases include an "unmasked" version with a Chris Evans head sculpt.  I'll do a separate article for that version once I get ahold of it, but so far it only seems to be hitting certain parts of the country, and not mine.  As is tradition.

So is this figure ground-breaking?  No.  But detail and sculpt-wise, it's a significant improvement in likeness over the previous version, and that kicks ass.