This figure kind of came out of left field.  He was originally announced at NYCC in 2011, along with Ultimate Thor, but then there was no more mention of him.  When the first two Avengers waves went up for pre-order on online retailers in January, he was not listed in the only Wave 1 case assortment (Revision 2) that the online stores were offered by Hasbro, leading many to speculate that this figure would not show up until Wave 3 or later.  Then, a couple weeks before the "street date" for The Avengers product, Walmart started putting out Wave 1 figures, and BAM, this guy was packed two per case.  I like when we're pleasantly surprised like that.


So this guy IS in Wave 1, just not the W1 revision carried by BBTS and the rest of the online shops.

The figure itself, like the rest of this line, is chock full of good and bad. 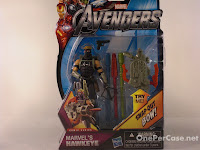 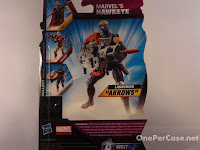 The packaging is the same old song and dance, but with purple accents on the card and blister this time.  This figure actually looks pretty sharp in package. 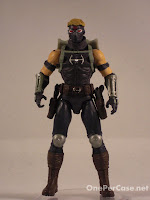 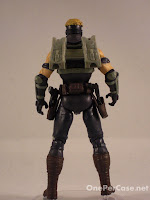 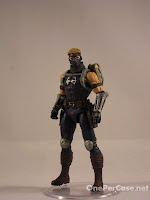 Sculpt-wise, this Hawkeye rocks!  Check out the detailing in the musculature.  And the arm bracers.  And the belt.  This is a great detailed sculpt.  High five to the sculptor.  He looks dead-on to his appearance in Ultimates 3.

Unfortunately, that's where the greatness ends, and the rest fall in between "decent" and "meh". 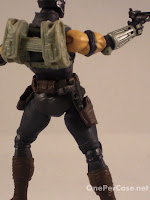 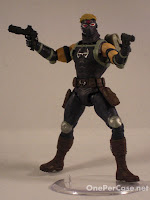 The paint is almost great.  Except for the fact that on every sample I've seen so far, including the one I wound up buying, the silver paint used for the arm bracers, belt buckle, and knee pads is smeared, smudged, over-sprayed or under-sprayed.  My Hawkeye is missing some of the silver from the belt buckle, and has a couple silver spots on one hand and behind a knee.  This isn't a huge deal, but still, it's annoying.  The paint on the face is sharp, but again, that's something you'll have to watch for, as I've seen a few with smudged silver around the eyes.  The QC is definitely not what it should be on this line. 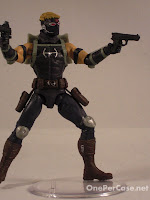 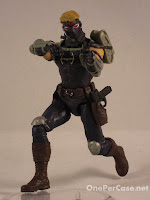 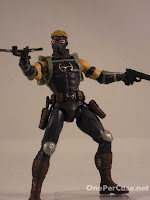 As for accessories... He comes with a good amount, they're just not good quality.  I will give Hasbro points for giving the figure two functional holsters that the handguns (kind of) fit into, but the guns themselves are slightly too big for the holsters, so they stick up high in them.  The handgun with the scope and extended magazine is also made from some really rubbery plastic, and the rubber band used to hold it in place in the figures hand while in the package has severely warped this accessory in every single sample I've seen.  The other handgun is sturdier, but it's almost comically over-sized for the figure.  The crossbow is decent, but nothing spectacular. 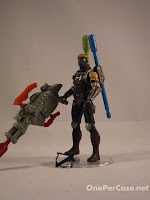 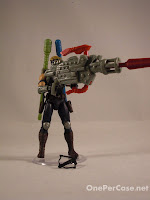 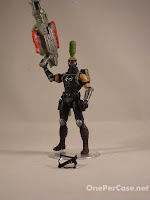 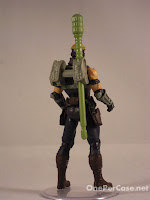 The giant spring loaded missile launching bow, though... now this is just dumb.  It's so large and heavy that the figure can barely hold it, and thanks to a lack of wrist articulation, getting it into a two-handed grip is impossible.  This whole accessory is a giant waste of plastic.  And it comes with 3 brightly colored missile arrows, any two of which can be stored on the figure's back in his pouches.  Points for storage functionality, but I still say meh to the whole concept of this accessory.  I'd much rather see a normal bow.

So that brings us to the very awkward elephant in the room, articulation.  Like the rest of this line so far, Hawkeye has no wrists, ankles, or waste/torso joints.  On some figures, I don't mind this too much, but on this figure, it's just not acceptable.  Aside from making it impossible to hold his primary accessory correctly, getting Hawkeye into pretty much any natural looking action pose with his weapons is impossible.  Hawkeye is an agile character, and his figure should reflect that.  In this regard, the figure kind of blows.

If you're not a fan of Ultimates, this figure might be worth passing on.  There's a lot here that I like, but also a lot that really could have and should have been done better.  Between the sloppy paint, half-assed accessories, and lack of critical articulation, I'm 25% excited and 75% disappointed by this figure.  The sculpt detailing really is the one redeeming characteristic for me.

I have no clue why Hasbro only offered the online retailers revision 2 (was there a revision 1?!?), so your only real bet for getting this guy at the moment is through Walmart.  I've seen several around town in the last few days, but they don't stick around long.  If you want him, and that's a big IF, grab him when you see him.  He may not be there in five minutes.  He *DOES* look good posed with the rest of the Ultimates figures released so far. 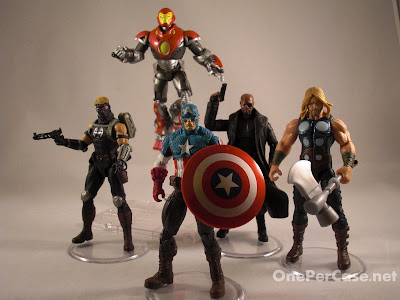