It’s like a diet Quinjet.  When a hand-painted sample of this vehicle appeared in Hasbro’s Marvel Universe diorama at SDCC 2011, many fans assumed Hasbro had cheaped out and this would be the Quinjet for the Avengers line.  Well, this IS kind of a cheap cop-out, but it’s a good cheap cop-out…


This isn’t THE Quinjet from the movie line, but it’s a nice companion vehicle to it.  The actual Quinjet is larger, more expensive, and has more functionality.  It also comes with an equally terrible pack-in figure.

This jet IS, however, a cheap repaint of the Justice Jet from the Captain America movie line.  Only it looks much better in this paint deco.  I didn’t buy the Justice Jet, because it looked cheesy and dumb.  The Firestrike jet looks pretty awesome though, with its red and silver paint scheme. 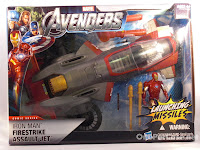 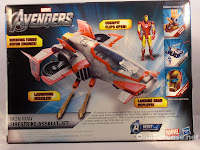 The packaging is nothing spectacular, standard window box with an Avengers logo.  The presentation of the jet inside the window box is basically identical to the Justice Jet version.  All the rear wings and tail fins are packed under the jet and take only a moment to snap on once opened.  All the details are painted on, no decals this time around. 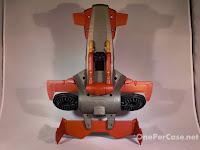 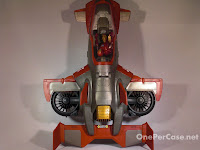 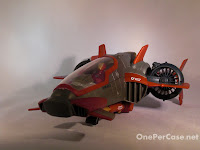 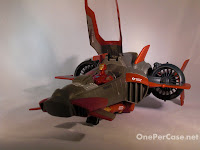 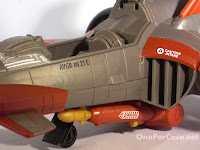 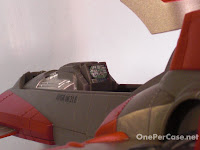 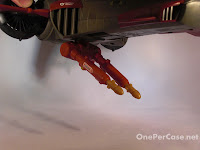 The jet itself features a double missile launcher, deployable landing gear, rotating thrusters, and an opening cockpit.  That’s it for play functions.  But it does look pretty good.  The missile launcher has a great range of motion with its swivel and hinges. 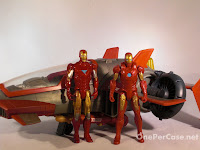 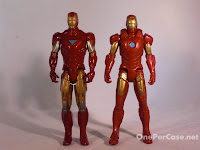 The pack in figure is just as terrible as the one from the Quinjet, so I won’t even get into detail on him.  Needless to say, if you decide to plunk down the twenty bucks for this vehicle, you’re buying it for the jet and not the figure. 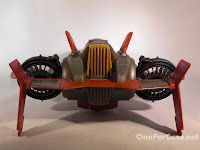 The idea of Iron Man flying around in a jet is pretty lame, but that’s more for the kiddie playability factor.  I’ll likely have this thing piloted by movie Hawkeye once that figure comes out, since we don’t seem to be getting a sky-cycle for him. 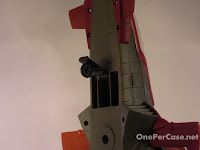 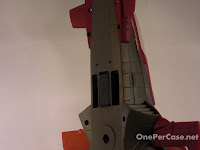 So is this thing worth the price tag?  $20 is just a little over-priced in my opinion, considering the quality of the pack-in figure, or the overall size of the vehicle.  If the figure were better, or the jet were a little bigger, sure.  I remember a few short years ago when $20 would get you a full size starfighter vehicle in the Star Wars line, though, so seeing what little we get for the same price in 2012 stings a bit.  Also, the Assault Armors are the same price, but feature better figures, more functionality, and more plastic involved in their construction, so I really have no idea why this little jet costs what it does. 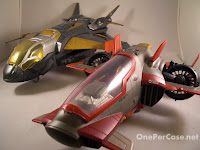 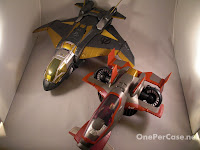 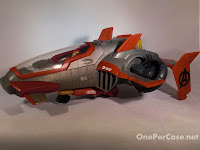 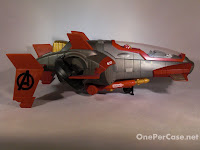 I don’t personally regret paying twenty bucks for this thing, I think it’s a cool little vehicle, but your mileage may vary.  I wouldn’t be surprised to see these things pop up in Ross for half price later this year, though, which I’m sure a lot of people will wait for before buying.  I may pick up a second one if that happens, but for now, this guy goes nicely next to the larger Quinjet.

The Firestrike Assault Jet is available at most retailers now, and online through BBTS.
Posted by Zak Sousa at 10:44 PM