As a long time Star Wars fan and toy collector, I was thrilled when Hasbro began releasing Star Wars figures based on Ralph McQuarrie’s original concept artwork. Many moons ago, my sister got me the trio of “Art and Making of” Star Wars books for Christmas, and I loved seeing the progression of characters from concept to reality. Well, movie reality, anyways. Hasbro went on to make a few more concept figures, based on art by Warren Fu and others. I have to give Hasbro some credit. The idea of Star Wars Concept figures was a risky proposition, and they went for it. Based on how tough many of the figures were to find (initially, at least) and the fact that they were re-released in box-set form, the Star Wars Concept Figures have been a success.


Well, it’s been a while now since we’ve seen any new figures based on concept art, so how about it Hasbro? I think it’s time to start giving us more, and here are some suggestions. 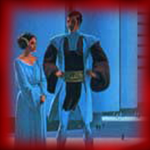 Lando Calrissian
Face it, he’s a major player in the original trilogy, and the most famous out of any character on this list. Ralph McQuarrie made some amazing concept art for , so there’s no shortage of reference material. He’s no Billy Dee, but still, we gotta have a Lando, don’t we? 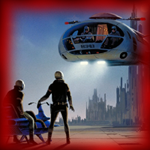 Wing Guard
While we’re up in , how about a Cloud City Wing Guard concept figure? The source material on this one isn’t quite as good, but should be more than enough to pull a design out of. I don’t expect to see the flying ship, but I’d love to see a plastic version of the Bespin Highway Patrol. 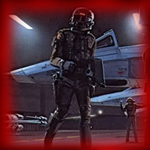 Rebel Pilot Yes, that’s a rebel pilot. You can tell because he’s clearly running through a rebel hanger. Sure, he looks a bit more like a Tie Fighter pilot, but is that a bad thing? The Tie Fighter pilots have one of the coolest designs around, so getting a rebel version of that would be just fine. 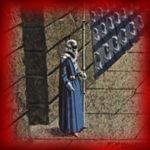 Rebel Honor Guard
This is one of those where I think the concept art looks better than the finished product. Luckily, it’s not too hard to see that this design influenced the Emperor’s Royal Guard, and possible the Senate Guard later. Definitely a different enough design to make a great figure. 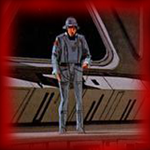 Imperial Officer
Basically a background character in a McQuarrie painting of Vader on the Death Star, but that’s good enough for me. Bottom line, as things stand, we could use some more Imperial concept figures to help balance things out. Hasbro could clean up the design a little, and this would make a great figure. 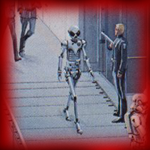 Death Star Droid
Once again, more or less a background character, but a cool design nonetheless. He’s similar enough to tell who it is, but different enough to make a cool concept figure. The limbs are really thin compared to the frame and head, but that worked well on the concept IG-88, and it can work well here. 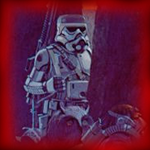 Sandtrooper
Ok, I’m not sure if this is actually a “Sandtrooper” per say, but he’s in concept art for the Cantina, and we already got a concept Stormtrooper, so I’m going to say he’s of the sand variety. Besides, even if he is just a Stormtrooper, the fact that Hasbro released two versions of the Snowtrooper concept figure shows that they’re not afraid to double up when it’s appropriate. 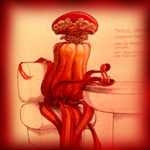 Cantina Alien (Ambulatory Plant)
I’ll be realistic. The same things that make this such a great design are probably the same things preventing Hasbro from making this figure. It’s such a different design, I’m not quite sure how this would translate into a 3 ¾” figure. But that’s why they make the toys, not me. Besides, they did a pretty nice job with Dice Ibegon, so Hasbro, where there’s a will, there’s a way. The fact that the sketch says "Ambulatory Plant" is enough to warrant something being done. 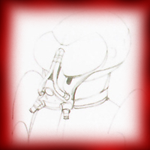 4-Lom
Unfortunately, I couldn’t find much more in the way of source material for this one other than a light upper torso sketch. But the fact is, that sketch is intriguing enough to make me want to see more. Even if Hasbro has to fudge a little on the body design, this would make a great addition to the concept bounty hunters. 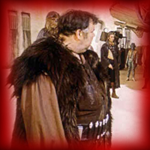 Jabba the Hutt
Ok, this doesn’t technically count as a “concept” figure in the design sense, but I think it fits in the overall spirit of things. It’s a design of the character which didn’t make it to the finished product, and the finished product looked significantly different. Isn’t that what a “concept figure” is all about? Let’s get Mr. Mulholland some recognition! 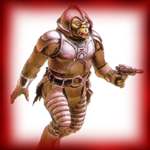 Gamorrean Guard
No doubt about it, definitely different enough to warrant a figure. In fact, other than the basic helmet shape and the fact that he has green skin, this guy has little in common with the porcine guards we all know and love. But so what? It’s a cool design, and he’d go great guarding that human Jabba. 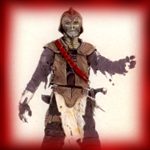 Wooof
The head and overall body are pretty much the same as what we got in the final design, but the outfit is different enough to make for a cool concept figure. For me, the difference between concept and finished product is very reminiscent of the concept Ki-Adi Mundi that we got. So yea, Wooof, but more of a pirate look. Eye patch not necessary. 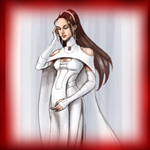 Padme Amidala
Next to Ralph McQuarrie, Warren Fu has made some of the best Star Wars concept designs around. This original design of Padme in a white gown would make for an amazing figure. I’m not quite sure what a good blend would be in terms of soft goods vs. molded for the gown, but done well, this would make for a great figure. 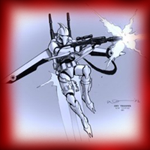 Republic Skytrooper
Another great concept from Mr. Fu. The overall concept looks to be somewhere in between a Clone Trooper and a Stormtrooper, with a bit of Durge mixed in to the helmet design. Strap a jet pack on something like that, and give him a cool blaster, and you really can’t go wrong.

There are still plenty of other great concept drawings and paintings out there to choose from, but this is a great list to get Hasbro going again. The Star Wars concept figures were a hit for the 30th Anniversary Collection, so let’s start seeing some more. I’m sure there’s some great ones I left of the list, so please, comment below and let me know who you want to see.


Thank you mainly to Wookiepedia, starwars.com, and of course Ralph McQuarrie, Warren Fu and anyone else involved in this amazing artwork.
Posted by Brett X at 10:00 AM